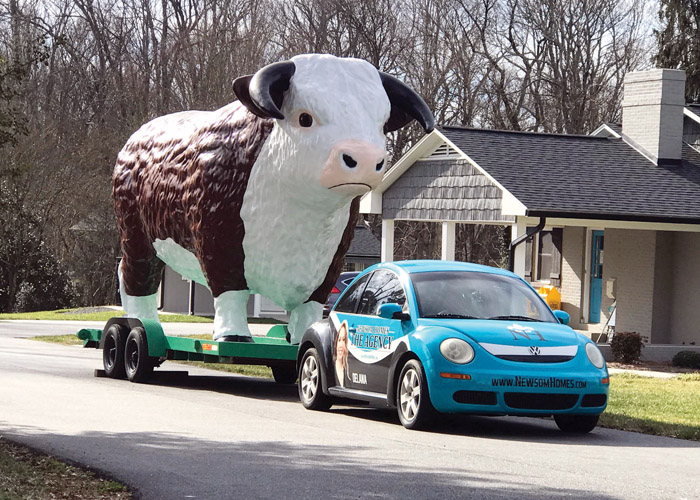 Most of the people driving along U.S. 158 through Clemmons have noticed a recent addition to the landscape. Hey, you can’t miss it.

There’s a bull that stands 11 feet tall and weighs around 2,000 pounds in the driveway of one of the local businesses just a few doors down from Village Hall.

Of course, inquisitive minds want to know where it came from and why it’s sitting on a trailer behind a VW Beetle parked at The Agency — Newsom Homes.

Actually, the story has deep roots that go back to the 1950s when the bull was bought in the late 1950s and placed in the parking lot at Staley’s Charcoal Steak House on Reynolda Road in Winston-Salem, where the iconic sculpture became known as the Staley’s Bull. Apparently, there was a replica made by the same company at the time.

Fast forward to early January in 2020 when Fratellis restaurant, which is now located in that location (Staley’s closed in 2003), brought back what was said to be the original Staley’s Bull in a story published in the Winston-Salem Journal, but the next day the rightful owner came forward and said it was a case of mistaken identity.

It seems that the bull now in front of Fratellis came from a butcher shop on Waughtown Street in Winston-Salem and has a similar look to the Staley’s Bull, which was purchased several years ago by Steve Newsom, where it has been displayed in parades and similar occasions but spends most of the time in storage.

His wife, Delana Newsom, who owns and operates the real estate agency in Clemmons, said that the bull was pulled out when photos were taken for the recent newspaper story and just hasn’t been put back.

“People like to come by and take pictures,” she said. “He just makes everyone smile. We enjoy the way the children respond to it. They just always get so excited. That’s why I’m so fond of it. The children love it.”

Delana admits she does, too.

“We use it as our mascot at the office,” she said with a laugh.

Well, the Business 40 project in downtown Winston-Salem is finally done, and so is the name.

The Winston-Salem Dash had what was called a “pop-up party” to celebrate the pending opening of the primary throughfare through downtown last Saturday.

We decided to check it out, and I couldn’t believe the crowd that was there for the once-in-a-lifetime opportunity to walk a section of the eastbound side of Salem Parkway bordering BB&T Ballpark.

Bolt, the team mascot, led a long procession down to the new road, and it was a neat, but somewhat eerie vibe, to be out on the road on foot instead of behind the wheel.

The view on the parkway provided an up-close view of the new bridges and brick walls along the exit ramps. The new Green Street pedestrian bridge, which is a suspension bridge with arches, isn’t open yet, but it will serve as a gateway crossing the road near the entrance to the stadium.

There is also a multi-use path that will run parallel to Salem Parkway from downtown to Wake Forest Baptist Medical Center.

The main parking lot at the ballpark was packed as well as other lots surrounding the ballpark as the curious local community turned out for the historic occasion on a chilly day. There was music and lots of fun activities for kids, including a bounce house, along with hot dogs, drinks and even cake.

Then on Sunday morning, the parkway officially opened for traffic. Of course, we had to check that out, too, and it was a smooth ride through town.

The reopening took a little over 14 months, which was about six months ahead of schedule — and certainly most welcome for those who frequent downtown.

Or is it Salem Parkway? Those driving the roads will figure it all out, but one thing’s for sure: Business 40 is gone. Forever.