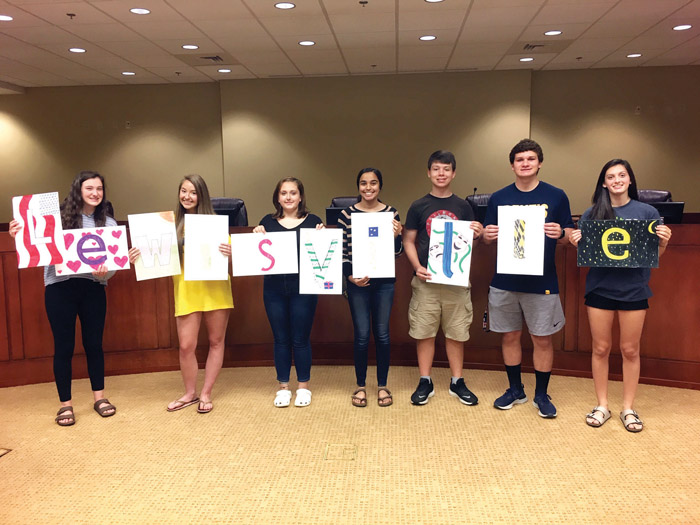 Students spell out “Lewisville” by displaying artwork showing their love for the town, which resulted in composing a song. Photo courtesy the Town of Lewisville 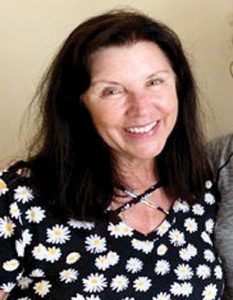 When a group of Lewisville students joined the Student Leadership Committee to learn about local government and community involvement, they didn’t know it might entail helping compose a song about their love for the town they call home.

However, attending various town meetings and helping out with different events in Lewisville provided the right mix for the dedicated youth to work with Stacy Howard, who is the town’s events manager/office manager, to produce a song that already has more than 7,000 hits in a short time on Facebook.

Having Howard, a longtime songwriter who has claimed her share of honors and awards over the years, was a boost to the effort in producing “Lewisville,” a music video posted in December 2019 that included the scenes and events from the town throughout the year.

“The brainstorming session with these students was a wonderful experience as they each provided their many reasons for their love of the community,” Howard said. “I know the students were all very eager to learn about the songwriting process and watching a song and video develop was both joyful and educational.”

Howard combined their ideas and observations about the town, shaped them into the framework for a song and enlisted the help of a local business, Ryan Reedy Multimusic Media, to assist with the studio recording and video production.

The Student Leadership Committee (SLC) was established in 1999 at the request of the town council to involve local youth in the entire municipal government process. The group typically meets once a month, and membership is open to students from middle school through high school. Howard said that around 20 students participate each year.

“A lot of kids want to have volunteer hours, and this is a great way for them to do it,” she said. “They learn a lot about how government works at a young age and a better understanding about the community, and they’re good helpers.”

The students will attend various committee, board and council meetings and report activities of the various groups to the SLC. Each student also will also select at least two events sponsored by the town in which they participate as part of their learning process.

Howard said that those in the group have also chosen various charities and organizations to help throughout the year including Forsyth Backpack Program, collecting warm winter clothing for the homeless in Forsyth County, collecting clothing for a women’s shelter in Forsyth County and gathering healthy snacks for the homeless through Samaritan Ministry.

Being a part of putting together a song about Lewisville was an added challenge for the students, who had an advantage in having a mentor such as Howard — who has been writing songs since she was a teenager.

“I asked my parents for a guitar for my 13th birthday,” Howard said. “I wanted to compose my own songs just like Dolly Parton. In 1999, I actually won a karaoke contest in the country music category on The Queen Latifah Show, which was broadcast on national TV. I was flown to New York for the show and had a great time.”

Howard also placed in three other songwriting contests and years ago wrote a song, “The Lights of Blue,” in honor and memory of Howard Plouff, a Winston-Salem police officer who was killed in the line of duty, and for all the men and women of law enforcement who have served, those who serve and those who gave the ultimate sacrifice.

Howard said that the shooting of the video that accompanies the “Lewisville” song started in last spring to incorporate footage of various events throughout the year, concluding with the annual Christmas Parade in December.

“My whole philosophy on this was to get the kids involved and take it one step more,” Howard said. “When you hear a song that you like, you never think about how it was composed or where it was composed. It helped connect them, I think, to understand what you can do with your feelings and how you can put them all together and put them in a song.”

Attend a concert underneath the stars
See a live play performance in the park
Street Parties, festivals, movie nights
In the Square the families gather
In a venue that delights

It’s a slice of heaven
A town that beckons
Lewisville

Here’s to you
Lewisville

Cheers to you
Lewisville

I love living
In a town of giving
Lewisville

Here’s to you, Lewisville

To listen to the song and watch the video, go to the Town of Lewisville Facebook page – www.facebook.com/TownofLewisvilleNC/videos/1152799564924320/