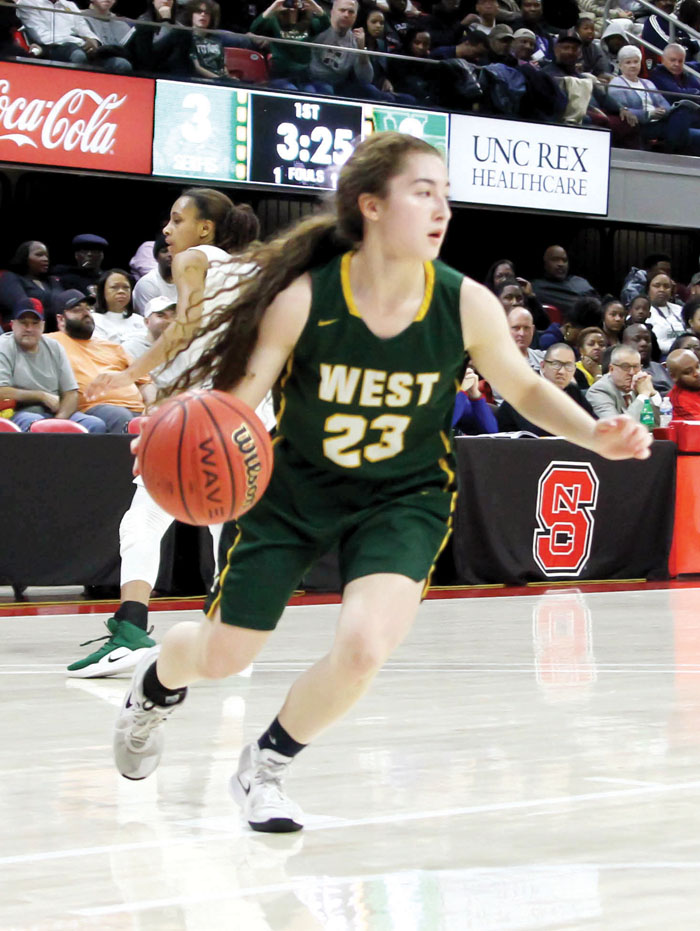 About 45 minutes had elapsed since the conclusion of the West Forsyth girls basketball team’s 55-48 loss Friday night against East Forsyth when Coach Brittany Cox Hudson glanced at her phone at an incoming text message.

It was a hard-fought conference game that saw West come back from a nine-point halftime deficit to take the lead in the third quarter, only to see East pull away down the stretch and hang on for the win.

“It’s from Cat,” Cox Hudson said. “She is apologizing for not being a better leader tonight. That’s just so her and tells you exactly what kind of person she is.”

Cat is Catherine Byun, a senior and four-year starter for the Titans, who didn’t play a single second in the game against East. She’s barely played at all after two concussions in the span of a couple of weeks cut her season short just after it got started back in November.

That hasn’t stopped her from staying involved.

“She has been at every practice, every game, doing everything she can do to support us,” Cox Hudson said. “Well, except for when I had to ban her from practice during exam week so she could focus on her studies. She had to miss some schoolwork when she had her concussions with all the headaches and everything else.”

Catching up on the schoolwork wasn’t much of an issue for Byun, who is taking six Advanced Placement classes this year and is ranked in the top 15 in the Class of 2020.

She has already been accepted into UNCChapel Hill and has a few other schools on her interest list, including Pennsylvania, Duke and Wake Forest.

Not playing has been frustrating. Byun knows it’s for the best. But it’s still hard for the competitor in her to reconcile her role as an observer.

There have been three concussions total, all coming on the basketball court, all of which happened after hitting her head on the court. The first this season came in a scrimmage game against Providence Day in Charlotte in early November, the second coming in the semifinals of the Mary Garber Holiday Classic in mid-November.

“It has been extremely frustrating, especially with the injuries happening right at the beginning of the season,” said Byun, who played in just 2 ½ games before her season ended. “The second one, I couldn’t get up for a while and was really discombobulated. I was having trouble answering our trainer’s questions. My doctor was really worried about me because they happened so close to each other. The first one this season I had was really bad. I had to miss a few days of school with that one. I took about a week and a half on that one because I really wanted to be back for our first game. But when that next one happened, it really set me back even more. The symptoms for that one lasted a lot longer. I’ve since found out that I’ve got chronic migraines. The doctor told me they were genetic, and I was going to get them anyway, but the concussions have sped up the process.”

Byun’s presence on the basketball court isn’t the only team that will miss her services. Also a standout soccer player, Byun is still trying to decide if she will be able to join her soccer teammates in the spring.

“I feel like it’s still up in the air for me as to whether I can play,” Byun said. “I want to play, but it is something I’ll have to talk through with my parents. I’ve been playing basketball and soccer my whole life, and this has been really hard for me, especially because it’s my senior year.”

Cox Hudson encouraged Byun not to rush back and to take as much time as she needed — if she returned at all.

“With injuries, you always have to look after the best interests of the player,” Cox Hudson said. “And knowing that there is so much more than basketball that is ahead of Cat, we were going to be extra careful. We knew that she might not return, which is unfortunate because I really felt like this was going to be a breakout year for Cat. She has always bought into a role for us. Over the summer and in the preseason, I really saw her game on another level. I knew we were going to have a young team this season and I didn’t worry about that because we would have Cat. I’ve never seen a kid lay it on the line like I have with Catherine. That’s something every team can lean on and learn from.”

Byun helped lead West to the NCHSAA 4-A state championship last season, which she said would be one of her lasting memories.

“When that last horn went off, I just couldn’t believe it,” Byun said. “We rushed the court and all hugged, then I remember Callie (Scheier) grabbing me with tears streaming down her face. It was a great moment.”

Byun eventually wants to end up studying sports medicine in college. Her mother is a doctor whom Byun credits with giving her some of her drive.

“Both my parents, they embedded that in me,” Byun said. “They always pushed me, but also gave me space to push myself and made me solve some of my own problems. I think that has served me well in sports and in the classroom.”

“She really doesn’t know how to put herself first,” Cox Hudson said. “When she got here as a freshman, I would ask her everyday after practice how she was doing. One day, she just started crying. I went to give her a hug and asked her what was wrong, and she told me ‘I just don’t want to ever let us down.’ I mean she lays everything on the line. She used to make herself hyperventilate in practice sometimes because she didn’t want to come off the floor. I told her, ‘Cat, this is not OK. It’s fine to ask for a sub every now and then.’”

Byun still clings to a glimmer of hope of returning to the court or possibly the soccer field. Maybe for senior night, maybe not. She has also come to terms with the likelihood she will continue in her current role as scorekeeper, student assistant coach, or even head cheerleader.

“I want to do whatever I can to help my team,” Byun said. “If I can’t be out there playing, I have to find other ways to do that.”

For Cox Hudson, the impact is immeasurable.

“I want the kid with the most heart. The one who cares most about the team,” Cox Hudson said. “That’s Cat. She’s selfless. That’s been her story during her time here. She’s made us better even without being out on the court. That will be her legacy here — that she makes everyone better without having to be out there. And we are better for it.”