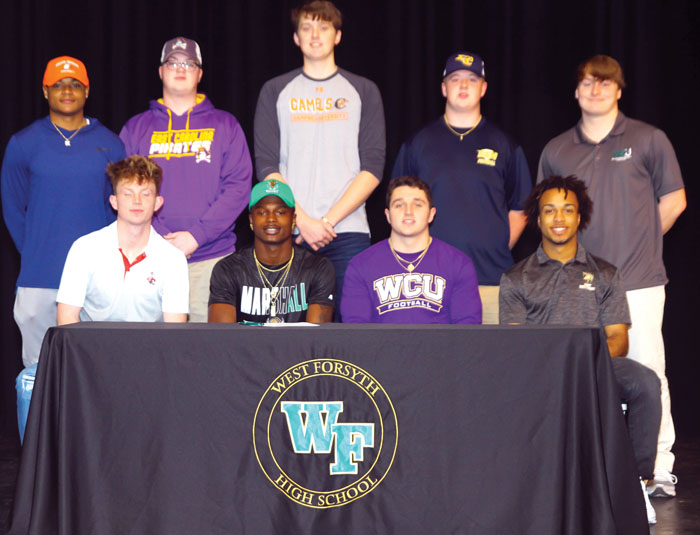 Wilson, the standout running back, Central Piedmont 4-A offensive player of the year, and Shrine Bowl selection, signed with Marshall University.

Copeland will play at East Carolina and Brown will attend Emory and Henry.

Ricciardi, who started at linebacker the last three seasons, signed to play at Western Carolina.

Williams, a defensive back, is headed to Western Carolina.

John-John Dickenson is headed to the United States Military Academy at West Point to play soccer.

Dickenson, an all-conference selection the last two seasons, has been a scoring machine for the Titans.

Connor Monroe, Peyton Brown and Tyler McDaniel all signed to play baseball at the next level.

Monroe is headed to N.C. State. Brown will attend Campbell, and McDaniel will play at William Peace.

Congratulations to all these Titans.

The West Forsyth wrestling team closed out their dual team season last Friday with a loss to Cornelius Hough in the Western Regional championship 37-34.

The Titans’ path in the regional included a 34-24 win against Glenn, which defeated West to win the CPC tournament the week before.

The wrestling calendar will now turn to the individual tournaments. West Forsyth will head to Ragsdale on Friday and Saturday for the regional tournament, where the top four finishers from each weight class will move on to the NCHSAA 4-A state championships next week at the Greensboro Coliseum.

The West Forsyth boys swim team finished 11th in the NCHSAA 4-A state championship last weekend at the Triangle Aquatic Center in Cary.

Luke Vlahos broke two school records in his individual events — one in the 200 freestyle, where he finished 10th, and one in the 100 butterfly, where he finished eighth — to cap his career. He also swam a leg on the 200-freestyle relay team that finished seventh in 1 minute, 27.99 seconds. Vlahos was joined by Alex Valliere, Jake Freiberg and Connor Greene.

Greene also posted a top 10 finish for the Titans, placing eighth in the 50 freestyle in 21.63 seconds.

The boys and girls indoor track and field teams will head to JDL Fast Track in Winston-Salem on Saturday to take aim at the NCHSAA 4-A state championship meet.

Will Atkins (1000) and Mason Ellis (shot put) are defending state champions in their events. Atkins, who has signed with Duke, has been bothered by illness and injury for most of the season. Ellis, who broke the state shot put record two weeks ago, has rounded into form after a bout with pneumonia at the beginning of the season.

Last year, the girls team finished fifth at the state championships, while the boys finished fourth.

The boys and girls basketball teams will end their regular seasons on Friday night against Glenn.

The conference tournament will be held next week at Reagan.

The girls team, the reigning 4-A state champions, began the week 13-8 overall and 6-2 in the conference, with their only losses coming against Glenn and East Forsyth.

The boys team started the week 4-18 (3-5 in the conference) and has won three of their last four games and are in a three-way tie for third place in the league standings.