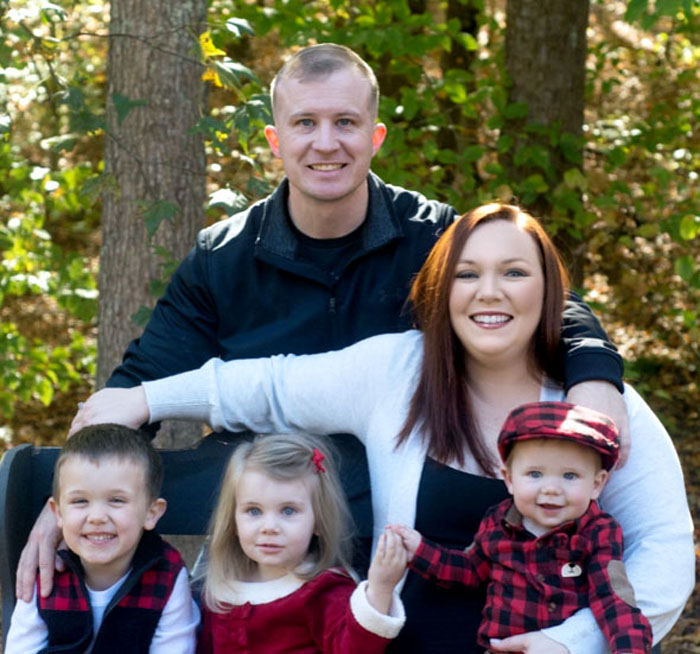 Campbell family — Chris and Nicole with, from left, Benjamin, Evelyn and Lincoln

Nicole Campbell has spent her life many places because of her family’s roots in the military. Born in Clemmons, she loved growing up in a tight-knit community. When Campbell was a fourth-grade student, her mother got re-married. Her stepfather was in the military and stationed at Fort Bragg. Campbell’s family would call Fort Bragg home for the next five years. “It was the first time I really understood what that lifestyle was really like. It was challenging at first, having to pick up and make new friends. But I grew to really like it,” reflects Campbell.

Campbell and her family moved back to Clemmons right when she started high school. Campbell attended West Forsyth High School where she enjoyed playing volleyball. “Once I graduated high school, I thought I wanted to be in the medical field, but I wasn’t quite sure what that would look like,” explains Campbell. She received an associate’s degree in general education from Forsyth Technical Community College. “I still wasn’t sure what I wanted to do, so I moved back to Fayetteville briefly, because it was like a second home to me,” mentions Campbell.

Campbell’s stay in Fayetteville made her miss being near her family, so she headed back to Clemmons. Having finished training while in Fayetteville to become a certified nursing assistant, Campbell started at Novant Health. “Not too long after, I joined Novant Health Gateway Family Medicine working as a medical assistant to an amazing physicians assistant who became a close friend,” notes Campbell. Unfortunately, while working in this position Campbell began to feel ill. “At first I had no idea what was causing the symptoms I was experiencing. I was a very active person, and now I was bed-ridden. I couldn’t even perform my job any longer, much less care for myself,” reveals Campbell.

For the next several months Campbell sought answers for what was causing her illness. “I really had to advocate for myself during that time. I was finally diagnosed with Lyme disease,” shares Campbell. She traveled extensively to get the help and care she needed. “I received treatment at the Mayo Clinic in Minneapolis, but felt the most improvement when I sought help from a natural integrative doctor in South Carolina. His outside-the-box approach with herbs and essential oils really helped substantially.”

Campbell who was diagnosed with chronic Lyme disease began the road to readjusting to normal life. “I had depended on my mother a lot. She was also caring for my sister too. I was ready to be independent again,” says Campbell. During that time, Nicole received a message from an old neighbor, Christopher Campbell. “Chris’ dad and my stepdad were working together,” explains Nicole. “Chris had joined the military when he was 17 years old, and he was coming to town, and wanted to get together. I didn’t think much about it, just two friends catching up. When he came to my house and I saw him for the first time I got butterflies because he had changed completely from the middle school version of himself that I had remembered. I thought he was so handsome,” smiles Nicole.

The two former friends hit it off instantly on their date of a professional basketball game in Charlotte and then to the Tanglewood Festival of Lights. “The next night we went to dinner again. When he was talking about his future, I knew right then and there that I wanted to be a part of that,” recalls Campbell. “I just knew.” The feeling was mutual because Chris proposed to Nicole just two weeks later when the ball dropped on New Years Eve.

The newly engaged couple experienced their first separation because Chris had committed to a deployment to Germany. “That was tough. While he was there I planned our wedding, and we communicated as best we could,” recalls Campbell. The two were married in November 2014 at Holy Family Church in Clemmons. “Three days after we got married, I moved to Germany to be with him for the next year,” remembers Campbell. During that time, the Campbells had their first baby, Benjamin (4). “It was scary because I had to have him in a German hospital and I did not speak the language. The base we were at was very small, so that was our only option,” remembers Campbell.  The family moved back to the states four months later. “Chris started training at Fort Rucker in Alabama to become a warrant office, and I stayed with my mom in Clemmons while he did his training,” says Campbell.

The Campbells had several moves to bases in both Georgia and Kentucky when they found they were pregnant with their second child, Evelyn (3) in December of 2016. “You worry that you can’t possibly love a child as much again, but you realize once you hold them you just make room in your heart,” reflects Campbell. “She melted my heart all over again.” Once again, the Campbells got news of another deployment just four months after their new arrival. This time, Chris’ deployment would be to the Middle East. “This one was really tough. He wasn’t just separated from me, but it was his family that we had created together as well,” explains Campbell. Once again, Nicole turned to her family during the deployment, “I took classes at the Aveda Institute in Charlotte to become a cosmetologist.”

The mom of two young toddlers finished her schooling and reconnected with her husband when he returned to Fort Knox in Kentucky. During that time they welcomed their third child, Lincoln, in March 2019. They also were faced with making another move. The Campbells were hoping for a stay in Germany, however, the outcome ended up being in Korea for just Chris. The rest of the family would have to stay behind. “It definitely threw a wrench in our plans. I was angry and upset because it was not what we had hoped for or expected. I hate having my family torn apart,” laments Campbell. “The hardest part about Chris being gone is being the mom and the dad. Or when the kids are having a hard day because they miss their daddy, especially my oldest.” Campbell still tries to make the best of it by utilizing technology. “With a 14-hour time difference, we’re usually going to bed when he’s waking up. But we do try and talk every day. It’s a challenge. Nothing beats having the person right in front of you.”

The Campbells are currently counting down the days to Chris’ return to his family. He is slated to return this year on veteran’s day, one year exactly from the date he left. “My mom, dad, stepdad, and family are a huge support system to me. Also, other veterans’ families too. Fellow military spouses I have kept in contact with understand the frustrations and emotions that are associated with these separations. It’s helpful to reach out to them,” says Campbell. “I am grateful to be in Clemmons where my kids get to know and have a relationship with their grandparents.” Campbell is also exploring career opportunities utilizing her cosmetology license. “I’ve just got to find the right place where they would be flexible with my wanting to follow my passion and still be a mom,” emphasizes Campbell.

While Campbell works to find what that balance looks like, she is still willing to help others going through similar deployment situations. “I always want to be there for someone going through this. I would want anyone reading this article who wants support to know I’d be there for them if they needed me,” offers Campbell.