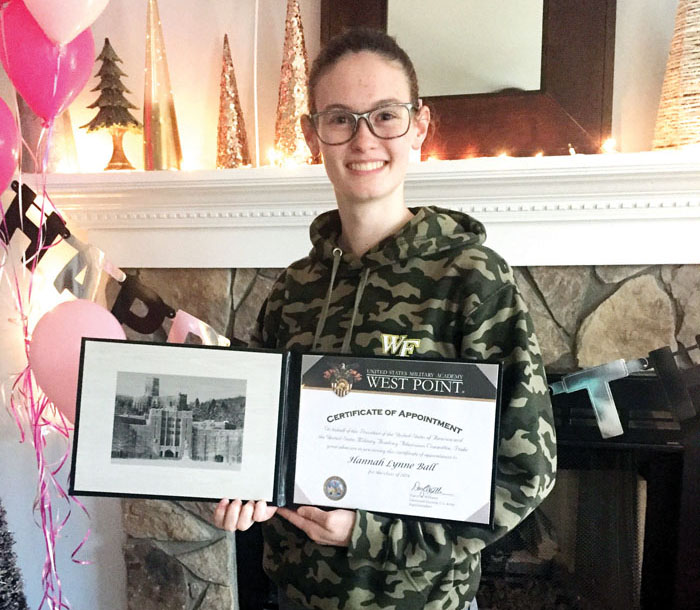 Hannah Ball has been accepted to West Point Military Academy 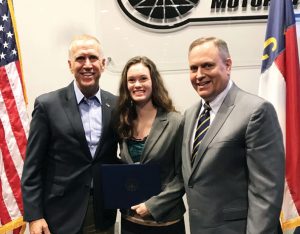 For Hannah Ball, a senior at West Forsyth, a dream came true on Feb. 11 when she received the news that she has been accepted to the United States Military Academy at West Point. “I was checking my phone all day,” she said knowing that was the day that she would be notified if she would be accepted to the prestigious military academy. “I found out when I was in calculus class, and I wanted to yell, but I knew that I couldn’t at the time,” she said.

The application process for Hannah to gain acceptance to West Point involved a year and a half of paperwork, medical clearances, a series of interviews, video submissions of physical fitness tests and a recommendation from a U.S. Congressman, all the while continuing to manage her academics and JROTC responsibilities. Senator Thom Tillis was the congressman who nominated her.

Reflecting on the application process for West Point as a test of an applicant’s diligence, her mother Kim Ball noted, “They are testing to see if an applicant is serious and willing to put in the work that is required.” Only 10% of applicants who represent some of the most highly qualified high school students are accepted to West Point so Hannah’s acceptance is a tremendous accomplishment.

Hannah’s father, Rob Ball commented, “Hannah is naturally driven, and having the goal of getting into West Point fostered her drive. This goal has given her something to focus on.”

“I do everything with a purpose in mind,” Hannah said, agreeing with her father. She noted that her rigorous academic schedule that has included taking 13 advanced placement classes and being a member of the Junior ROTC program in high school have prepared her for the demands that she will face at West Point. “Combining the academic rigor of my classes with the physical demands of Junior ROTC have prepared me well,” she said.

Her first major test of the demands of becoming a West Point cadet will happen this summer when she will spend three months in the woods engaging in strenuous physical activities and combat simulations. The experience known as “Beast Barracks” is the grueling West Point version of army basic training.

Hannah’s acceptance to West Point extends a family legacy. Her paternal grandfather Robert Ball, a retired Army colonel, graduated from there in 1977, and the two of them have a close relationship. “We share a bond with calculus and West Point,” Hannah noted. Her grandfather returned to his alma mater as a U.S. Army captain in the 1980s to teach calculus for three years, and math has always been one of Hannah’s favorite subjects. It must seem like karma that she learned of her acceptance to West Point while sitting in her calculus class a few weeks ago.

On the day that she received her acceptance letter, she also received a letter from her grandfather that read in part, “Let me be the first to welcome you into the Long Gray Line,” referring to her prestigious future as a West Point cadet.

While thrilled with her daughter’s acceptance to West Point, Kim noted that she had expected Hannah to gain admission to the military academy. “I honestly wasn’t surprised that she was admitted,” her mother said, “but at the same time there was a deer in the headlights feeling to hearing the news. It’s still sinking in.”

Rob indicated that although he should probably feel nervous about the demands and challenges that Hannah will face this summer and as a future cadet that he is not feeling anxious about her future. “A lot of people have asked me if I am nervous,” he said, “but I am just excited because I know what she is capable of doing. The most rigorous training will make her the most prepared.”

“I am super proud of her,” Kim said of her daughter, “and I am excited for her and for the caliber of people that she will be around.”

Hannah is considering a major in defense strategic studies as she pursues her undergraduate degree at West Point. The major is a well-rounded bachelor of science degree program that includes classes in economics, politics, religion and foreign policy.

She is committed to six years of active duty and two years of reserve duty after she graduates. Although she has a long time to determine whether or not to make the military a lifelong career, it is something that she is considering. Regardless of her decision, Hannah certainly has a tremendous future ahead of her, and she is a source of great pride for her family and our community.