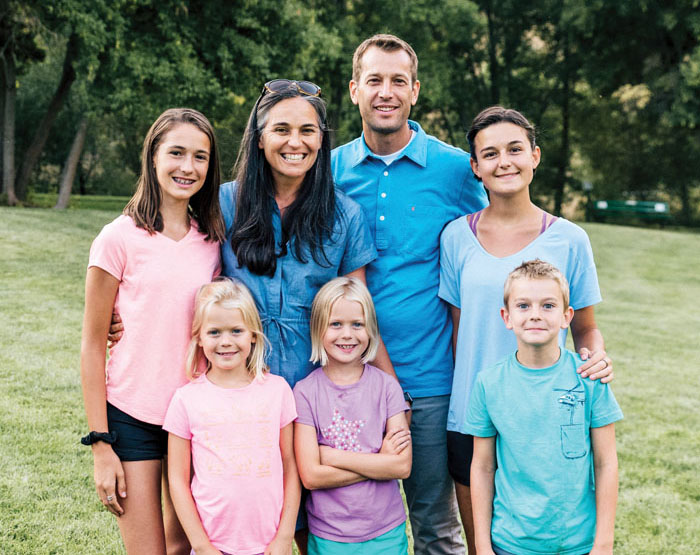 Duane Henderson spent his early years growing up in sunny Southern California. “I loved being outside, and riding my skateboard,” remembers Henderson. It was the beginning of Henderson’s appreciation for being active in nature. “We moved to Utah in the late ’80s because my grandfather had Alzheimer’s. My dad, who was a colonel in the Air Force, retired early and moved our family to help care for him.”

Henderson’s move to Utah was an eye opener at first. “Back then there was quite a big difference. All the kids had on cowboy boots and I was riding my skateboard,” jokes Henderson. “It’s not quite like that now, but that’s how it was when we moved.” During his childhood, Henderson never played organized sports, however, he embraced cycling, mountain biking, and skiing in addition to skateboarding. “Having started kindergarten early, I was only 4, I was always the youngest so I was smaller, and organized sports would have been more of a challenge with my height,” reflects Henderson. “I was 16 years old when I was a senior in high school.”

The young high school graduate went to community college for a few semesters. Henderson’s plan was to ultimately attend Brigham Young University (BYU) like the rest of his siblings. Getting straight A’s at the local community college guaranteed his opportunity to do so. However, Henderson would first take his mission trip supporting his Mormon faith for two years in Minnesota.

After Henderson completed his two-year mission trip, he came back ready to start his academic career at BYU. “I had originally planned to be a dentist. I got to my junior year, and organic chemistry was just plain tough. A friend of mine had mentioned a construction management program to me. I had never even heard of the program,” recalls Henderson. “So I went and talked to a school counselor about the program. My counselor tried to scare me about the difficulty of the program, especially because of the calculus. Luckily, I had already taken that course and had gotten an A in it. I told my counselor as long as the program didn’t have organic chemistry, I should be good to go.”

The new career direction excited Henderson, he just had one more person to clear it with, his new wife, Kim. “We had met in high school and had gotten married during college. I was nervous to tell her that I was no longer going to be a dentist, but she took the news pretty well,” laughs Henderson. Having spent his college years working in construction to pay for his college education, he had both academic and hands on experience to prepare him for his next step.

“I was lucky,” explains Henderson. “BYU introduced students to a building company in the Southeast that loved hiring students from our school. They paid for our moving expenses, a salary for the summer, and tried to entice us to stay permanently. Kim and I came down to North Carolina, and loved it.” Needless to say, Henderson loved North Carolina so much; he came back and finished his last few credit hours at BYU with a bachelors of science degree in construction management, and moved back to N.C. permanently upon graduation.

The young family embraced North Carolina and the new opportunity in January 2004. “I was working for America’s Home Place, which is the company I had worked for the summer before graduation. They focused on building starter homes. My mentor, David taught me so much. I worked for them for about 14 months, but I equate that time to dog years, it was one of those learning opportunities that were fortuitous. It really helped make my career.”

Henderson’s innate ability to learn quickly, understand the customer’s vision, and craftsmanship found him in a new company where he could expand his talents. “I began working for Isenhour Homes. I was introduced to a higher-end product,” notes Henderson. Henderson’s former boss, from his first job even joined the team. However, like many builders, the recession was settling in and the company had to downsize. Henderson was faced with what that would mean to him after six years in the company.

In October of 2010, on the evening Henderson was laid off, he got a call from a friend who he enjoyed cycling with regularly. “He had previously asked for advice on how to build his home. I had connected him to everyone he needed to know. I did it as a friend, I didn’t ask for compensation. However, the bank wouldn’t lend him money to build it without having a builder running the project. He asked me if I would build his home. And right then there and I started my new company,” explains Henderson. “I believe this was the second fortuitous moment in my career.”

With the beginning of Henderson Custom Homes underway, Duane quickly had new clients excited about his next adventure. Within a few weeks after the inception of his new company, more customers called from his church asking to build their home. “It meant a lot to me. I was building a home for a friend that needed a home that could facilitate his advanced stages of Parkinson disease. It would be the home he lived in for the net 10 years of his life. I even spoke at his funeral,” reflects Henderson.

Henderson appreciates the personal relationship that comes with the territory of building people’s homes. “Typically, I’m building families’ dream homes. Many times they believe it’s the home they will spend the rest of their lives in. I like to make sure it’s exactly what they want and need,” emphasizes Henderson. Henderson’s quality work has not gone unnoticed. The recipient of Golden Home Award in the Winston-Salem Parade of Homes for 2006, 2008 and 2009, Henderson is always looking to exceed customer’s expectations with each project.

The talented father of five still manages to make time for his top project, his family. “My wife, Kim and I have five children. Their ages range from 7-17 years old. We are truly blessed,” notes the proud dad. The Henderson family shares the same love for being active and outside. “On the weekends we like to take off camping, skiing, mountain biking, and cycling,” explains Henderson. “We really like taking adventures together.”

The Henderson family also likes coming together to give back to their community. They are very active in their church, and serve on a council that manages the 11 congregations in our local area. “We also have enjoyed adopting families through World Relief. It allows us to help families in need who are trying to assimilate to our area,” notes Henderson.

The Henderson family of seven who enjoys helping others, spending time together, and taking new adventures will be embarking on another new chapter next year. Kim and Duane’s oldest daughter will be headed to BYU, on a full-ride academic scholarship. The opportunity is very exciting for Jane, and the rest of the Henderson family who will have another good reason to head west to plan their next adventure.