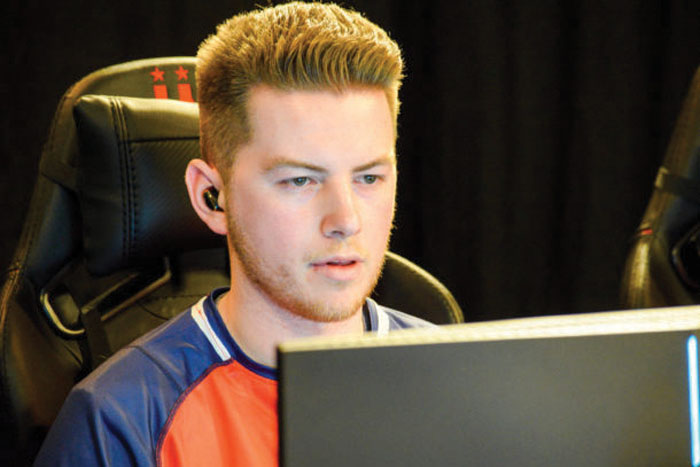 Josh Claus concentrates while maneuvering virtual player JClaus during a game in the finals. 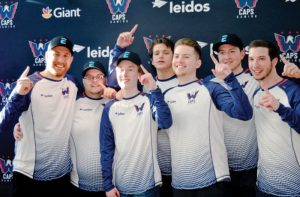 Josh Claus (third from right) first met his online teammates in person at the championship in Washington, D.C.

By Betsy Ramsbotham
For the Clemmons Courier

When Josh Claus, of Clemmons, was five and learning how to ice skate in New York state, he never imagined that at age 23 he would win an ice hockey championship.

Or that he would win it without ever putting on a pair of skates.

Claus and his Entourage teammates won the Caps Gaming Championship on Feb. 29 in Washington, D.C. The event was held at the Capital One Arena.

Claus and his teammates, who are from all over the United States, met online over a couple of years while playing NHL simulation video games on X-Box One. They decided to establish a team and compete for the $10,000 championship prize.

Last December, 84 teams started on a journey that ended with Entourage defeating the No. 1 seed in a sweep of three games to none in the best of five.

The top four teams were flown to Washington, D.C. with expenses paid for the final games. It was there that the Entourage teammates met face-to-face for the first time.

“Meeting them was like seeing an old friend for the first time in a while and picking up where we left off. They are all great guys and having them as friends is an added bonus to our win,” said Claus.

Each player created an image to represent his virtual hockey player. Claus’ virtual center is 6’2” like himself and his name is JClaus.

Other people sometimes give their players wild-colored hair and features different from their own, but Claus feels that having an avatar like himself helps give him a mental edge.

Claus said that virtual competition resembles real competition in lots of ways and that it can be mentally exhausting. “We are still taking in what happened in Washington,” he said.

Sports have always been an important aspect in Claus’ life. He played baseball at West Forsyth High School and Bishop McGuiness High School.

He has attended the University of South Carolina and is currently attending Forsyth Technical Community College.

His current athletic focus is on NHL competitive gaming, and he is preparing for two upcoming tournaments.

“Combining something I love doing with the potential to make money at it is a good thing,” he said.