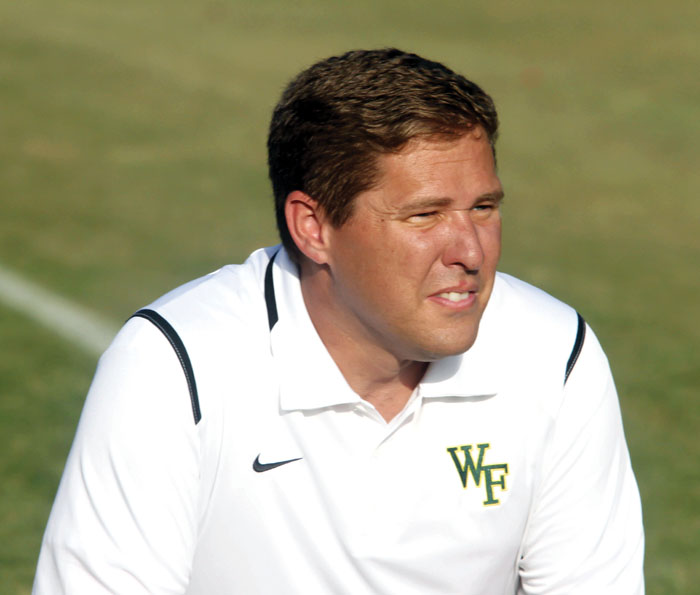 You can’t argue about the success that the West Forsyth girls soccer program has had over the last several years, which includes an NCHSAA 4-A state championship in 2017.

And after graduating 12 seniors from last year’s team — many of whom were four-year varsity players that formed the nucleus of a program that won 86 games in four seasons — you might think the Titans would have some level of drop off.

Coach Scott Bilton welcomes the challenge of molding a team with 11 new faces — some of which were on the JV team that finished 15-1 — and returns just three starters from last season’s team, which finished 23-1, their only blemish coming in a 2-1 loss to Pinecrest in the state semifinals.

“We’ve had a lot of turnover, not only in our numbers, but in the history of the players that were here before them,” Bilton said. “It’s a different challenge for us but also a very exciting one. It’s kind of like going back to school for me in that I’m having to re-teach things that in years past, I didn’t have to do because so many of those players had been with me for four years. It’s definitely a new page for us. Yes, we want to honor and respect what we’ve done in the past. We will continue to play hard because of the people who came before us. They’ve earned that.”

As is custom with Bilton’s teams, the Titans will build around their defense. West won two of its first three games this season (with one tie) while allowing just one goal thus far.

“We always tend to start from the back and work our way up,” Bilton said. “That’s been our hallmark here. First and foremost, we are a defensive-oriented team. Our top efforts will always focus on our defense. So far, we’ve been doing a good job of limiting our opponents’ shots. I’ve been encouraged by what I’ve seen so far.”

Several players that Bilton will rely on as the season progresses have varsity experience.

Seniors Cami Belin and Justiss Hunter, two of the team’s captains, are both defenders who will patrol the back line

Twin sisters Avery (midfield) and Victoria McGuirt (defense) will be counted on to provide leadership.

“Avery is a phenomenal player that we could play anywhere on the field,” Bilton said. “She can really control the ball for us, and her sister will play a key role on defense.”

Junior forward Megan Peters, another captain, is a natural leader.

“Megan has been with us since she was a freshman,” Bilton said. “She understands our expectations and we expect her to help control the field as a point forward. She has a tireless work ethic and that translates to the rest of the team.”

Junior Corinne Byrum will take over in goal after moving up from the junior varsity team last season.

“She has been doing a fine job for us so far,” Bilton said. “We’ve been really blessed with quality goalkeepers at West and she fits right in with them. She is a collegiate-level keeper just like her sister, who played here for us several years ago and is playing in college now.”

Because of all the new faces, Bilton said that he has taken great care to effectively communicate about goals, roles, and responsibilities.

“We’ve had plenty of meetings just so we can come together and talk about our goals and make sure we are speaking the same language and that they understand what we want, when we want it,” Bilton said. “There might be a certain word I focus on that I really want them to understand, and sometimes that means we go over things slowly. I know that it will be a learning process for some of them, which is why I’m really trying to reiterate with each player about my expectations. That includes me talking to them and saying, ‘this is where I see you at this point, this is your role’ so I can provide them with as much clarity as possible.”

Bilton knows that the Central Piedmont 4-A Conference will be as tough as always. West blitzed through league play last season with a perfect 10-0 record.

“I don’t think anyone will run away with it this year,” he said. “It’s going to be super competitive. East Forsyth, Reagan, Reynolds—those are all really good teams. And we’re in the mix there too. We hope to have a say in the final result.”