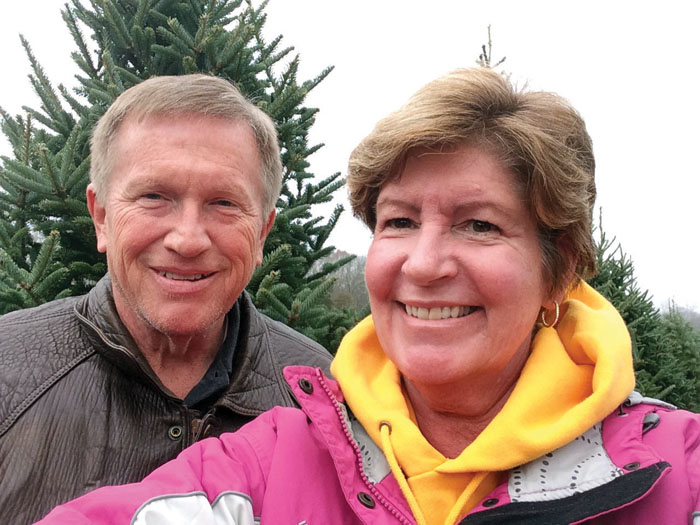 Diane and her husband Rick Potter.

Diane Potter spent many of her younger years in new places because of her father’s career in the United States Air Force. Born in Alaska, Potter called places like Staten Island, New York and New Jersey home. Her love for trying new things was instilled early in life, including traveling to Europe through academic programs in school. Her college adventure took her to Virginia Polytechnic Institute and State University. “I had decided on that school because my cousin was there,” mentions Potter.

After her graduation, Potter decided to head back to New Jersey to begin working at Ingersoll Rand, Inc. in human resources. “I spent about 10 years working for the company,” recalls Potter. It would serve to be fortuitous in her personal life as well, because she would meet her future husband, Rick, while working for them.

The couple decided to make their next home in Kansas City due to Rick’s job. Diane continued her career in employee relations as a manager. “It was during that time my husband’s children would come stay with us during the summer months, I decided I wanted to do something different,” mentions Potter. “I remember my mom was really active in volunteerism when I was younger. I wanted to give back to my community too.”  Potter began serving at the Kansas City Young Matrons organization, which encouraged volunteerism with various civic and charitable organizations within the area.

Potter was both inspired and energized with her involvement with the Kansas City Young Matrons. When she and Rick moved to Clemmons based on the urging of some friends for a new job, Diane didn’t skip a beat with her charity work. Potter and several of her friends wrote and sold a cookbook that helped raise $10,000, which they donated to the Clemmons Food Pantry. “It had crock pot ideas, appetizers, main dishes, and other celebrity favorites and features. We were really excited to see the success and impact it made,” shares Potter.

Potter didn’t stop there with her involvement helping feed those in the Clemmons community. She became immersed in the Meals-on-Wheels program as the volunteer coordinator. “We offer healthy food choices to seniors in the Clemmons community whether it’s a hot or frozen meal, and groceries. Often times these seniors don’t have family in the area to help them. They are very grateful for the assistance and friendship the program provides,” explains Potter. Potter spends at least five days a month delivering meals to fellow seniors. “On an average day when you volunteer, you will visit anywhere between 18-20 different people. You usually visit the same ones each time unless they have fallen ill,” states Potter. “Some days I will take them to their doctor appointments too.”

The busy kind Samaritan has also inspired her husband in several other capacities. Diane has given her time volunteering at the Ronald McDonald House, helping provide a respite for families who have extended stays at the hospital. While simultaneously serving in the patient and family relations program at the Wake Forest Baptist Medical Center, Diane helps incoming patients feel at ease with answering any questions or concerns. “I convinced my husband to start helping with me. He did, and decided he enjoyed helping people at the hospital so much; he even went back to school to become a nurse. He now works a couple of days a week on the late shift in the emergency room,” mentions Potter.

Rick and Diane have found other niches in the community. “We love going to football and hockey games. We also enjoy NASCAR. We’re big fans of the Winston-Salem Theater Alliance,” mentions Potter. Potter embraces her community friends whether she’s going to book club, attending Holy Family Church, or volunteering at her many charitable organizations. “The Clemmons community really has a lot to offer,” says the grateful Potter.

Our neighbor has chosen to lead by example with her many acts of kindness in volunteerism. As Jane Goodall once astutely noted about making a difference, “What you do makes a difference, and you have to decide what kind of difference you want to make.”