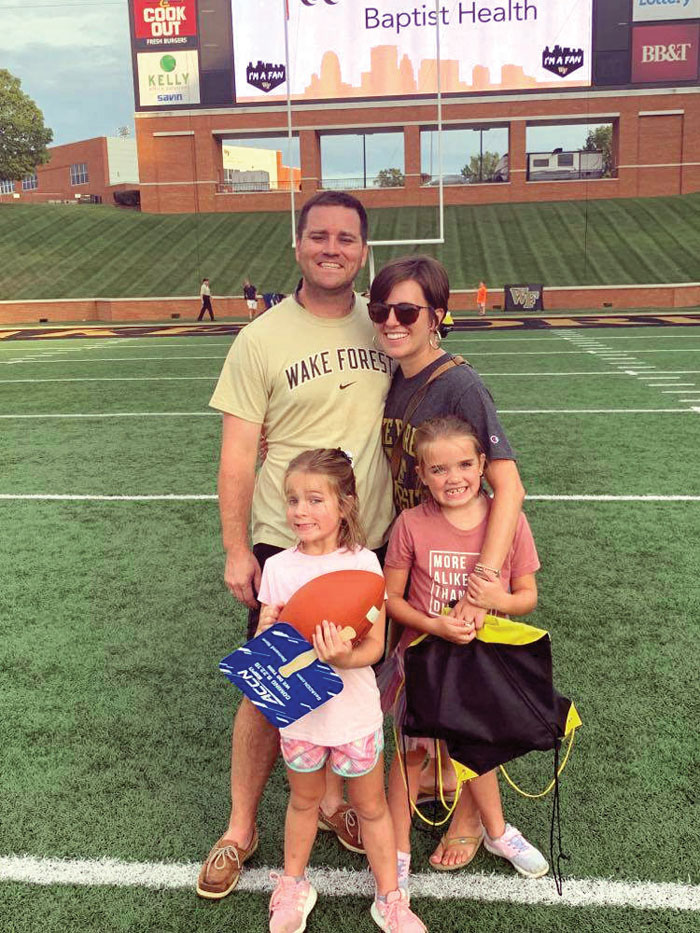 Michael Combs grew up in Hickory as the younger of two children. From an early age, he took to sports like basketball, golf and soccer. He enjoyed soccer so much that he decided to take it to the next level. Combs headed to Montreat College right outside of Asheville. “They offered me the most money, so I went there to play as a defensive midfielder,” notes Combs.

Combs enjoyed his time at Montreat College. Even when he suffered an anterior cruciate ligament (ACL) injury his sophomore year, he bounced back in time for his junior year. “My ACL injury wasn’t career-ending, luckily,” reflects Combs. “I was able to play in every game the following year. It was probably the best and worst thing to happen to me because at that time I was considering going to a Division I school. Because of my injury, that didn’t happen. I didn’t know at that time the unique opportunity I was going to be acquiring my senior year.”

Another life-changing event during Michael’s sophomore year was meeting his future wife, Casey. “I had known Casey from our hometown of Hickory. She had moved when we were pretty young, so we didn’t know each other, but she lived only eight houses from me before they left town,” notes Combs. “I was dared $1 by my best friend to knock on her door when we saw her running through the neighborhood.” Luckily for Combs, Casey answered the door and they began talking and staying in touch. “Casey was at the University of North Carolina at Chapel Hill which was three hours away. We made it work. When you know something’s meant to be, you just know,” explains Combs.

With his personal life blooming, Combs was asked to step up the spring semester of his senior year as a coach. “One of my college coaches was offered an opportunity to play professionally in Germany, and so I was offered his position by the athletic director. I was really excited to take it,” notes Combs. “We were ranked in the country at that time.”

With Combs’ impending graduation, he knew his relationship with Casey was going to be getting even more serious. “I knew I needed to make money,” says Combs. He had received his bachelors of arts in business administration with a concentration in accounting. “I reached back out to the company that I had done an internship with during my summer, Hanes Geo Components,” explains Combs. This move proved to be the right one for Combs. Now the vice president for the company, he gets to travel the world and see many new places and things. “The one thing I really enjoy about travel is meeting new people and learning about their cultures. I always feel so welcomed and humbled by how gracious and inviting they are,” says Combs.

Combs’ travels give him the opportunity to see and try new things, and appreciate what he comes home to. He and his wife, Casey, have two young daughters, Pippa and Parker. “She’s an amazing mom. When I was working full time and went back to graduate school at Wake Forest University to get my master’s of business administration degree, she took care of the family,” appreciates Combs.

Michael and Casey appreciate the quieter days on the weekends when they can catch up, coach their daughters’ soccer teams, and spend quality time as a family. “I love being a girls’ dad,” reflects Combs. “They have so much personality and energy. They teach me so much, and make me so proud.”

Our neighbor reminds us to enjoy the journey of life, and what each lesson teaches us. As Dwight D. Eisenhower remarked, “Accomplishments will prove to be a journey, not a destination.”