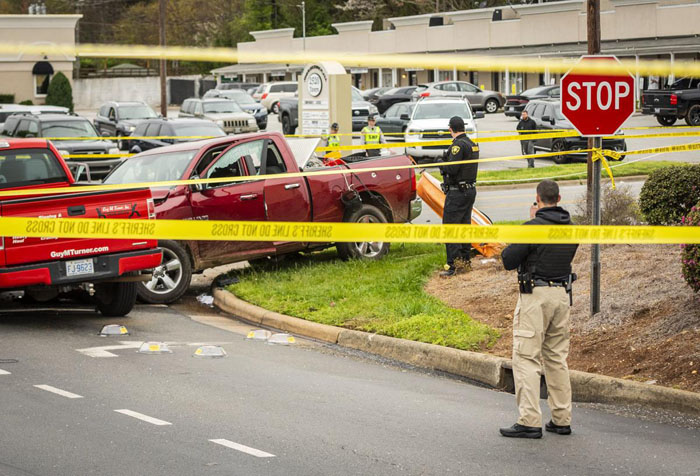 Deputies with the Forsyth County Sheriff's Office at the scene of a deputy involved shooting Tuesday in Clemmons. Photo by Andrew Dye/ Winston-Salem Journal

A man was shot by Forsyth County Sheriff’s Office deputies on Tuesday afternoon after a police chase that ended in the 2500 block of Lewisville-Clemmons Road in Clemmons.

The suspect has been identified as Christopher Joel Mock, a 45-year-old white male of Winston-Salem. About 1:50 p.m., deputies on routine patrol identified a vehicle matching the description of a vehicle associated with a person of interest in a missing person case. Authorities later discovered the body of Toni Renee Handy at the home they shared.

Deputies attempted to stop the vehicle. The driver refused to stop and a vehicle pursuit ensued. Four civilian vehicles were damaged during the pursuit. One person was injured and transported to the hospital.

Ultimately, the pursuit ended with a deputy-involved-shooting. Mock was taken by ambulance to Wake Forest Baptist hospital. Medical personnel declared Mock dead in the ambulance, then were able to revive him at the hospital, according to Forsyth County Sheriff Bobby Kimbrough.

A firearm was recovered at the scene at the incident. No deputies were injured. The State Bureau of Investigation will investigate this incident.

The deputies involved in this shooting has been placed on administrative leave, according to standard procedure.