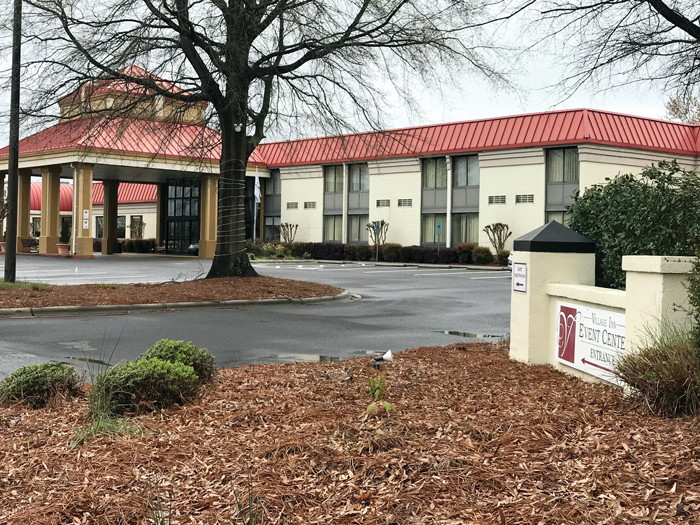 Village Inn Hotel & Event Center has lots of rooms available these days but most of the recent cancellations have rescheduled for later in the year or 2021. Photo by Jim Buice 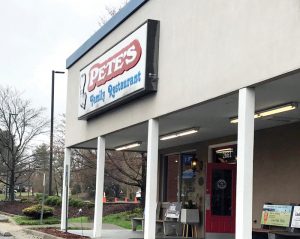 There are many open parking spaces these days at Pete’s Family Restaurant after the recent mandate that restaurants were ordered to be closed to dine-in patrons and could only do takeout. Photo by Jim Buice

In the days of coronavirus and social distancing, there’s plenty of uncertainty about what’s ahead.

Mayor John Wait said he, like everyone else, is still trying to figure things out but knows that businesses in Clemmons “are getting hit pretty hard. That’s the general impression I’m hearing for those I’ve spoken with. I think other than the grocery stores, pretty much all of our local businesses will probably be very significantly impacted.

Village Manager Scott Buffkin said that the economic impact has been pretty obvious.

“Our restaurants and other facilities that haven’t been able to open their doors and what that’s doing to their hourly workers and others is concerning,” he said. “As far as the local government for us, we’ve gone to a skeleton crew in the office with the others being told to work from home. Public Works is trying to stay on schedule doing the things we do as long as we can.

“Beyond that, we’re just playing it day by day and see how things change and doing the best we can with what we have to work with at the time. We just have to hold tight. This could be weeks or months.”

Things seem to change daily in confronting COVID-19, an infectious disease caused by the new coronavirus, with the latest development being the announcement coming from Raleigh on Monday that public schools will now be closed until at least May 15. The executive order also included a reduction of mass gatherings to no more than 50 people.

However, N.C. Gov. Roy Cooper did not issue a shelter-in-place mandate on Monday that other states have enacted, although there’s plenty of speculation that it could be coming any day based on rising numbers of those testing positive for coronavirus as more testing is done.

One local restaurant owner, George Petropoulos of Pete’s Family Restaurant — which has been a fixture on Lewisville-Clemmons Road for more than 40 years — said that it has been a difficult transition since restaurants were ordered to be closed to dine-in patrons last Tuesday and could only do takeout or delivery.

“We went from being a wide-open business, to still having some takeout orders,” he said. “We had a good takeout business before this, but not being able to have dining in the restaurant, it meant I had to cut hours by 70 percent. I did not let my employees go, but I am trying to rotate my full-time employees to keep things going.”

Petropoulos said he has more than 30 employees, including 15 to 20 who are full time, and added that takeout accounted for 25 percent of his business before the dining room was shut down last week. He is currently doing breakfast just from 7 a.m. to 8 a.m., and then lunch and dinner.

“Mostly at night is when people do takeout,” he said. “Takeout is what kind of keeps the door open right now.”

Petropoulos worries about his employees and his business with the current environment.

“People have bills to pay,” he said. “They might be able to make it for two weeks, max three weeks, but after that, that’s when the problems start. Once we open, everybody will come back and have their job back. Nobody has been fired here. They can draw unemployment if they can get through the system.

“For the business, we have rent, utilities, food we’ve already bought, insurance, everything. So it’s a domino effect. Everybody gets impacted. Everyone is kind of confused. How long it’s going to last is the biggest thing.”

However, Petropoulos wanted to add that he was thankful for the loyal customers leaving good tips, which is a big help for the waitresses and cash register people.

“We’ve heard people say they want to support local businesses, and they are doing it,” he said.

Lana Schlotfeldt, the general manager of Village Inn Hotel & Event Center, which is located on Ramada Drive just off Lewisville-Clemmons Road near I-40, said that although she received cancellations on “everything I pretty much had on the books through the end of April, thank goodness probably 90 percent of the March and April bookings have rescheduled for later in the year or 2021.”

Schlotfeldt said that the inn has averaged having only two to four rooms occupied a night in the 141-room hotel since the governor’s first executive order of restricting gatherings to no more than 100 people.

“Our average occupancy rate is at least 50 percent,” she said. “March and April are usually very busy for us. We had a lot of bookings. We had furniture market, which also rescheduled.”

Unfortunately, Schlotfeldt said she had to lay off 85 percent of her staff because there’s no work. The front desk staff remains along with an executive housekeeper and maintenance man, who both work two to three hours a day.

“No one is coming in to stay overnight, and there are definitely no events,” Schlotfeldt said. “But we still need to keep things clean and maintained. We have to keep it going.”

The inn serves a lot of state associations, corporate groups, medical groups and social events, and Schlotfeldt said that four weddings have been rescheduled for later in the year.

“The main question I get is, ‘Are you still here?’ ” she said. “We will stay open until the government tells us to shut down.”

Buffkin said that he has talked to other managers around the state and learned that “a lot of the hotels and motels are closing their doors just knowing they don’t have the business to be able to justify. Again, it puts all those hourly folks who need that income certainly having an impact on those folks. It’s difficult to watch.”

Along those lines, Buffkin suggested remembering the servers.

“They’re really hurting,” he said. “Whoever brings the food out to you, give them a little something to help. Another recommendation I’ve heard folks say is if you have a local business that you like and want to support and help them, go buy a gift certificate. That’s a way to put some money in the owner’s pocket right now and you’re not actually taking back anyway from them.”

Wait said he has seen some positive signs as Clemmons adjusts to the new normal in these challenging economic times.

“The Clemmons Community Foundation is working on a couple of things to help charities that will be facilitating money for people in need,” the mayor said. “I’m hopeful that the federal and state government will be able to provide some resources. I’m also having some conversations to see if there’s anything we can do. We’re obviously probably pretty limited with the budget that we have. I can’t speak for the council, but I suspect they will help in whatever they believe is possible.”

And then there’s the human side as well.

“I have seen a lot of neighbors reaching out and making sure that people they know that are susceptible, whether they have a medical condition or in the older age bracket, are reaching out and seeing if they need assistance,” Wait said. “I encourage anyone who needs help can reach out to village hall. My email’s online, and the council members’ emails are online. Reach out to us. There shouldn’t be anybody who is so isolated that they can’t get supplies and those kinds of things. You’re not alone.

“I’m trying to wrap my own mind around this, especially when they canceled school, but it got really real when they canceled the Y. I mean, like, that’s where I blow off steam two days a week, whether it’s downtown (Winston-Salem) or here at Jerry Long. Emotionally I’m in the same boat as everyone else. But it’s encouraging to see how many people in the community are reaching out and supporting each other.”