Davie family takes schooling at home to next level 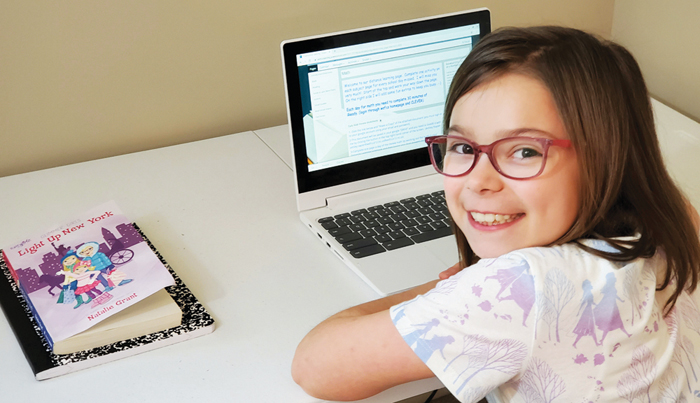 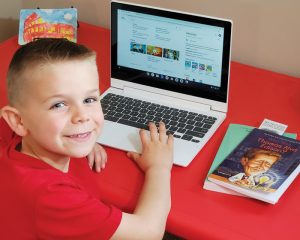 Joke of the day, delivered by Beau Davidson: Why are fish so smart? Because they live in schools.

Beau, 6, and his sister Josie, 9, are, like millions of other children, not in school these days. Normally, they’d commute from their Davie home to Clemmons Elementary, but now, their schooling is taking place at home. Even before the online curriculum was offered, their mom Erin Carter Davidson, was scouring their home and websites for tools she could use to keep her children learning.

“I was a cosmetology educator and a long-term substitute in Davie schools. I developed curriculum for the Aveda Institute, and I just really enjoy gathering curriculum,” she said.

Erin created a daily schedule for the children and turned their playroom into a classroom.

“We collected all the books we had around the house, placed two desks with a board above each desk with their daily schedule and behavior chart, just like they’d have at school. I hung up some of their artwork so it would look like a classroom.”

As of last week, she had enough curriculum items for three weeks, something she will use in addition to the online lessons the children have received from their teachers. The first few days were a bit of an experiment.

“We had a delayed start,” Erin said, with a laugh. “We got started around 9 a.m. but I think we will move that back now.”

Day one was pajama day and included reading, math, a Facebook broadcast time, science, art, PE, computer time that incorporates websites geared toward children while also helping them with their typing skills, and lunch.

The idea for broadcasting came from Parrot Talk, their school’s daily broadcast. The dining room and entry way of their house was turned into a studio, and every morning, their cheerful voices greet viewers with a bright “Good Morning.”

Josie writes the script and the pair give a few quick facts of the day, such as the date and weather, and then talk about other things. One day, Josie did a movie review of Frozen 2 and two days later, belted out some lines from the 1980 Dolly Parton song “9 to 5.” Another day, she reminded viewers about a YouTube video called Lunch Doodles with Mo Willens.

They also talk about other videos and live broadcasts children might enjoy, such as one on ocelots from the Cincinnati Zoo and one on alligators from the North Carolina Zoo.

The broadcast always concludes with a joke told by Beau. It’s available on Erin’s Facebook.

Erin said she knew the children would be out of school for at least two to three weeks but said she expected that to be extended, possibly even to eight weeks.

As a franchise consultant for Great Clips, she normally works from home one or two days a week and then travels the rest of the time but now that travel has stopped, she gets the children up and into their “school,” and then she heads to her home office.

She joked that when the salons closed, she would “integrate foiling into the school curriculum and teach Josie how to do it.”

Keeping students on task in a real classroom is difficult enough, and Erin said she knew it could be a challenge. She said she sat them down and told them they would all need to be team players to make this new reality work.

“Luckily, they both love school, but we know we just have to stick to the schedule right now to stay on task. I’m trying to keep them to the same hours they’d have at school.”

She also had a conversation with them about the virus and why it was important to stay home.

Some of the websites Erin Davidson used for curriculum content: www.dadsworksheets.com, www.teacher.scholastic.com, www.englishlinx.com and www.math-salamanders.com.

She also used a Facebook page called “So You’re Stuck at Home,” where parents can post resources they are using.