Shelter-in-place order in effect in Clemmons 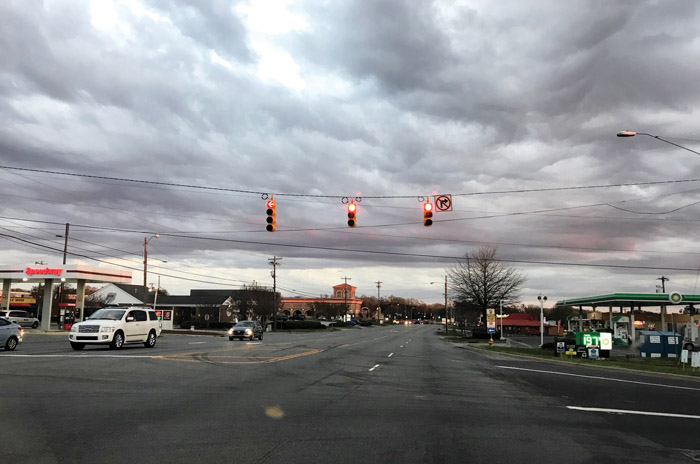 The always busy stretch on Lewisville-Clemmons Road is much quieter these days with all the implications involving coronavirus and more people staying home with the government restrictions. This photo, shot last Saturday, March 21, around 7 p.m. coming over the I-40 bridge with a red light, ominous clouds and little traffic, is certainly an image symbolizing the current shelter-in-place times. Photo by Jim Buice, for the Clemmons Courier.

For Clemmons Mayor John Wait, it wasn’t about being first and beating the much larger Winston-Salem or Forsyth County to the punch with a shelter-in-place order last week. It was more about the matter of the coronavirus not only hitting close to home, but actually hitting home.

So what prompted the mayor’s action to be out in front of the others?

“What prompted it was we had the confirmed case at Hayward (Industries),” he said of the local manufacturing plant. “I had no interest in picking on them. It was just a realization that the virus is actually here. I did a little digging, and they were likely an essential business no matter what. The goal of the order was never to shut them down. I heard some rumors about that, but I was like, no, it’s time for residents to stay home. That’s what needs to happen.”

Wait, who announced his mandate early last Wednesday afternoon just before Winston-Salem followed with a similar order, expected there was a good chance that Gov. Roy Cooper would have invoked state stay-at-home guidelines in his press conference last Monday. So when he didn’t at that time, Wait said he couldn’t wait any longer.

“It was at that point, it was Hayward,” he said. “I was, like, enough. The other thing I knew was that every major metro was going to do this. I talked to Allen (Joines, the mayor of Winston-Salem) and had emailed all the mayors and said ‘here’s what I’m thinking about doing and gauging what you guys are also doing.’ Allen emailed me back and said, ‘Listen, I’m already working with every major metro.’ So I said, ‘Excellent, send me what you got as soon as you’ve got it. I’m going to go ahead and get to working on ours.’

“We obviously have a lot of cross-pollination with Winston-Salem — that and we are a popular destination off the interstate. There’s not a lot in the order to affect that, but what it did is to really make sure it put the focus back on our residents staying home so they would be insulated from some of these essential businesses that are still going on.”

Wait said he wanted to provide some leeway for local nonessential businesses to still conduct business, even with restrictions. When Forsyth County approached Clemmons, as it did with all the other municipalities about being part of the county’s order, Wait said he declined because he already knew it would be the same as Winston-Salem.

“So I knew they wouldn’t have the exemption for nonessential businesses, and I felt that was important to keep,” Wait said. “Some of the local businesses have taken some action to make sure they can still operate and still comply like two I know of, Clemmons Bicycle and Hip Chics, but they were businesses that had already implemented some things anyway.”

Winston-Salem imposed its stay-at-home order last Wednesday on the heels of the Clemmons announcement, while Forsyth County announced its declaration, effective on Friday, the same day Lewisville proclaimed its directive.

Cooper finally moved forward with his stay-at-home mandate for the state late Friday afternoon, effective on Monday at 5 p.m., ordering non-essential businesses to close. However, as of Monday, Clemmons plans to be able to keep its order intact going forward.

Wait, in addition to consulting extensively with local health officials from Novant Health along with other local leaders and staff, said that he also got feedback from members of the Clemmons Village Council on the order and that they weren’t universal in how they wanted to approach it.

“I think that’s fine,” Wait said. “Everybody has different opinions. There may be some discussions down the line just based on kind of how this went, so I don’t know if council will choose to do that. They got the draft as soon as I finished it, and they had opportunity to give input and stuff like that before it was signed.”

While Wait has the authority to take such action, the council could change it if they chose to do so.

“Absolutely, if they disagreed with what I did, they could call an emergency meeting and go ahead and undo it,” he said.

Village Manager Scott Buffkin said that the mayor “has the authority to restrict a lot more than he has right now. I don’t think anyone ever contemplated a situation like this. It was more written for tornadoes and natural disasters and things like that.”

Since the word got out about the latest mandate being issued, Buffkin said that the phone at village hall has been ringing off the hook with questions primarily relating to the specific situation of the caller.

Buffkin said that one of the primary goals in this initiative for Clemmons is “to try to limit the spread of this as much as we physically can at this point and try to keep all of our folks as safe as they can be.”

After the mayor’s shelter-in-place order officially went into effect in Clemmons at 5 p.m. Friday with the latest restrictions, Sgt. Brian Gieger, who head the Clemmons community policing division for the Forsyth County Sheriff’s Department, said things were quiet over the weekend.

“Everyone is pretty much doing what they’re supposed to be doing,” Gieger said.