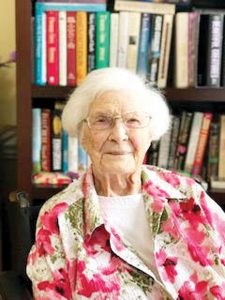 Pittard was born in Winston-Salem on March 29, 1916, to Calvin and Ethel Smith. She was the fourth of five children, Robert, Archie, Ruth, Margaret and Iva Lee. She was raised in Winston-Salem, and graduated from Reynolds High School in 1932 at age 16 and wrote an essay that won her a scholarship to High Point College.

Pittard’s father was a successful shoe salesman and worked at Hines Shoe Store and her mother was an excellent seamstress. She made most of their clothes and also made Pittard’s wedding dress. Her mother also taught her how to play the piano. While attending High Point College, she traveled with a friend to New York City by boat from Norfolk, Virginia. She also sang in the choir and met the love of her life, Rev. Jesse Leo Pittard. He also sang in the choir. Rev. Pittard was an Army veteran and served in World War II. Margaret and Rev. Pittard had three children, Jerrie Lynn, Michael Larry and Jesse Calvin.

Rev. Pittard attended Duke Divinity after college to be a minister. Margaret worked there some while he was in school. After they were married she became an administrative secretary to the president of UNC-Greensboro. She also was an administrative secretary to the Charlotte Jaycees and ran the Miss North Carolina Pageant for several years. Pittard was assistant to Harry Golden (publisher of Carolina Israelite) and at the same time served multiple churches as a Methodist minister’s wife and volunteered at Baptist Hospital.

Pittard has traveled to England, Israel, Alaska, and many other states. Her hobbies were church, work, family and Duke basketball. She has 10 grandchildren and 14 great-grandchildren. Pittard is a huge Duke fan in that Rev. Pittard graduated from there, as did her son Jess and granddaughter Michelle. She has a signed autographed picture of basketball coach Mike Krzyzewski hanging in her kitchen. Her main interests are Centenary United Methodist Church, her family and ACC basketball. She is a great source of inspiration to her family and always will be.