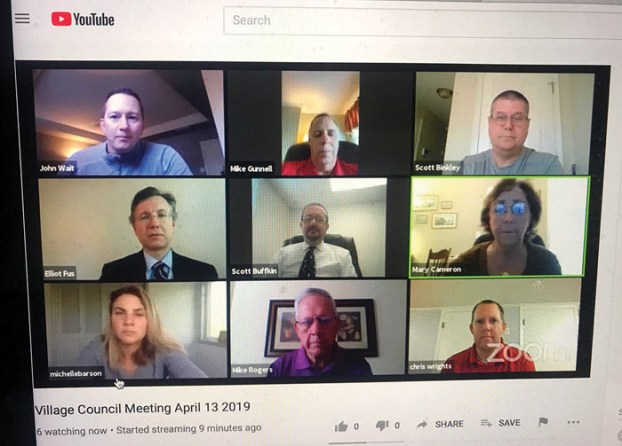 The Clemmons Village Council heard an update from John Wait on the current shelter-in-place order he implemented in late March along with revisiting an old ordinance regarding who can declare such a state of emergency and why in Monday night’s first-ever virtual meeting.

Due to the coronavirus pandemic and the restrictions on mass gatherings and social distancing, the council used Zoom for the meeting to be live streamed on the Clemmons YouTube page with the mayor, council members and staff members appearing in boxes on the screen.

Wait said that his order, which came out first in Forsyth County on March 23 ahead of Winston-Salem and later the county, would expire today (April 16) if it’s not extended, but that the governor’s state order would then serve as the default.

Wait said that the governor’s order, which is in place through April 29, is similar to that of Clemmons with the biggest difference being that it permits in-store traffic for non-essential businesses, with restrictions.

“Our local stores have no in-store traffic but do curbside and delivery much like restaurants are now doing,” said Wait, who didn’t mention any plans on extending the current order in Monday night’s meeting. “When the local order is more strict that the governor’s, then the local order actually applies. That’s what the governor’s order says to do.”

Wait said that he took action at the time after getting confirmation of a confirmed coronavirus case at Hayward Industries, a local manufacturing plant, and talking extensively with local health officials and other local leaders, along with getting feedback from the members of the council.

While Wait had the authority as mayor to take such action, he said that different opinions were offered and that the council could have called an emergency meeting if they chose to undo the order.

That didn’t happen, but councilwoman Mary Cameron did bring up what she called “a larger issue” regarding declaring a state of emergency, which was added to Monday night’s agenda.

“We have a policy on hand that spells out who can declare a state of emergency and why and all of that kind of thing,” she said. “When this policy was put in place, which I believe was shortly after we had our tornado, and I think that’s what we had in mind more than anything else — a tornado, a flood, something like that — that is a right-now situation where time was of the essence. I don’t think we ever envisioned anything like we are experiencing at the moment. I would suggest we take a look at that ordinance and see if we need to update it.”

Cameron said that she didn’t disagree at all with Wait’s actual stay-at-home order.

“I believe everything that he said, and it is working, and I’m all in favor of it — except for fact that it comes simply from the mayor,” Cameron said. “I think it should be coming from the governing body, which I think carries more weight — just as any decision we make is made as a body and then we turn it over to the mayor to represent us.”

Cameron asked if the manager and attorney could review the current policy and see if changes need to be made.

Councilwoman Michelle Barson concurred, saying, “I think it’s worth staff taking a look at it and see if it can use some updating.”

Wait said that when he signed the shelter-in-place order for Clemmons, there wasn’t enough information on if the local health-care providers had enough capacity to treat everyone who might get sick with the novel coronavirus.

Wait said he spoke on the phone with Dr. David Priest, an infectious disease specialist at Novant, on what could happen if Forsyth County didn’t do anything.

“He basically told me at that time if the shelter-in-place order was in effect that it looked like we would getting far enough ahead of things where we wouldn’t end up looking like New York and other places where the health-care system was simply overwhelmed and people were losing their lives because they couldn’t get the health care they needed,” Wait said. “He told me in no uncertain terms if we didn’t do it, we would end up that way.”

Wait added that last week Dr. Christopher Ohl, an infectious disease specialist at Wake Forest Baptist Health, was saying that what has been done in a coordinated effort in Forsyth has helped make sure that the local health-care system wasn’t inundated.

“Locally in Forsyth County, our numbers of new cases have been lower lately after a couple days with double-digit increases in cases,” Wait said. “There are still cases in Clemmons and Lewisville, not just in Winston-Salem or greater Forsyth County.”

Other than the one confirmed case at Hayward, Wait said there were no specifics provided from Novant officials, with only county totals being provided.

“Right now, the order in place is set to expire on Thursday,” Wait said. “Dr. Ohl recommends that everybody that has an order do it until at least May 15, if not until the end of the May. If it goes to at least May 15, the percentage of hospitals being overwhelmed is very low.”

In other highlights from Monday night’s virtual meeting, the council:

• Heard from Nasser Rahimzadeh, the planning and community development director, that the next Planning Board meeting will be held Tuesday, April 21, which will include a public hearing. Included will be the Idolwood subdivision for about 30 single-family units and the multi-family 78 units for one, two and three bedroom apartments located off U.S. 158.

• Approved Jewell Engineering developing construction plans for culvert replacements at Greenbrook Drive and Mendelsshon Drive. The company estimates a budget of $45,000 that cannot be exceeded without village approval.

• Approved a bid of $232,869, which includes a 20 percent contingency, for RCJ Contracting of East Bend to do the SpringPath Trail drainage improvement project.

• Heard from Shannon Ford in the marketing/communications report that all public events in Clemmons have been canceled or postponed through the end of April. She added that Forsyth Creek Week is going on this week on a virtual basis. Also, the Farmers Market is still scheduled to open on May 8, but she said that it may not be at the new location at the Jerry Long YMCA at the beginning and that a drive-thru service is being considered to keep everyone safe with proper social distancing.

• Discussed possible dates and times for the budget workshop, remote participation policy, and consideration of extending hours at Public Works on a Saturday or one night during the week — where it was agreed upon that a survey will be sent out to receive public input.

On Tuesday, the WS/FCS Board of Education waived any additional local graduation requirements by voting to follow guidance issued by... read more