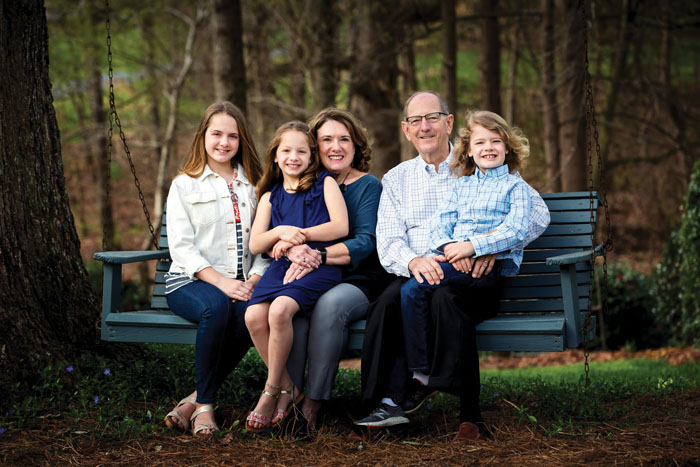 Dr. Bruce Shepherd and his wife, Pauline, will soon be celebrating 50 years of marriage. Here, they are seen with their grandchildren. Photograph by DesiLu Photography.

Dr. Bruce Shepherd grew up on a farm in Lansing, North Carolina, where he spent his childhood combing the woods of the Appalachia. As the youngest of three children, Dr. Shepherd enjoyed hunting and fishing. “Living in the mountains, you could spend your whole day without ever passing a public road,” reflects Shepherd.

When time came for Shepherd to figure out where to attend college, he assumed he would go to the University of North Carolina at Chapel Hill, especially after he had already been accepted there. However, the temptation to play basketball for Appalachian State University where he would also receive a partial scholarship proved too tempting. “I couldn’t pass up the opportunity,” says Shepherd. It would turn out to be an important decision for Shepherd. At ASU, he would get both his undergraduate and graduate degrees in business. It was also where Shepherd would meet his future wife, Pauline. “We had known each other from attending rival high schools, but we reconnected in a music appreciation class in college,” remembers Shepherd.

Pauline and Bruce were married at the end of what would be Bruce’s graduate school year and Pauline’s senior year of undergraduate school. Both of them agreed about where they might like to spend the next chapter of their life. Explains Shepherd, “We knew that we wanted to stay in N.C.” When an opportunity came along that seemed to fit the plan, Shepherd pursued it. “A friend of mine mentioned a job opening he thought would be the perfect fit for me. Next thing I knew, I was offered the position as an occupational counselor at the College of the Albemarle in Elizabeth City.” The Shepherds’ adventure in Elizabeth City lasted several years.

While his friend may have been the way he came to learn about the opening as an occupational counselor, he believed his career would be influenced in other ways. “I have a strong faith in God,” explains Shepherd about the divine hand he believes influenced his career. “And another one of those moments where things seemed to line up like they were supposed to was discovering a position for McDowell Technical Community College in Marion.” Shepherd had found a mailing that talked about a dean of students position. Initially, he tossed the letter in the trash can. “After thinking on it and talking with Pauline, who had encouraged me to apply for it, I realized I needed to at least give it a shot. When I had gone back in to see if I could find it, my trash had not been emptied, and I called the president immediately,” recalls Shepherd. After visiting the campus and spending the whole day with the president, Shepherd was offered the job.

After five years in Marion, Bruce and Pauline welcomed their first son, Jon. Not long after, their daughter, Megan, made her debut. However, there were even more changes ahead. “In 1980, I ran into a friend of mine who was at Forsyth Technical Community College in Winston-Salem. He mentioned that there was an opening for director of admissions and records,” notes Shepherd. It turned out, that would be Shepherd’s next career move where he would be afforded many opportunities to expand his resumé. “I wore many hats at Forsyth Tech where I spent 26 years to the day I started. I worked in admissions, did federal reporting, was their registrar, and also helped with reporting student data.” Shepherd joked, “I only left because I was retiring.” During Shepherd’s tenure, he also went back to school himself to get both his educational specialist Degree (EdS) and doctorate degree from the University of North Carolina at Greensboro.

When it came time for retirement, it ended up not being quite so permanent. “I was at an ASU homecoming when I was approached by a friend to become the registrar for Wake Forest’s physicians assistant program. I stayed there for several years and enjoyed my time there. And then, I retired again,” smiles Shepherd. Many of Shepherd’s friends who knew and respected his work ethic suspected that he would stay in retirement for only so long. They were right. Shepherd was approached to go to Surry Community College to head up a two-year federal grant program. Once it was completed, Shepherd embraced retirement one more time. Again, that didn’t last long. “My wife said if I was going to retire, she would plan to head back to work. I contacted a friend at Forsyth Tech to see if they had any openings, and ended up breaking out of retirement for one final time to head back as their academic advisor for GED students. “I love motivating students and keeping them on track,” reflects Shepherd. “I also taught a few math and reading classes while I was working there.”

With both Pauline and Bruce back in the academic setting (Pauline was teaching part time at Meadowlark Elementary School), they were enjoying their community contributions. Bruce was thrown a curve ball that halted his professional track. “Unfortunately, I was diagnosed with pancreatic cancer. When I got a call from my doctor, I closed my office door. I spoke to God for the next 30 minutes the way I would be speaking to someone if they were right there in person. Biblically, when you can’t control a situation, you turn it over to God. That’s what I did,” explains Shepherd. “Although the cancer is an aggressive type, I know I’m in a win-win situation. I told God that if I passed away in a few weeks, I’d be in eternity with Him. Although, I would still love the chance to spend some more years with Pauline, my kids, and grandkids if possible, I win either way.”

For a man who spent his entire career and personal life motivating others in the classroom or on the fields playing sports, Shepherd chooses to focus on his biggest blessing, his family. “I feel so lucky that I’ve had the opportunity to be a grandparent. Being a parent was amazing. Pauline and I had pretty good ones. Pauline was and is the backbone of our family. As we see our kids emulate what we taught them with their own children, it’s so gratifying,” reflects Shepherd.

Shepherd celebrated his birthday on April 14. In these times, when the coronavirus has forced us all into voluntary quarantine, it was not possible for his friends and family to celebrate his birthday as they might have liked by throwing him a big party. Instead, Shepherd’s daughter Megan organized a parade that included more than 40 stops at the homes of friends and well-wishers who all wanted Bruce to know how much they loved and appreciated him. They drove by the homes of many people who eagerly came out to their yards armed with signs displaying their wishes for a happy birthday and appreciation of him.

The next milestone Shepherd is eager to celebrate is his 50th anniversary with Pauline next summer. “We’ve always made time for each other at the end of the day. We’d sit and have a glass of wine and unwind with all of the things that happened in our days. We always knew what was on each other’s minds,” notes Shepherd.

Upon reflection, it seems there is much in Shepherd’s life to celebrate, whether it is on his birthday, or for the anniversary he shares with his wife, or just when sitting down at the end of a well-spent day.