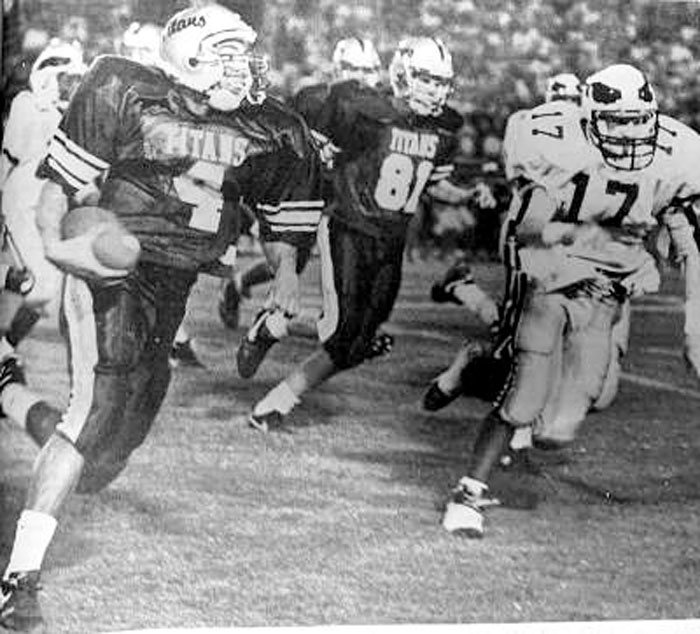 This is the first of a three-part series on the greatest postseason run in West Forsyth football history, the 30-year anniversary of the 1990 state runner-up team.

Bear with me. This is about the 1990 West Forsyth football team, I promise.

The Titans have been a consistent power on the gridiron for 35 years. They’ve won so regularly that a seven-win season is practically considered a debacle.

You have to be a certain age to fully appreciate what West has done since 1985. Here’s some perspective: West served as nothing but cannon fodder in the early years.

The school’s first football coach was Gus Young. From a distance, it seems like he did amazing things the first two years, the brand new program going 5-4-1 in 1964 and 6-4 in 1965.

Denny Zeiters took over in 1981. After his fourth year, his Titans were 7-33 overall and 2-18 in conference play. But Zeiters eventually transformed West from joke to juggernaut. In 1985, West’s first year as a member of the CPC, it finished 6-4 for its first winning season in 20 years. The Titans went 10-1-1 in 1986, sweeping all seven league games and celebrating their first CPC championship. From 1985-90, Zeiters went 53-15-4.

The 1989 Titans captured Clemmons’ imagination by going 13-1 and 7-0 in the CPC. The record-setting season included the longest playoff run ever, a trip to the regional final. That year’s JV squad went undefeated, setting the stage for 1990.

The ‘90 Titans wanted to take a few more bites at the apple, and they did, bouncing Garinger, Carver, East Forsyth and Page in the playoffs and punching an unprecedented ticket to Chapel Hill for the 4-A state championship game. On the other side of the field was Richmond County, the two-time defending state champion.

Everyone knows the title game ended with one of the most heartbreaking losses imaginable. West led 7-3 with seven seconds left. The Raiders were at the West 33 with no timeouts left. Eric Thomas, who wasn’t a throwing quarterback, scrambled out of trouble and absorbed a blow as he unleashed a Hail Mary from the West 39. The pass ricochetted off a Raider and into the hands of tight end Michael Johnson, who made the catch in the end zone with all zeroes on the clock. It was Johnson’s only catch of the season. West lost the grand prize by a millimeter, 9-7.

The ending at Kenan Stadium overshadowed an epic season. Pull up a chair and let’s take a trip down memory lane.

Although there was an endless amount of hype going into the season, Zeiters did not offer a glowing assessment as West prepared for Carver.

“One of the main things we’ve got to do at this point is find our identity as a team,” he said. “We’ve got the talent (to win the CPC again), but we’re lacking the intensity. Last year the guys were on a mission to win the state championship. But this year our players have lacked motivation. And without that, all the talent in the world isn’t going to do you any good.”

Fans received mixed signals in a scoreless opener. (There wasn’t overtime for nonconference games back then.) The defense performed beautifully; the offense was a disappointment.

Braun completed 12 of 19 passes for 163 yards, including a 30-yarder to Bovender (five catches for 103 yards) on West’s first possession of the second half. Then Braun rolled right and found tight end Bret Rice to give West first-and-goal at the Carver 8. After three unsuccessful runs, Marc Liner trotted out for a 26-yard field goal. He pushed it wide right.

The Yellowjackets had the ball at the West 13 with under three minutes to play, positioned perfectly to break the tie with little time left. But Leggette made a tackle for a 3-yard loss. Carver’s field-goal unit came out on fourth down. Walkush saved the day, breaking through the Carver line and partially blocking a 31-yard try.

“On the rush, I teamed up with Lee Brush and Andre McSwain and luckily was able to get through their line pretty easily,” Walkush said. “Once I moved near the kicker, I wanted to make sure I got a piece of the ball.”

McSwain turned in 11 tackles. Mike Murray had eight. Workman and Antwan Jeffries had seven each.

After two games, the Titans might have been unbeaten, but they knew they were certainly not invincible. For the second time, they performed a minor miracle to salvage a tie.

East Forsyth dominated the game. It had 345 rushing yards, 22 first downs and clicked off 68 offensive plays. By contrast, West had four first downs, ran 33 plays and scored one offensive touchdown. East outgained West 378-156 – and 76 of those yards came on Bovender’s fake punt for a TD. West was helped immensely by East’s six fumbles and two special teams TDs.

With West trailing 7-0, punter Bovender improvised once he received the snap, sprinting 76 yards to the end zone.

“That was all Gray’s idea,” Zeiters said. “On his first punt, he noticed an opening on the right side. So the next time he dropped back to kick, he just held onto the ball and took off.”

On the second half kickoff, Leggette found a seam, juked the kicker and dashed 97 yards. The extra point was blocked as West settled for a 13-7 lead.

Late in the third, Bovender punted. East’s Anthony Reader mishandled it and Tim Beeding recovered at the Eagles’ 31. Three plays later, Braun went up top and connected with Bovender in the left corner of the end zone for a 20-yard score. West went for two, and Braun and tight end Walkush hooked up as West grabbed a 21-14 lead.

East opened the fourth quarter with an 80-yard drive that knotted the score at 21. Late fourth, East marched from its 13 to the West 9. The Eagles had first-and-goal with under a minute to go, but West would dodge another bullet. East was flagged for intentional grounding, pushing the ball back to the 19. On second down, QB Johmar Barringer fumbled and Leggette recovered for West.

They breathed a sigh of relief after a resounding victory.

“We finally showed up,” Zeiters said. “We basically told the guys before this game that it was time for us to live up to our potential. A lot of people had picked us to be among the best teams in the area, and it was time we put that team on the field.”

Brush blocked a punt and returned it to the Glenn 1, setting up Braun’s QB sneak for a 7-0 lead two minutes into the game. Myers sparkled with 113 rushing yards on 15 attempts.

Meanwhile, the West defense harassed Walker. He threw for 170 yards, but most of that came after the issue had been decided.

“All the credit for stopping Walker goes to coach (Dave) McConnell and coach (Ray) Bell,” Zeiters said. “They devised a special game plan to confuse Walker, and it obviously worked.”

Workman, Phillip Warren and Jeffries combined for 23 tackles, three sacks and two batted passes. Warren had nine tackles and a forced fumble in his first start at nose guard.

“The big surprise was Warren,” Zeiters said. “He was one of the personnel changes we made. Even when he didn’t make a play, he was putting pressure on Walker. I don’t think their center has seen him yet.”

Warren’s emergence on defense allowed Buey to move to offense as a fullback, and he responded with nine carries for 43 yards and several hole-opening lead blocks for Myers.

The nonconference schedule wasn’t the smoothest of glides. But at 1-0-2 entering CPC play, the fuse had been lit.

Next week: Part II — a first-place finish in the CPC.

Going to The Show: Walker recounts experience in Atlanta