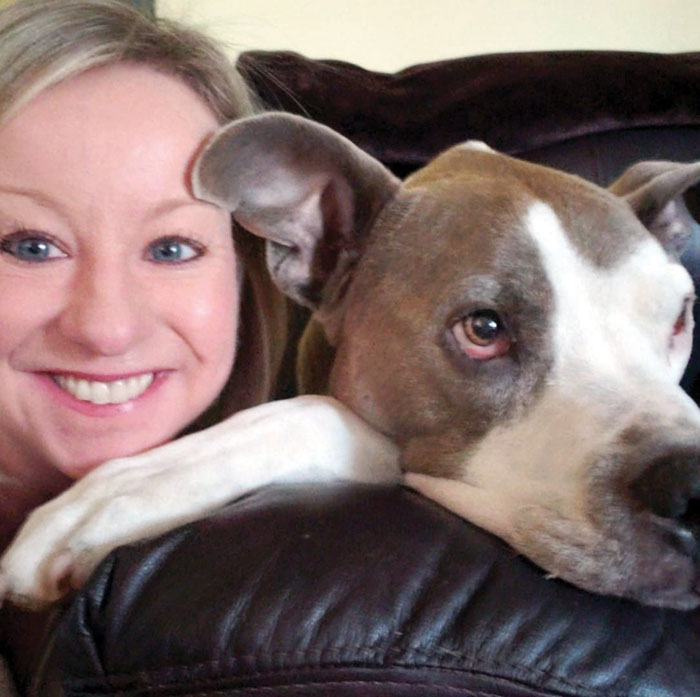 Kerri Humphrey with her dog, Hammer, who passed away recently.

Kerri Humphrey grew up in Welcome. “What I really loved about my childhood was how much my mom encouraged me to play outside,” remembers Humphrey. “We lived next door to a rather large farm. The second I got off the bus, I completed my homework before running next door to help with the animals. They had a wide variety of animals. It was there that I really discovered my passion for helping them.”

Humphrey led a very active and productive life outside the farm where she enjoyed helping. Humphrey was involved in softball, gymnastics and cheerleading as well. Her academics did not suffer from all of her activities. During her senior year of high school, Humphrey was offered a full academic scholarship to the University of North Carolina at Charlotte. “I was raised by my single mom, and we had just moved to Lewisville. I didn’t want to leave her so I chose to go to Forsyth Tech,” explains Humphrey.

During Humphrey’s first year in school she decided to start working in property management at Tsuruta Limited Partnerships. “It was suggested to me through a friend,” notes Humphrey. “Although, always having such a love for animals I also got a part-time job as a kennel attendant before becoming a vet tech for 10 years. Working as a vet tech I loved the client education aspect. The vets have only a limited amount of time in an appointment, and I liked being able to stay and talk to them, as much was needed. One of my favorite procedures was doing dentals. I got to see their teeth have such a change that I knew was a large factor in their health.”

Humphrey assumed her love for the medical profession would make nursing school a good next step. “I realized once I started doing my clinical rotations that my passion was better served helping animals medically,” recalls Humphrey. Around the same time that Humphrey was realizing how much she missed her furry patients, her previous employer called to see if she would consider coming back to her job working in commercial property management. “I’ve been back at Tsuruta for the past 10 years. It’s a very productive environment because I have my own office and space. They also let me bring my dog to work,” says Humphrey. One of Humphrey’s buddies during her past 10 years at work was named Hammer, a rescued pit bull that was her constant companion. “Hammer passed away not too long ago and it was truly devastating.”

Humphrey has still managed to find a way to honor Hammer’s memory and the love he brought to her life. Humphrey is active as a foster and volunteer with the Humane Society of Davie County. During the shelter-in-place order, Humphrey felt compelled to step up. “I went to the shelter to get the last dog that was there right before they had to close to the public. After I fostered her briefly, I opened my home to another dog from the Humane Society of Davie County. She was a senior pit bull with a bunch of medical issues. She’s not the type of dog that people will be fighting over because of it. I wanted to increase her odds of having that chance,” explains Humphrey. Ultimately, Humphrey realized that her most recent foster, Roxy was more than a temporary visitor. Roxy was what they call in the rescue world a ‘failed foster.’ “Once Roxy is done with her medical treatment, I plan to adopt her,” says Humphrey. Her experience in rescue as a board member and volunteer in various other animal organizations has always fueled her passions for making a difference.

Our neighbor has discovered by following her instinct and heart that doing what she loves has always taken her down the right path. Humphrey has never been scared to change the path to take her to the right road of contentment and fulfillment.