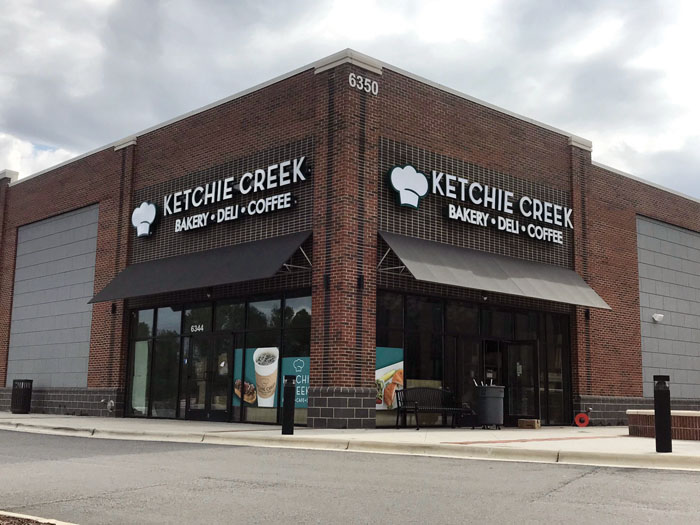 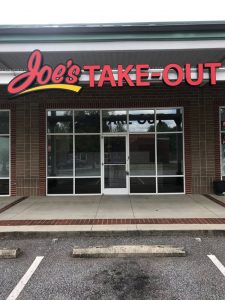 Joe’s Takeout is located in Tanglewood Commons. Photo by Jim Buice, for the Clemmons Courier.

Ketchie Creek, Joe’s Takeout waiting for restrictions to be lifted before opening

With so many restaurants struggling to stay afloat during the coronavirus shutdown, it’s hard to imagine anyone who would want to open a new eatery in these days.

Well, Ketchie Creek Bakery & Café and Joe’s Takeout actually were already planning to open in Clemmons before the pandemic started in the middle of March, so they’re waiting until restrictions are lifted and the business landscape improves.

Ketchie Creek — a popular destination for sweets, a full-service deli and coffee bar in Mocksville — decided to add a second location in the new Clemmons Town Center in 2019 and was planning on opening late last year before delays shifted the proposed grand opening until April.

But then… well, you know…

“We are ready to go, but it’s kind of hard to open under restrictions because you don’t want to open as takeout only or without a bang per se,” said Renna Welborn, who owns the restaurant with her husband Gerald.

Joe’s Takeout was the vision of the owner of Villa Grill in Tanglewood Commons long before takeout became the only way to eat out this spring. It has been set to open around the corner on the east side of the shopping center when… well, you know…

“It’s ironic because we had already started talking about doing Joe’s before all of this takeout business today,” said Georgia Kroustalis, who runs Villa Grill — featuring a menu that is American casual with a Mediterranean influence. “People want to have fresh food that is affordable, and we wanted to offer easy pickup on your way home from work where you can use your phone, and it’s very convenient.”

Ketchie Creek has deep roots in Mocksville, opening in a lady’s house in 1983, and was bought in 2008 by Gerald and Renna Welborn. Gerald is from Lewisville, and Renna is from Clemmons. Both graduated from West Forsyth High School.

“It’s been a dream of ours for a long time to have a second location,” said Renna Welborn. “Our customers have been begging for it. We’ve looked for a location for years in Winston-Salem, Clemmons and all over Forsyth County and think this Clemmons spot is perfect for us.”

The location in the booming Village Point area is close to I-40 and a short ride down the interstate to Mocksville.

Welborn said that Ketchie Creek is known for its cakes and desserts and that the cream horns are the No. 1 single best seller. She added that the full-service deli offers a healthy lunch, which is very popular as is the coffee bar and breakfast items — including muffins and quiche.

Welborn said that the Clemmons restaurant has a smaller kitchen than Mocksville but the two stores are close to the same size in seating and that Clemmons actually has more outdoor seating.

The original plan was to open the restaurant in Clemmons around April 20, but Welborn said that they will wait until getting notifications from the health department on what they’re allowed to do.

“That’s what we base our decision on,” she said. “I’ve not heard exactly how that will work. It will probably be a couple of weeks once we get the word. I sure hope we can open by June, but I don’t want to make any promises.”

Welborn said that the restaurant in Mocksville has continued to hold its own over the last six weeks after restrictions prohibiting in-house dining with takeout, curbside and delivery as the other options.

“We’re doing well and staying busy,” said Welborn, who added that she hasn’t had to let anybody go but that hours have been cut for employees during the coronavirus pandemic. “Our customers are thankful we’re here and have been so supportive.”

Welborn estimated that overall business is only down about 25 percent.
“We can’t complain,” she said. “Actually, we do have a great setup for takeout as far as the types of foods we have.”

Unlike Ketchie Creek, Villa Grill’s sister restaurant doesn’t share the same name and is even in the same shopping center across from Tanglewood.

“Joe’s Takeout is different than the Villa Grill with a different menu,” Kroustalis said. “We don’t want to compete against ourselves.”

Kroustalis said that the idea was spawned after seeing takeout account for 30 to 40 percent of the business for Villa Grill even before the coronavirus restrictions came down and closed the dining room.

“K&W is no longer in our community (the Clemmons location closed last summer), so we thought it might be a good fit to offer fresh vegetables and comfort food,” she said.

The “Joe’s Takeout” sign actually went up a few weeks ago in a location that previously was home for Papa John’s Pizza, which moved to the other end of the shopping center where Harris-Teeter is the anchor tenant.

Kroustalis said that her two restaurants won’t be sharing food or kitchens and that Joe’s, with about 1,000 square feet of space, is about half the size of Villa Grill. The name “Joe’s” comes from a spaghetti item on Villa Grill’s menu named after a family member.

For now, Kroustalis has an eye on the near future when the timing is right in opening Joe’s Takeout while focusing on keeping thing going with Villa Grill. She said while the takeout has gone well that sales are down overall between 30 to 35 percent.

Next, she said, is waiting to hear from the health inspectors as restrictions are lifted during the governor’s phased approach and see what the parameters are going to be with the reduced capacity of seating in the restaurant.

This is the ninth year for Villa Grill in Clemmons, which Kroustalis likes to call a “Cheers” kind of place. She said she learned a lot in developing the restaurant from her father-in-law, Nick Kroustalis, who was one of the original owners of the Carriage House Restaurant in Winston-Salem.

Postseason run: A look back at West Forsyth’s 1990…