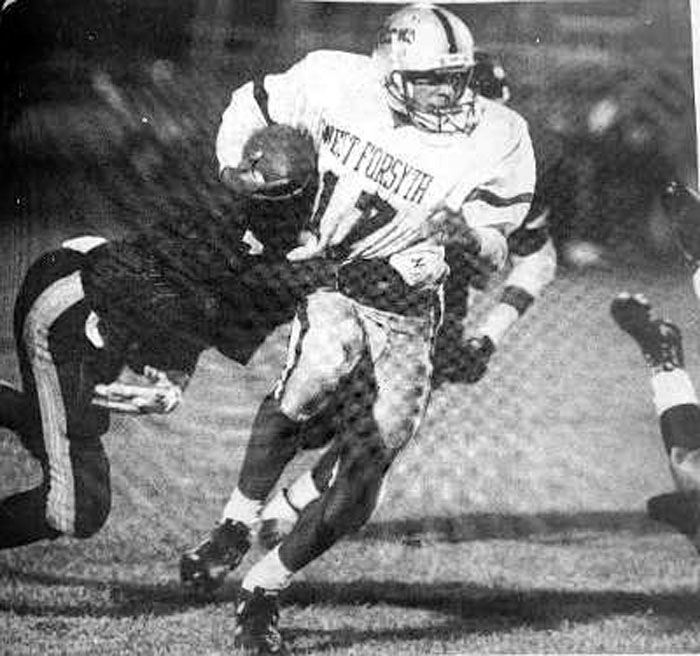 Mike Keller attempts to break away from a Mt. Tabor defender.

By Brian Pitts
For The Clemmons Courier

This is the third in a series on the greatest postseason run in West Forsyth football history, the 30-year anniversary of the 1990 state runner-up team.

The 17-14 loss at Parkland in the rain stunk like a piece of rotten meat. West Forsyth was in control, 14-0, before a disastrous collapse.

Fortunately for the Titans, there was no hangover to their first loss of the season. They glued themselves back together in time for visiting Davie County.

After starting 0-5, the War Eagles gathered momentum with wins over Mt. Tabor (14-3) and Reynolds (20-12). But on the game’s first play from scrimmage, linebacker Andre McSwain inspired fire in the Titans, doing a Lawrence Taylor impersonation against Davie running back Germain Mayfield. No gain.

That was a sign of things to come. Davie was entirely overmatched in a 28-0 wipeout.

“Davie was coming off back-to-back wins, but I felt like we had the size to dominate them defensively,” coach Denny Zeiters said.

Davie managed just six completions for 61 yards. The first of two interceptions by West’s defense set up the first score in the second quarter. On the first play following Freddie Transou’s pick, receiver Gray Bovender took the ball on a reverse and sped 20 yards to the end zone, and kicker Marc Liner drilled the first of four PATs.

Before halftime, Maurice Leggette capped a 44-yard drive with a 3-yard touchdown. In the third quarter, Antwaune Buey finished a 51-yard drive with a 5-yard score up the middle. In the fourth, Leggette, who had to replace injured Oscar Braun at quarterback, hit Bovender with a 10-yard TD pass.

Braun completed six passes for 80 yards before injuring his thumb while trying to recover a fumble. The offensive leaders were Bovender (three catches for 65 yards, two TDs), Kevin Myers (11 carries for 57 yards), Mike Keller (five carries for 46 yards) and Leggette (two carries for 28 yards). The o-line was anchored by Taylor Addington and Mike Dail, both of whom graded out at 97 percent.

The defensive star of the game was Buey, who had eight tackles, an interception and a fumble recovery in his first start at nose guard in five weeks.

At 5-1-2 overall and 4-1 in the Central Piedmont Conference, West remained tied for second with Grimsley, one game behind Parkland.

Mt. Tabor was coming off its first win, and that was against winless Reynolds. The host Spartans were predictably trashed by the Titans, who set a program record for points in a game.

West, though, had a slow start. It was 0-0 after the first quarter.

“I was a little concerned after the first quarter because we were keeping Mt. Tabor in the game,” Zeiters said. “But when we put two touchdowns on the board in the second quarter, I started feeling a whole lot better.”

Despite being less than full strength with the hurt thumb, Braun went 8 of 15 for 107 yards while throwing four TDs. Two of those scoring strikes went to Leggette, the multi-dimensional senior who finished with 32 receiving yards, 51 rushing yards on two attempts and a 23-yard pick-6. One of Bovender’s three receptions resulted in a TD.

“Oscar played about as well as he has all year,” Zeiters said. “He’s been working with (QB coach) Kim Devault on how to read defenses and it’s apparently paid off.”

Keller, a junior, and senior Phillip Warren did most of the damage on the ground. Keller had 14 carries for 61 yards and a TD, while Warren, a newcomer on offense, ran five times for 39 yards and a TD.

“We knew Phillip had the ability to make things happen offensively because he once scored 51 points against a Pop Warner team that had Transou and McSwain,” Zeiters said.

“We went into this game knowing we needed a win, so we were determined to hold them until our offense got going,” McSwain said. “A playoff spot is still at stake so we couldn’t afford to let up.”

When the Titans (6-1-2, 5-1) returned to school, the score from the Grimsley-Parkland game brought pure joy. The Whirlies had knocked off Parkland to force a three-way tie for first.

“There was a lot of celebrating in our locker room when we heard Grimsley was beating Parkland,” Zeiters said. “With everybody tied, we have a shot to win our third straight conference championship.”

On Senior Night in Clemmons, West’s defense held the Demons to 154 yards, picked off three passes and got 10 tackles from Transou and two picks from Leggette. Put another way, there was nothing new to see here.

“Our secondary has played great all season, and this night was no exception,” defensive coordinator Dave McConnell said. “Our line did a good job of hurrying their quarterback, and when he put the ball up, our defensive backs were there for the interceptions.”

While the defense did its usual thing, the offense underwhelmed. Thank goodness for Bovender. The sensational senior scored both touchdowns, picking up the slack for an offense that managed just six first downs against the winless Demons.

“Reynolds played us tough on defense, but we also made a lot of mistakes,” Zeiters said. “We had nine penalties and five fumbles. There’s no way we should have numbers that high at this point in the season.”

Bovender’s first heroic play came in the second quarter, when the Demons appeared to have his route diagnosed. He overcame double coverage by reeling in a tipped pass and completing a 49-yard score.

It was 7-0 at halftime. But on the first play of the second half, Bovender received the kickoff and added to his resume. He cut across the field, sped 80 yards and made sure West fulfilled its CPC destiny.

The offense ran a bit hot and cold during the regular season, averaging 20.6 points per game and benefitting from a handful of pick-6s. The defense, though, was jaw-droppingly good all 10 weeks, allowing an all-time low 65 points and recording four shutouts (one short of the program record at this point).

“West’s record for consecutive shutouts is four, and we’d like to tie in (the first-round playoff game against Garinger),” McConnell said. “And this group can do it. They’ve been amazing all season.”

Coming into 1990, the coaches had to replenish eight spots, the only returning starters from the 13-1, final-four team being Tori Workman, Bovender and Transou.

“When you looked down our roster, the one thing that stuck out was our lack of experience,” McConnell said. “Most of our projected new starters were underclassmen. We figured it was going to take some time for them to get it together.”

As it turned out, the unit was nothing short of brilliant. In the opener, with seven underclassmen on the defensive side of the ball, West played Carver, the eventual Metro 4-A Conference champion, to a 0-0 tie. After the 21-21 tie with East Forsyth in Week 2, West held the next eight opponents to 5.5 points per game. Seventeen of 44 points across eight games came in the rotten loss to Parkland.

The Titans closed the regular season with a whopping 25 INTs, including seven by Leggette, six by Bovender, five by Transou and four by Lee Brush.

“We’ve stressed to our secondary all season to not give up the big play,” McConnell said. “And with the exception of a halfback pass against Parkland, they’ve been perfect. In the past we’ve had guys who would make some great plays, but they would also get beat on occasion. This group hasn’t been that spectacular, but they have been steady. They haven’t given up the long ball.”

A big piece of the defensive success were linemen like Workman, the No. 1 tackler and a devastating force at 6-4, 238 pounds.

“Our turnover ratio has to be something like five or six to one,” McConnell said. “Anytime you get those kinds of numbers, you’re going to be pretty tough to score against.”