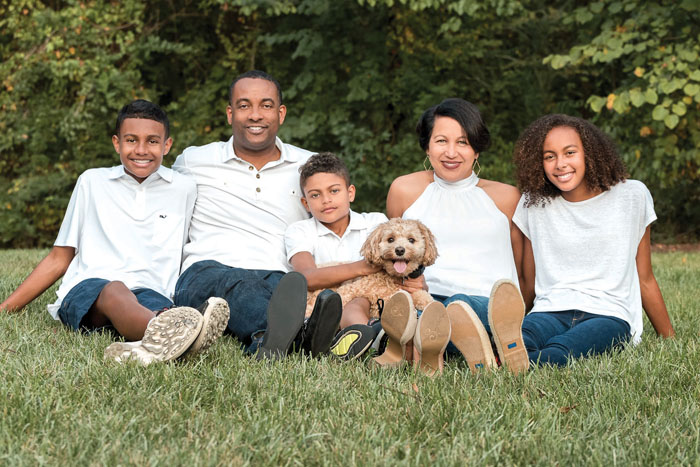 As we grow up, we often have experiences that teach us what we may or may not want to do. It seems Dr. Pam Oliver had many such events. For instance, she developed a strong work ethic at a young age that she believes has a lot to do with the time she spent on her grandparents’ farm in Rocky Mount. As the middle daughter of three children, Oliver spent many summer days helping care for the cucumbers and tobacco that grew in her grandparents’ fields. She believes that experience taught her something else. “I knew early on that I was not cut out for farm life. I told myself that I would study as much as I needed to in school because of it,” reflects Oliver.

Oliver also came to learn that she enjoyed leadership roles as well. She ran track for a year in high school before she realized her true passion was managing the team, which she did for the next three consecutive years. “That’s the beginning of realizing my passion for leadership,” notes Oliver.

Oliver’s teachers noticed both her leadership and academic pursuits. “When it came time to apply for colleges, I had always been a fan of the University of North Carolina at Chapel Hill (UNC),” she remembers. She would be a first-generation college student in her family. One can imagine the joy she felt when she got some good news about her future. “My guidance counselor nominated me for the Morehead Scholarship,” recalls Oliver.  She was awarded both the Morehead-Cain and the Board of Governors’ scholarships. “ That made going to UNC a done-deal. I knew that I wanted to study medicine. I was influenced heavily the summer before my junior year when my father was diagnosed with leukemia. I was inspired by the team that took care of him — the impact that they had on his and our lives.”

Unfortunately, Oliver lost her father several weeks before heading off to college at UNC. “I knew my dad would have wanted me to go. Being able to go off to school and dive into studying biology helped me heal. I knew that I still had to deal with it in my own way over time,” she recalls. It turned out she was right about the curative powers of moving on in the right environment. Oliver enjoyed her undergraduate journey as much as she had hoped. In fact, when it came time to leave, Oliver decided she wanted to stay at Chapel Hill and went straight into their school of medicine program to pursue her doctorate.

“I appreciated the opportunity to do lots of different rotations during my second and third years of medical school. I learned fairly quickly that I loved the diversity of working in OB-GYN. I appreciated the great variety of continuity of care, surgery, and deliveries that you got in the field,” explains Oliver.

Having narrowed down the area of medicine that interested her most, Oliver decided to also pursue a master’s degree in public health at UNC in maternal and child health. “UNC had one of the top public health schools in the country. I thought it would be very helpful to utilize it,” notes Oliver. She was able to complete this program while still enrolled in medical school between her third and fourth years.

Eventually, it became time to finally leave Chapel Hill and begin her residency in obstetrics and gynecology. Oliver headed to Wake Forest School of Medicine in Winston-Salem after graduation. There were exciting changes in her personal life at this time as well. “My now-husband, Mark, and I met at a medical conference in Louisiana while we were both in school still. I joked with him that I had planned to be swept away by a plastic surgeon when I traveled to Louisiana. Ironically, even though we met in Louisiana, we realized we had lived only five miles apart while he was in dental school at UNC and I was in medical school,” recalls Oliver. Mark and Pam married and went on to expand their family with twins, a son and daughter, the summer she completed her residency. The Olivers loved parenthood so much, they added another son just several years later to become a family of five.

Oliver found that parenting was something that would round out her professional career as well. “Becoming a mother was priceless to so many practical parts that you need as a practicing physician that you don’t learn during your residency,” observes Oliver. “The real-life skills that you learn through experience gave me a great degree of empathy. Things like breastfeeding, childcare options — you are able to put it all into perspective, especially the topics in medicine that you can’t put an answer to.”

The new mom embraced the role as parent and working professional in 2005 at Novant Health WomanCare. Perhaps it is not surprising that, during her time at Novant, Oliver took on several leadership roles in various positions as well. “I always had an interest in health care and medical issues from a global perspective,” notes Oliver. After 13 years in the field, Oliver became the executive vice president at Novant Health and president of Novant Health Physician Network. Over the years, Oliver has developed a guiding philosophy, “At the core of helping others, I feel that we need physicians at the table who can help shape decisions around health care, the care team, and the patient. These leadership roles allow me to work a different part of my brain.”

Although her professional schedule keeps Oliver busy, she is very committed to serving the community as well. She has been on the Summit School Board of Trustees since 2015 where all three of her children have attended school. Never one to let the grass grow under her feet, she also dedicates her time to Jack and Jill of America, Incorporated, and Boston-Thurmond United as a way to help provide programming leadership development for our youth and to try to help elevate and improve the underserved community in our area.

Whatever the experiences Oliver accumulated as she worked on her grandparents’ farm and as she grew in high school and through life, she has managed to turn them into a life of helping others. A life that seems full of meaning and purpose.