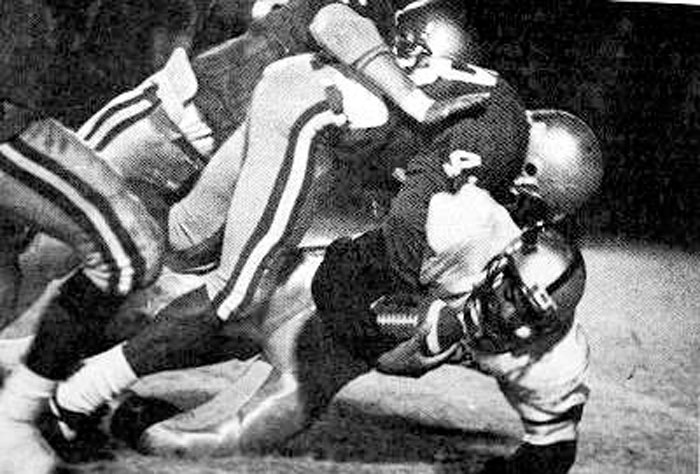 Maurice Leggette separated his shoulder on this play against Page.

By Brian Pitts
For The Clemmons Courier

This is the fifth in a five-part series on the greatest postseason run in West Forsyth football history, the 30-year anniversary of the 1990 state runner-up team.

When West Forsyth crushed East Forsyth in the third round of the 4-A playoffs, the Titans were bound for the semifinals for the second year in a row. (They never climbed this high in the first 25 years of the program, 1964-88.)

Meanwhile, the Titans were trying to reach the state finals for the first time ever. If facing Page wasn’t challenging enough, they had to travel to Greensboro without their head coach, the man who orchestrated a sensational turnaround from laughingstock to state contender during a 10-year run (1981-90). Denny Zeiters came down with a brutal stomach virus and had to stay home.

“I was laying down in the coaches office and about as white as our game pants when the other coaches told me to go home and let them take care of the game,” Zeiters said. “I didn’t want to but I knew they were right. I didn’t want to go (to Page) and end up making a big coaching mistake because I didn’t feel good.”

“By the time I found out Denny was staying at home, it was too late for me to get worried,” McConnell said. “And that helped a lot. If I’d had time to really think about it, everything would have probably gotten screwed up.”

The unflappable Titans shrugged off the adversity, winning 10-6. Oscar Braun and Gray Bovender hooked up for a big play that was reminiscent of so many others during the season, and their defense ripped out Page’s heart, stomped on it and threw it out like a used paper towel.

It was the most decisive four-point victory in history. The Pirates (10-4) finished with one first down. They crossed midfield once in each half.

“I just can’t really describe what the last 20 seconds felt like,” McConnell said. “All the celebration on the field was great, and the enjoyment we all felt after we made it back to the locker room was even better. I think everybody on the team shared a real sense of fulfillment from getting the job done.”

“We had gotten so close last year (when West lost to AC Reynolds in the semifinals) that we were determined not to go through that letdown again,” Braun said.

In the first quarter, West penetrated the red zone, but Marc Liner was wide right on a field goal. He would redeem himself.

The signature moment came with the score 0-0, West at the Page 20 and 10 seconds on the first-half clock. McConnell called timeout.

“To be honest, I was planning to call a quick-out pass to get us in field goal range,” he said. “But then I looked at Gray and even though he didn’t say anything, I could tell he thought he could score. So I changed the call.”

Bovender ran an out-and-up pattern. Braun lofted a perfect pass over a Page defender, and Bovender made a leaping catch in the right corner of the end zone with three seconds left. After his 13th TD among 38 receptions, Bovender got up and pointed to West’s delirious fans. Liner tacked on the kick for a 7-0 lead.

“That catch really changed the whole tone of the game,” McConnell said. “We’d missed a field goal and had come up short on several long passes that would have put us deep in Page territory. If we hadn’t gotten on the board when we did, I think it could have been a totally different game in the second half.”

After the Titans drove to the Page 19 and saw Liner’s field goal get blocked in the third quarter, they picked up the insurance points in the fourth. They drove inside the Page 10 and summoned Liner, who split the uprights for a 10-0 cushion.

West recovered a fumble at the Page 11 with seven minutes remaining. But instead of knocking Page out, the Titans failed to convert on fourth down. The Pirates had life one play later, when Ryan Renne went deep and found Shawn Colvin, who scored on a 96-yard pass play. After a missed extra point, it was 10-6 with five minutes to go.

“We were a little worried, but we had a lot of faith in our defense,” McConnell said.

Although the Titans churned out a first down, they had to call out the punt team from its 47. That’s when Page made a critical mistake — roughing the punter. The penalty gave West a new set of downs and it milked the clock to :51 before punting.

Renne threw four straight incompletions, setting off bedlam on the West side. It had a seventh straight win and a Western Regional title.

“I should probably retire from head coaching right now,” McConnell joked. “How many coaches can say they have a 1.000 winning percentage and they’ve beaten Marion Kirby?”

The ferocious defense had battered another opponent into submission. No one was aces more often than Antwan Jeffries, the 6-2, 245-pound lineman who registered double-figure tackles, a sack and wreaked all kinds of havoc.

In the offseason, Jeffries was inspired by Tori Workman’s own turnaround.

“Tori has been a big help to me personally,” Jeffries said. “He was having a tough time in school, but he started trying harder and now he’s on his way to college. And I figure if he can do it, so can I.”

There was sad news. Maurice Leggette — a two-say starter, a key spoke in the West wheel — suffered a shoulder separation in the second quarter. His season was over. He had surgery four days later.

“It was the best night and the worst night for me,” Leggette said. “It was great that we won the game, but I was pretty upset that I couldn’t keep playing. This is going to be the biggest game of the year, and it’ll be tough to just watch it from the sideline.”

Four playoff opponents down, one to go.

“We’re all really happy about this win, but the season’s not over yet,” tight end Travis Walkush said. “We’ve still got one more game to go and we can’t lose sight of that.”

Standing on the opposite side at Kenan Stadium in Chapel Hill on Saturday night, Dec. 8 was an absolute juggernaut, Richmond County. The Raiders were 13-1, had captured back-to-back state titles and were riding a 43-1 tear.

And they were averaging 33 points a game, their lowest point total being 21, their streak of double-figure points standing at 51 games. Before a miracle of miracles on the game’s final play, the West defense swallowed yet another opponent. Jeffries, Workman and Co. held Richmond to 204 yards.

“You can credit (McConnell) for that,” said Zeiters, who was back on the sideline following his sickness. “He had our guys ready to play all season, and this game was no exception.”

With West behind 3-0, Braun threw long and Bovender did what he was meant to do: He sprinted down the sideline, caught the ball at midfield, eluded two defenders and went in for a 69-yard score. Liner’s kick made it 7-3 with 7:05 left in the second quarter.

The Titans were the superior team, but they left points on the field. Late in the half, Walkush made back-to-back receptions and West called timeout with the ball at the Richmond 19. Braun was forced to scramble and time expired on an incompletion.

In the second half, an interception, a missed field goal and a fake field goal that didn’t work kept Richmond in the game.

Even though the score was still 7-3, there was never a time when the West side felt, “We’re going to lose.” The Raiders’ offense went three-and-out time and again. When they punted with three minutes left, some of their fans headed for the exits.

With 63 seconds left, the Raiders were down to their last gasp, a running team needing to go 70 yards in a hurry with only one timeout in its pocket. Quarterback Eric Thomas ran for 12 yards, but three incomplete passes set up fourth-and-10 at the Richmond 42 at :25.

Coach Daryl Barnes made a gutsy call, a draw play to star running back Flip Ellerbe (137 rushing yards), who barreled up the middle for 25 yards to the West 33.

“You go with what brought you,” Barnes said. “If we didn’t get it, a lot of people would have second-guessed us for not passing.”

Still, the Fat Lady was singing. Only seven seconds remained, Richmond was out of timeouts and Thomas was 2 of 11 through the air. Face-painted West fans were throwing confetti. Thousands from Clemmons were ready to storm the field.

Then it happened. As you know, West lost in the most crushing way imaginable. Thomas took the snap under center. Chased by Workman, he scrambled to his right and slung a Hail Mary from the West 39. Workman laid the wood the instant Thomas released it. The pass wobbled to the right corner of the end zone. With zeroes on the clock, it bounced off the chest of receiver Michael Fletcher, who was knocked to the ground by one of West’s warhorses, free safety Freddie Transou. The carom went straight to Michael Johnson, a blocking-only tight end who had not made a catch all season.

Touchdown, 9-7 final. The Raiders had received a gift from the football gods.

“We had no business winning the game and no business making that catch,” Barnes said. “It was like it was meant to be.”

While pandemonium broke out on one side, the other side was gutted.

Zeiters said: “We had the play covered, but it was just one of those freak things. The pass went to (Fletcher) and he lost it when Freddie drilled him. We had three guys covering it, but we were running at the receiver the pass was intended for. You can’t blame anybody for it. It just happened.”

Braun: “I just stood there with my mouth hanging open. Then I dropped to my knees and started crying.”

Tight end Bret Rice: “With all the pressure and all that was at stake, it is sad that it had to be decided on a play like that. It made you feel like the Man upstairs just didn’t want us to win.”

Workman: “I was only a half a step from him when he threw it, and I just missed grabbing his arm.”

Transou: “I was in the middle of the field. I got there right when the ball did and I hit (Fletcher) hard. I knew he didn’t catch it.”

Johnson: “I thought it was to me, but it was just a bad throw. I saw it hit off Fletcher’s arms and bounce right into my arms. It was just luck.”

From the final-play-of-1990 viewpoint, it’s a story of what might have been. But there is another way to look at this. West had an 11-2-2 season that will last forever, and that’s the point of this five-part series. That’s why there are no agony-of-defeat photos. How many West football teams have reached the state championship game? One. The offense averaged an unspectacular 19.6 points, but it was always clutch. The defense – which allowed 6.2 points across 15 games, 3.6 over the last eight and pounded out six shutouts – was flat-out great.

“Everybody saw who had the better team Saturday and we’ve got a lot to be proud of,” safety Lee Brush said. “I think down the road we’ll reflect on this season and appreciate all the things we’ve accomplished. This team wasn’t expected to do too much, but we surprised a lot of people.”

A cruel reality of sport is the better team does not always win, but let’s close with this: The 1990 Titans rode the ride as far as it could go.