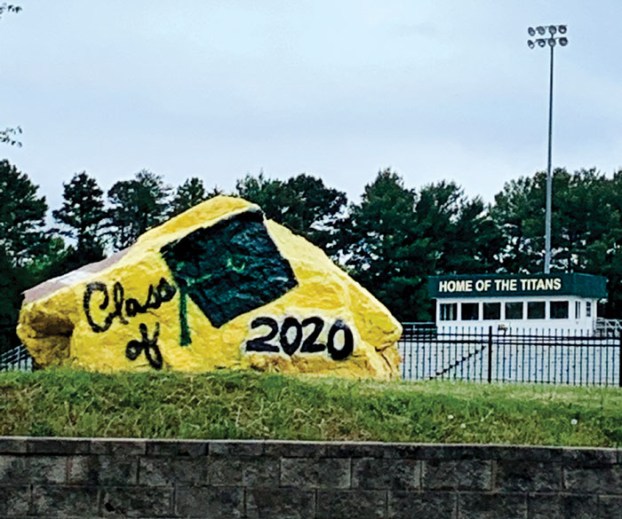 The spirit rock at West Forsyth High School is painted to honor the 2020 graduates. Photo by Larry Stombaugh, for the Clemmons Courier.

After the Final Bell — Graduation Edition: A thank you letter to local high school seniors

First of all, thank you, to all of you! Though not of your own choosing, you have sacrificed the last three months of your senior year of high school for the sake of the health and safety of your community. In doing so, you have missed out on participating in spring sports and not being able to perform in or attend school plays and musical productions. You have missed out on the distribution of yearbooks and going to your last high school prom.

In the place of an in-person graduation ceremony, many of your families have celebrated you with yard signs and balloons.  A wonderful gesture on their part, but you deserve so much more. The sacrifices that you have made are unprecedented for students of any generation.

As a former teacher who taught high school for decades, my heart has been heavy as I have been thinking about how all of you have been learning in a virtual setting in your homes rather than in a classroom full of your peers for the last several weeks before you graduate. It is true, that most (possibly all) high school seniors deal with “senior slack,” but those last few months of a school career are still important for the bonding that occurs and for the memories that are made.

I retired from teaching at the Career Center High School two years ago. I had five sophomores from my last group of students who are graduating with the class of 2020 in a few weeks. I remember all of you very well. You are five terrific students who are motivated and driven, but more importantly you are compassionate and caring individuals. You genuinely care about others, and without realizing it, you inspired me more than I inspired you.

I only know a few of the other seniors who are graduating in June, but like the five that I taught, I am confident that you are all special kids. You have been labeled “Generation Z.” According to the source of all knowledge known as the internet, your generation is not as dependent as others have been on your parents because you have used your technology skills to become resourceful and to make your own way. It is also noted that you believe strongly in dialogue to solve conflicts; a notable trait considering that active conversation is not a part of the virtual world that you have grown up in. You are also likely to make decisions in a highly analytical and practical way. All in all, it sounds like you are doing pretty well for yourselves.

I have attended many graduation ceremonies during my life. Some of them involved family members, the most significant one being my daughter’s graduation from West Forsyth in 2013. Others involved students that I taught over the course of decades as an educator.

I would like to share with you the most memorable and meaningful graduation speech that I ever heard. I don’t remember the man who delivered it, but I remember that he was introduced as a retired educator. I remember that it was an outdoor ceremony in June, and it was a sweltering hot summer day. The ceremony was for the graduates at a junior college where I taught at the time.

Like most of the attendees, my main hope after sizing up the speaker just before he was introduced was that his speech would be brief so that all of us could survive the heat and humidity of that summer morning without anyone passing out. I made the terrible misjudgment of stereotyping him because of his age. Guessing him to be in his eighties, I mistakenly assumed that he would deliver a long-winded and wandering speech that would leave most of the graduates and others attending the ceremony miserable.

My assumptions about the speech were terribly off the mark. The wise retired educator delivered the best graduation speech that I ever heard, and he delivered it in five words. His “speech” was simply: “Just remember who you are.” When he finished that sentence, he looked out over the audience for some time apparently to let his message sink in. Then, he slowly made his way back to his chair and sat down.

So, to the Class of 2020, “just remember who you are.” To we adults who have seen the sacrifices that you have made during these most difficult times, who you are is a collective group of amazing teenagers who will never be forgotten.

Vows during a virus: Due to COVID-19, local couple scales down wedding plans

By Mandy Haggerson For the Clemmons Courier Emma Sullivan and William Heidtmann were engaged over a year ago. Like many... read more