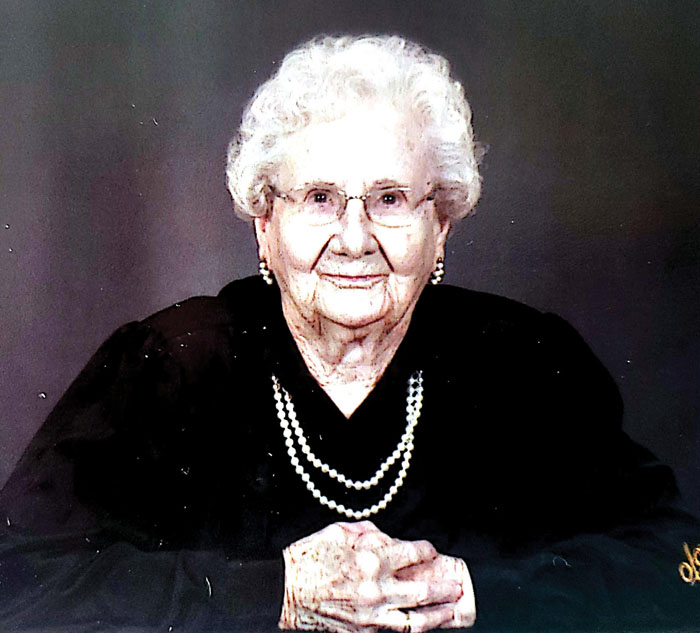 By Brian Pitts
For the Clemmons Courier

Her family had planned a celebration at Union United Methodist Church in Lewisville, but “we’re going to postpone it to give this (coronavirus) time to get by us,” McBride’s daughter, Kay Cumby, said.

McBride was born in Yadkin County and grew up there, graduating from Courtney High in 1937. There were 11 seniors in her class.

In 1945, she married William Arthur McBride, who passed away in 1974. Kate worked at Western Electric for nearly 30 years. William and Kate had three children, daughter Kay and twin boys. One of the boys, Hugh Allen McBride, is deceased. The other, Hubert William McBride, lives in Winston-Salem.

William and Kate lived a few years in Florida. “When my father passed away, she moved back to Forsyth County,” Cumby said. “She lived in Clemmons for 45 years. She moved to Yadkin County (in the Huntsville community) with me when she felt like she needed to be with somebody rather than alone at her age.”

Cumby added: “She also did volunteer work at the Forsyth Hospital for 30 years and did Meals on Wheels for 20-plus years.”

One of Kate’s hobbies used to be quilting. Nowadays “she loves to read, she loves the jumble puzzles in the paper and she does a lot of word search,” Cumby said.

Kate was asked the secret to living such a long life.

“The only thing I can say is I’ve always kept busy,” she said. “I volunteered until I was about 90, and then things began to happen to me.”