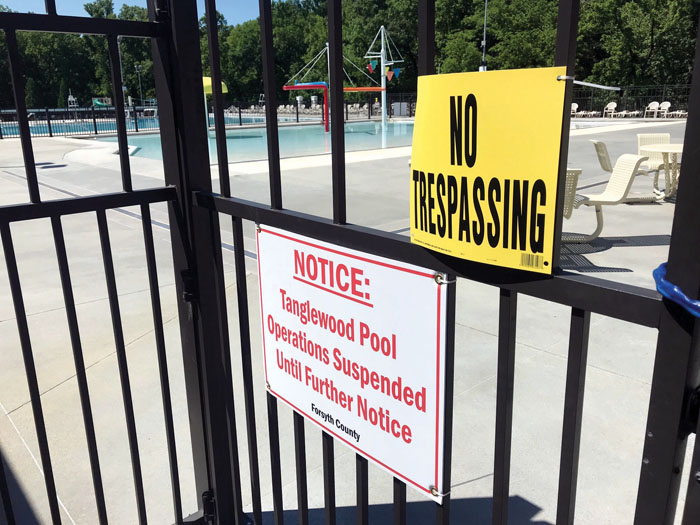 The pool at Tanglewood Park is currently closed due to the coronavirus pandemic. Photo by Jim Buice, for the Clemmons Courier. 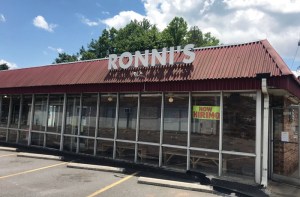 Ronni’s restaurant, on the northern end of Lewisville-Clemmons Road, is now able to open the dining room to 50% of its capacity with proper social distancing under Phase 2 of the reopening plan. Photo by Jim Buice, for the Clemmons Courier. 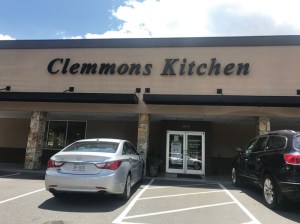 Clemmons Kitchen is now able to open the dining room to 50% of its capacity with proper social distancing under Phase 2 of the reopening plan. Photo by Jim Buice, for the Clemmons Courier.

School’s out — well, it’s been out for months — and it’s almost summer, which means it’s time to head to the local pool.

Or maybe not. At least that’s the case now with the Peter S. Brunstetter Aquatic Center at Tanglewood Park.

Brandi Chappell, marketing and events manager, said that “the Tanglewood pool operation has been suspended until further notice due to COVID-19.”

Under the Phase 2 guidelines of the governor’s state order that went into effect entering the Memorial Day weekend, pools are now allowed to operate at 50% capacity with proper social distancing.

However, as the calendar flipped over to June, signs around the massive aquatic center with a variety of amenities state, “Notice: Tanglewood Pool Operations Suspended Until Further Notice — Forsyth County.”

Most pools open in a typical year the weekend of Memorial Day or by June 1, but this year has been far from normal with the impact of the coronavirus pandemic.

When asked about the possibility of changes in the status, Chappell said that all the information she could provide was coming from the county manager’s office.

“We will be revaluating to see if we will open, but as of now it’s suspended,” she said.

Phase 2 is the second of a three-phased approach to reopening the state ordered by Gov. Roy Cooper. Besides pools, the second wave includes restaurants opening at 50% capacity and social distancing of six feet for dine-in customers; and personal care services, such as hair salons, opening at 50% capacity, proper social distancing and additional restrictions.

Restaurants were required to make a quick transition to takeout and delivery in the middle of March when dining in was suddenly halted under the first stay-at-home orders put into place to counter the spread of the novel coronavirus.

And although reopening dining rooms was celebrated by owners, workers and many patrons, there have been challenges for many restaurants with the 50% capacity and social distancing mandates eliminating more than half of the tables.

Ronni’s, a fixture on the northern end of Lewisville-Clemmons Road since 1982, operates in a relatively small space and had to remove 16 of its 24 tables to meet the new restrictions.

“We’ve always been known for takeout for the ballgames, the races, whatever, but when you lose your dining room, you’re losing over half of your business,” said Julie Brandon, the front manager for the restaurant. “We’d like to have all our tables back, but we don’t know what Phase 3 is bringing and if they’re going let us go wide open or keep the six-foot distance. If so, we’re still stuck with eight tables instead of 24. We’re a small building. We’re not like these big fancy restaurants.”

Brandon said that Ronni’s opened on Memorial Day and that business in the first week was just OK.

“A lot of people are still not coming out,” she said. “I can’t blame them. They’re scared. Takeout has been up and down, but people still get their food and take it home to eat it.”

Like all the other restaurants, Ronni’s had to make adjustments and regroup over the last couple of months “to try to maintain and keep our head above water,” according to Brandon. “We’ve been down in sales like everybody else. We lost about seven waitresses, but they could draw unemployment, and we had a few kitchen people go out.”

With the reopening of the dining room, even in a reduced capacity, Brandon said that the restaurant has brought back waitresses and is looking to hire some new kitchen help.

Brandon said she is appreciative of the many regulars who continued to come in for to-go orders and support the local business, and stressed Ronni’s will do its part to listen to the CDC and health department going forward.

“We play by the rules,” Brandon said. “I know in our restaurant we clean, sanitize and disinfect through all our shifts to make sure are customers are safe. That way, nobody gets sick, including one of us, because is one of us gets sick we’ll have to shut down.”

Anthony Slater, manager of Clemmons Kitchen — another longtime restaurant in the village — said that things have gotten “a little better every day” since being able to dine in again.

However, like Brandon, he thinks some of the patrons “are still a little scared” about eating inside a restaurant in the days of the coronavirus.

Slater said that Clemmons Kitchen, which opened for business in 1977, efficiently made the adjustments to reduce the capacity to 50% in the dining room.

Much of the staff has been brought back with the return of the dining room. Slater said that the two months of exclusive takeout were “slow but pretty good. It kept things going.”

Slater knows that it’s going to take a while for things to hopefully get back to normal.

“It’s going to take a little time though,” he said. “I know our customers are glad to be able to come back and sit down and eat.”

Unlike restaurants, which were at least able to stay open for takeout and delivery, hair salons have been totally shut down since the middle of March and have seen lots of business from customers past due for a trim and styling.

Great Clips on Lewisville-Clemmons Road reported having two-hour waits in its opening days. Other salons, while dealing with the new restrictions, were reporting brisk business with the doors open again.

Phase 2 runs through at least June 26 unless changed or canceled.

Although churches were allowed to reopen after a recent court order, bars, nightclubs, indoor fitness facilities, public playgrounds and indoor entertainment facilities, such as movie theaters and bowling alleys, remained closed after what Cooper called the continued increase in coronavirus cases and that “the potential spread of COVID-19 can be significant” in those locations.