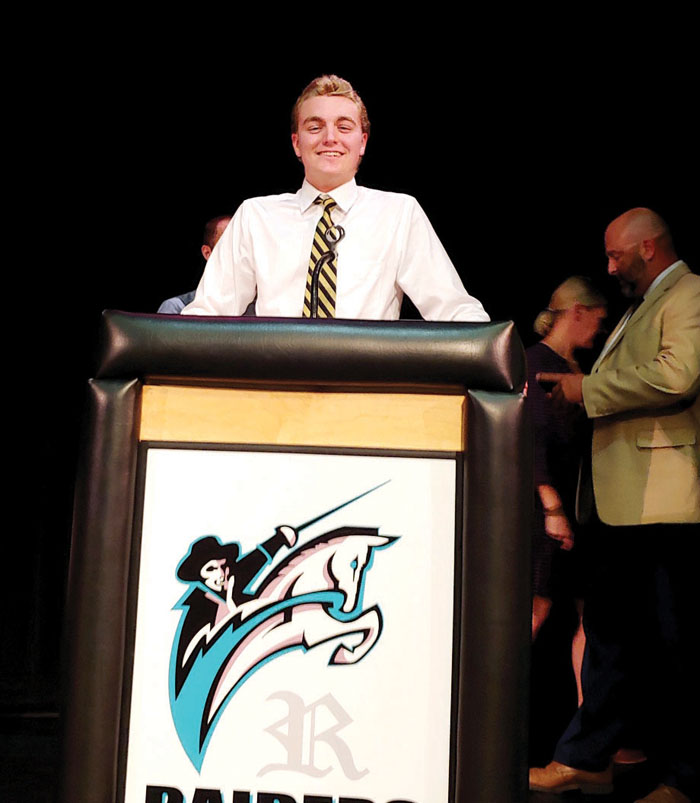 Simon Michel gets inducted into the National Honor Society at Reagan High School for the 2019/2020 school year.

Simon Michel learned from an early age that hard work yields success. The high school graduate of Ronald Wilson Reagan High School finished academically in the top of his class with athletic and leadership accomplishments. As Michel is about to embark on his next chapter, attending Washington and Lee University in the fall, he appreciates the foundation that has gotten him to this point.

One of the building blocks of that strong foundation has been swimming. “A big part of my life has been swimming,” notes Michel. “I remember being 6 years old and starting to participate in summer league. I loved the teamwork, the friendships, and the sport itself. As I got older, it became my principal source of exercise.” Michel wasn’t scared to embrace the distance events that can be intimidating such as the 200 and 500. “My favorite race has been the 500. It’s tough to get the pace right. You don’t want to start off too fast but you also don’t want to go too slow either,” explains Michel. “A memorable race that stands out was conference championships this past year. I hadn’t been hitting my target time in the 500. I knew that it would be my last meet with my entire Reagan swim team before regionals, and I wanted to make it my best. I felt my whole team behind me and beat my target goal by 5 seconds.” Michel’s hard work has been recognized. He was awarded the title of captain for this year’s Reagan Raiders’ swim team. He was honored as an all-conference swimmer in 2019 and 2020 for the Central Piedmont. He is also a four-year varsity letterman, four-time regional qualifier, and two-time state qualifier.

While Simon worked hard at his skills, his coach wore dual hats during that time. That is, Simon’s coach is also his father, Ryan Michel. “It was a highlight of my career to coach my son and spend valuable time with him that many parents miss out on during high school years. As a senior, Simon was a stellar captain and exceeded all of my expectations in the pool. The team will miss him next year, and I will miss my best friend.”

As a leader at his school athletically, Michel also attacked his rigorous academic pursuits. “Both of my parents are teachers, and academics are very important to them. My two favorite subjects are history, which my mom has heavily influenced my appreciation for, and chemistry, which my dad is passionate about it. They never were as much concerned about the grades as much as it was about comprehension of the course material I was studying,” notes Michel. “With history, my mom and I would delve into deep conversations on what I was learning, and the significance about learning from the past.” Michel’s commitment to his studies paid off as he was selected to be a junior marshal his junior year, an honor bestowed upon the top 30 students in the rising senior class. Michel was also recognized throughout his high school career as the AP world history student of the year (2016/2017) and Spanish 4 student of the year (2019/2020). He was inducted into the National Honor Society his senior year. Michel committed himself to academic clubs as the Latin Club president and the captain of the Latin Quiz Bowl team.

Michel felt that in both his academic and athletic settings he had been inspired by teachers and coaches who had given him so much. It made Michel want to give back to the community as well. Michel established the “Swim It Again” program at the Jerry Long YMCA. “The program collects goggles, swimming apparel, caps, equipment like kick boards and training swim fins for kids who might not be able to afford them. I didn’t want any swimmer to be disadvantaged because they didn’t have access to what they needed to participate in the YMCA programs,” reflects Michel. The program was started during his junior year at just one location, and has since been implemented by multiple YMCAs throughout the area.

Michel’s philanthropy appreciation isn’t just in the water. He has stocked shelves at the Clemmons Food Pantry for three of his summers. The mission of Clemmons Food Pantry to provide supplemental groceries to the residents of Forsyth County was important to Michel. “Giving back to my community that has given me so much is a priority of mine. I feel that it is the right thing to do,” says Michel.

This summer, Michel plans to also coach a swim team as an assistant coach at Bermuda Run Country Club. Although, due to COVID-19, the season won’t have official meets in the Greater Forsyth Swim League, swimmers still plan to practice several days a week. “I’m looking forward to gearing back up again for swim team season even if it’s slightly different. I’ve enjoyed helping coach since my freshman year of high school. So many people made my experience memorable, taught me the techniques of the sport, and I want to be able to do that for other swimmers. And hopefully one day, they’ll enjoy taking the sport to the high school level if they want to,” says Michel.

Our scholarly, philanthropic, and athletic neighbor has learned that nothing worth doing comes easy. Michel exemplifies that great things never come from staying within your comfort zones. He has demonstrated that if a person puts his or her priorities in the right place every day, then life should go, well, swimmingly.