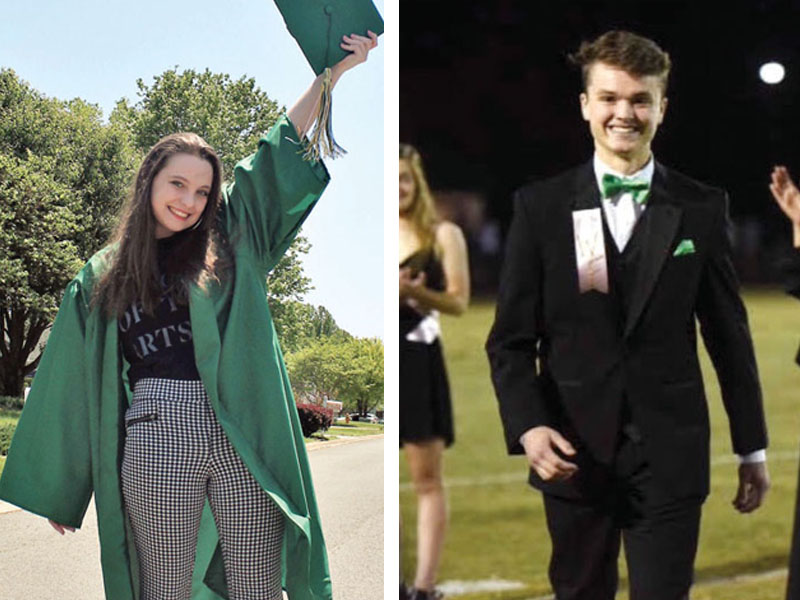 Sometimes, a story writes itself. Such is the case for this one. I have had the chance to interview two terrific teenagers to write it. They have passed along their impressive life stories to me, and I am passing them along to you.

Mary Louise Renegar and Ivy Daniels are two of the approximately 600 West Forsyth seniors who are graduating with the class of 2020. This is the graduating class that will forever be known as the one that did not finish their last year of high school in their classrooms but were instead doing their school work from home for the last three months of their senior year. During their careers at West, Renegar and Daniels were successful academically, they were leaders of their senior class, and they were greatly admired by their teachers and peers.

Renegar is a unique teenager who knew in the fourth grade where she wanted to attend college and the career path that she would take. In the spring of this year, the first of her goals was realized when she was accepted into the bachelor of fine arts program at the University of North Carolina School of the Arts. “I have lived in North Carolina all my life,” she said, “and I knew since the fourth grade that I wanted to attend UNCSA. Everything since then has been geared toward getting accepted there. I have been doing film making in various ways since I was very young.”

Her years as a HAG (Highly Academically Gifted) student at Hanes Middle School and several experiences working in theatre helped Renegar to put together a resumé that resulted in the fulfillment of her dream to gain acceptance to UNCSA where she will be majoring in film making. She recalled how working in theatre at West Forsyth gave her valuable experience to prepare her for her college major and a career in film. “I took technical theatre at West with my best friend Kylie. Although it was incredibly stressful at times, I was always excited to take an hour and a half a day out of my school day to build sets with her and my other friends.”

In addition to her experience in theatre, Renegar was active all four years in student government at West, and she was the student body president her senior year. When asked about her favorite high school memory she said that it is was giving tours to incoming freshmen as part of her role in student government. “My favorite West memories are probably the times I got to give tours to incoming students,” she said. “I’m very much a people-person, and I did find that West was one of the easiest things to talk about. My excitement for their time on campus was genuine, and I truly believe that high school is the perfect time to let go of the parts of you that allow you to grow.”

Like her friends who missed the end of their senior year, Renegar has had to deal with some difficult challenges while trying to learn some things about herself during the weeks that she has been at home rather than at school. “I think at first, I was struggling with where I was in life. I was thinking that all that I had worked for didn’t seem to matter to me. Then, I realized that it was a time to practice relaxing. Being in the HAG program in middle school and being so busy in high school, the mentality seemed to be that you are not being productive unless you are underwater with work. The time away from school has made me realize that it’s OK to not have to be productive all of the time.”

Laura Renegar is understandably a very proud mother of her talented daughter. “I am fiercely proud of Mary Louise, not just for what she has accomplished, but for who she has become. She welcomes and encourages others. She doesn’t shy away from tough issues. She is both compassionate to those who are hurting and fierce in the face of injustice. The world needs more of that.”

Regarding her daughter’s past experiences in film making and her prospects for the future, her father Scott had this comment: “Mary Louise has had many opportunities to stoke her interest in film, from camps as a kid to the UNCSA School of the Arts Summer Intensives to the Sarasota Film Festival. She has taken every opportunity to learn and grow and will do the same at UNCSA and no doubt eventually in Hollywood.”

For much of his time as a student at West Forsyth and especially during his senior year, Ivy Daniels was the face and energy behind much of the school spirit at West. The outgoing teenager opened the school day every morning with the daily announcements and followed them by signing off and saying, “It’s your boy, Iv.” This became a catch phrase at West, and he would be greeted with this throughout the day as he navigated the campus.

Regarding his participation on the tennis team, Daniels remarked that he stuck with the sport despite some struggles during his first year. “As a freshman, I was awful,” he said, “but I stayed with it. My sophomore year, I was the third seed, and by my senior year, I was a captain.”

Daniels looks back over his role as the leader of the FCA as giving him a chance to share his deep faith. “My time with that club showed Christ and my faith in him to other students,” he said. “It was the best club that I joined.”

While Daniels has good memories of playing tennis at West and his leadership role with FCA, he is most proud of leading the West Wackos, a large student cheering section at Friday night football games. He began filming the student section at several games and featured videos of the West Wackos on Instagram that resulted in more than 1,000 followers. This led to a contagious level of enthusiasm at West Forsyth on fall Friday evenings.

It was actually an away game against rival East Forsyth that is one of his fondest high school memories. “I arrived at the game at 5 o’clock to get ready for the arrival of the West students,” Daniels recalled. “By the time the game started, we had so many students in the bleachers, we were packed in like sardines.”

He also has good memories of Senior Night at a game on the West campus last fall. “It was crazy that night,” he said. “There was so much energy, and when the drum line performed during the third quarter, I got excited and jumped the railing and performed my own drum solo.”

His positive daily announcements and the energy that he brought to the campus as the leader of the West Wackos led to Daniels being selected homecoming king by his classmates. “That was one of the most surprising and heartwarming moments of my life,’ he said. The honor seems fitting given what he has contributed to West over his high school career.

Daniels found it difficult to not be in school during the last three months of his senior year due to the shutdown of schools brought on by the pandemic. “It has been difficult not being able to say goodbye,” he said. “I remember saying to the office staff that I would see them tomorrow the day before the shutdown, not realizing school would be cancelled for the rest of the year.”

He has maintained a remarkably positive outlook despite what has happened. “Life comes at us in different ways,” he remarked.” We should make the best of every hour, every minute. Everything happens for a reason.”

Daniels has lived up to his own words during the last three months while being away from school. He values the fact that he has gotten closer to his family and friends, and he has continued working at Pete’s Family Restaurant where he has been employed for the last few years. He has worked there as a cook and a server, and when dine-in service was suspended for a few months, he helped with take-out orders and curbside service.

He also made a video that aired on WXII a few weeks ago titled, “The Best Four Years of our Lives.” In the video, he offers a thank you to his teachers and his friends for what they have meant to him. At one point, he remarks that “I was born whenever it was 9/11, and now I’m ending my school year in a pandemic.” The video concludes with Daniels saying, “I just wanted to show that everybody is all right. Everybody is good.”

Like Renegar, Daniels will be studying film making in college. He will be attending Appalachian State University this fall.

Daniels’ mother and his grandmother offered their perspectives on what the Class of 2020 has experienced, and how this will prepare them for the future.

“They were born around 9/11, and they survived,” Marie Daniels, his mother, said. “They survived this untraditional year. They will be ready for the next chapter in their lives because they had to grow up faster. Titan strong!”

Carol Cross, Daniels’ grandmother, offered these thoughts: “My heart goes out to the grads of 2020. To the ones who did not get to finish their dreams, the games that weren’t played, the songs that weren’t sung, the prom that they did not get to attend. But, they will do well. They are the future.”

Those thoughts are the perfect sendoff to Mary Louise Renegar and Ivy Daniels. Good Luck to both of you and to all of the graduates of the Class of 2020!