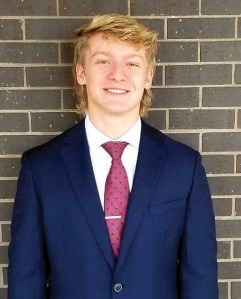 Catching up with … Levi Smith (lacrosse)

When you were growing up, what did you want to be? Archeologist

The biggest pet peeve I have is when: People repeating something they’ve said three-plus times already

If I could have one superpower, it would be: Breathe underwater

What’s the funniest moment in your sports career? Juwan Handy throwing a guy on the wing

What’s the proudest moment in your sports career? Scoring a goal to tie up Reynolds in the third quarter in the conference tournament

If you could turn back time and witness one event, what would it be? Michael Jordan’s last game with the Bulls

Who is the funniest teammate? Finley Teggart

Which teammate is happiest after a win? Deven Cooper

Hobbies: Fishing and my Jeep

Interesting fact about myself: I can play cello

What I like most about West Forsyth: Being able to walk outside to classes

If I could do one thing better, it would be: More outgoing

Person I’d most like to meet (dead or alive): Michael Jordan

If you could have a date with a celebrity, who would it be? Madelyn Cline

If you hit the lottery, what’s the first thing you’d do? Buy a boat