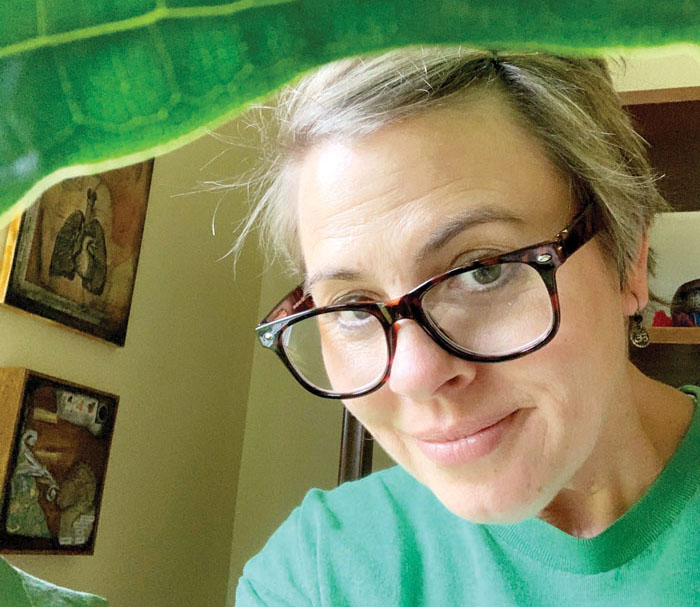 Leslie Newsome was born and raised in the Lewisville and Clemmons area. Newsome’s relationships from childhood would prove to be anchors in her life as an adult.

One of those relationships was Ashley Newsome, her now husband. “We first met when I was in fifth grade. We became close friends in high school, and went to prom and dated my junior and senior years. A year older than me in school, he even stayed behind to attend Forsyth Tech to be close to me,” recalls Newsome. Once Newsome graduated West Forsyth High School, she and Ashley took on their next adventure at the University of North Carolina at Charlotte (UNCC). Unfortunately Ashley’s mother became very ill with cancer, and he returned home to care for her as she was given a grim prognosis. “He never came back to Charlotte after his mom had passed away,” explains Newsome. After she graduated from UNCC with a bachelor’s degree in fine arts and minor in history, she went back home to regroup and figure out her next chapter. “I applied for schools and decided on getting my master’s in art at the University of Florida in Gainesville. They had some fantastic professors there that I respected. They also offered me a teaching stipend to help pay for my tuition,” reflects Newsome.

Newsome’s adventure in Gainesville proved to be insightful on many levels. Her second year of her three-year program she became engaged to Ashley. He had stayed behind in North Carolina while she was in school. “He had started working at Subway when he was 15. When I had gone to school he and his business partner, Jon Kite, had purchased their first Subway store,” notes Newsome. “When I finished school I moved back home, which I had sworn I would never do, just to be with Ashley.”

Ashley and Leslie were married in June of 2001. During those early years of marriage, Newsome taught art at UNCC and another local community college. “The commute was hard, so I finally stopped teaching, although I truly loved it. I felt it was a passion. Ashley and Jon were buying more Subway stores and I wanted to support the growing businesses and help out. They loved having stores in the community they lived in, and I wanted to help any way that I could. One of our stores was downtown on 3rd Street in Winston. We opened up a coffee shop right next to that store and I ran it for awhile,” explains Newsome.

Five years into their marriage Leslie and and Ashley received the news they were going to have a daughter, Elliot. “I stopped working at the coffee shop we had opened, and found a manager. I knew I wanted to stay home and be a full-time mom,” says Newsome. Being a mom to Elliot was so joyful; they added their son six and a half years later, Campbell. “When I look at my kids, I think what else is there,” reflects Newsome. “I feel very fortunate that we are able to have these businesses that allow me to be there for them so much. My world has centered around how to give them the best opportunities there are out there.”

The adoration that Newsome feels for her children she learned from her own parents, both of who have since passed away. “When my mom died this past year, it was really hard for me. I was able to look at her and tell her thank you for the life you have given me and the love that you gave me,” remembers Newsome. “But the journey of healing has been a process.” One way that Newsome has found strength in the power of healing is through art. “I had pondered using my art table and felt almost selfish since I knew there were millions of things that needed to be done throughout the day so it was in a back room collecting dust,” explains Newsome. “I had talked to Ashley about doing something again. One day I had come home and Ashley had taken it out of the back room, put it into one of the main rooms with lots of light. It was so metaphorical. It meant so much to me that he made that thoughtful gesture.” One thing leads to another for Newsome. The emotional journey of healing through art began. “When I reflect on the pieces I have done you can see the timeline narrative of how I’ve healed. It was a stark reminder of why and how art is so important for making a difference in the world.”

Newsome’s art collection has grown so extensively that she has displayed her work on her Instagram account (leslienewsomeart) to share it with others to see. “I’ve decided to enter art shows once COVID-19 isn’t impacting the world,” says Newsome. “Right now it’s tough because life is on pause, but I think I would enjoy showcasing my work and journey.”

Newsome’s evolved talents have given her restorative peace and joy. “For me it’s about the process. I have always loved activities like yoga and reading for that same reason,” explains Newsome. “It’s very meditative and I don’t have to have a purpose to just enjoy it. A quote by Michelle Obama that has always resonated with me is, ‘When we stand in the truth of who we are, we invite others to do the same.’ ”