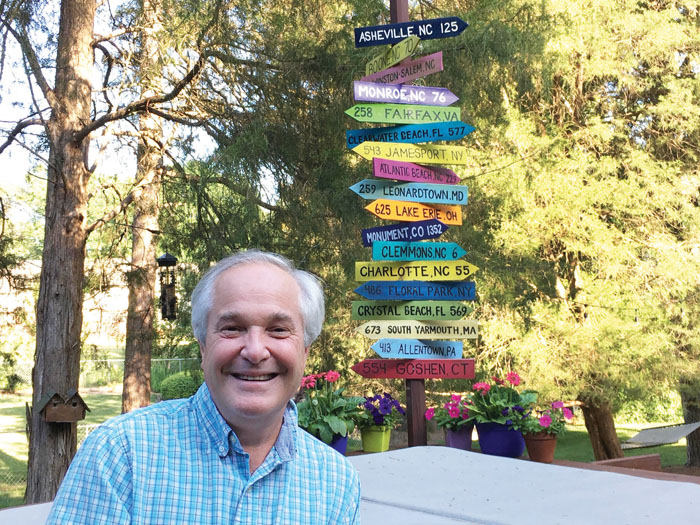 Henry Heidtmann found his passion for radio and broadcast early in life. “I remember loving radio growing up. I listened to it all the time and was enamored with the concept of it,” recalls Heidtmann. He also enjoyed living in a close-knit community in Long Island, New York. “My sisters and I would leave our house to go play with friends in the morning and come home in the evening when the dinner bell rang,” laughs Heidtmann.

It was one of those family friends that Heidtmann grew up with that had told him about Wake Forest University in Winston-Salem for college. “Initially I had considered pre-med. I discovered Wake had a program, that no longer exists, for speech, communication, theater and art. I immersed myself in it,” notes Heidtmann. He also found a campus band that felt like home. The self-taught saxophone, guitar, bass, and piano player found his talents were very appreciated by the group. “I always enjoyed playing music with friends. Beatlemania was on Broadway and we played a lot of their songs in churches and other venues.”

While Heidtmann was studying at Wake, he was a part of the Theta Chi fraternity that often did part time work for the school adjacent to the campus, Summit School. “A lot of the guys at Wake would work driving the buses over there. A particular roommate I had would often sleep in, and his boss would call our room looking for him. Finally I asked his boss if there were any other jobs available over there, and I was hired. It was supposed to be temporary, but I was drawn to the Summit community,” says Heidtmann. He worked at Summit part time his junior and senior years driving the buses for them.

As Heidtmann’s college years were coming to a close, he was reminded of the brevity of life when tragedy struck. “One of my buddies in our band had died from a car accident. It really was a big change in my life,” reflects Heidtmann. He decided he needed to chase his dreams of touring and doing studio work in Atlanta, Georgia. The learning experience taught Heidtmann a lot about the musical world with bands that he worked with like the Black Crows and R.E.M. “It was a tremendous learning experience for me,” explains Heidtmann.

Heidtmann took his experiences back to Winston where he established his own recording studio. For 11 years, Heidtmann enjoyed helping those with musical talents realize their dreams with his collaboration. Heidtmann was also building a future to his family. “I met Julie, my future wife, at a Wake football game and one thing led to another,” remembers Heidtmann. “Julie was also from up north and we had that in common among many other things.” Julie and Henry were married in 1990.

The newlywed was enjoying his studio, however, Summit School was in the back of his mind. Heidtmann was hired to inspire his passions for radio and communication with the students as the classroom technology specialist “In the later ’90s when the internet was fledgling, I was in charge of bringing it on campus to the students,” remarks Heidtmann. He also was impressed with the interest and dedication of the Summit students who participated in the Screaming Eagle Radio show that he implemented. “The students create an 18-minute internet-based radio show. It goes on a website and goes into archive. They bring in local and regional artists, talk about the weather, calendar, lunch menu for the day, and bring teachers in. It’s all them and it’s inspiring. They don’t do it for school credit. They do it before school starts. It’s kids as young as fifth grade through ninth grade,” explains Heidtmann. The program has been going for the past 10 years at Summit. “It’s so neat to see this childhood passion of mine, which I’m still impassioned about, inspiring new generations. It’s not going anywhere, I believe because of the simplicity of audio — it’s a way we can all use our voices.”

Heidtmann still leads by example by utilizing his talents and passions outside the classroom. He is still part of a ’60s tribute band called the GBs, which of course plays a lot of Beatles’ music. If not playing with the GBs, you might find Heidtmann and his friend, Kenny Shore, playing in the local area restaurants and wineries. Heidtmann also participates in the Forsyth Amateur Radio Club in Winston-Salem, even serving as the president for some time.

If Heidtmann isn’t creating and inspiring others, he also loves helping serve his community in other ways. Heidtmann assists his community as a deacon at Highland Presbyterian Church where he’s had to produce online services since COVID-19 struck. Heidtmann also was elected as the president of his neighborhood association, and volunteer at Willow Run pool. “I love giving back to the community that has given me so much,” reflects Heidtmann. “Julie and I have loved raising our three children (Henry IV, William, and Christina) here.”

Our neighbor who has spent a lifetime honing passions and appreciating his family knows that everything has worked out just as it was meant to. As John Lennon said, “There is nowhere you can be that isn’t where you’re meant to be.”