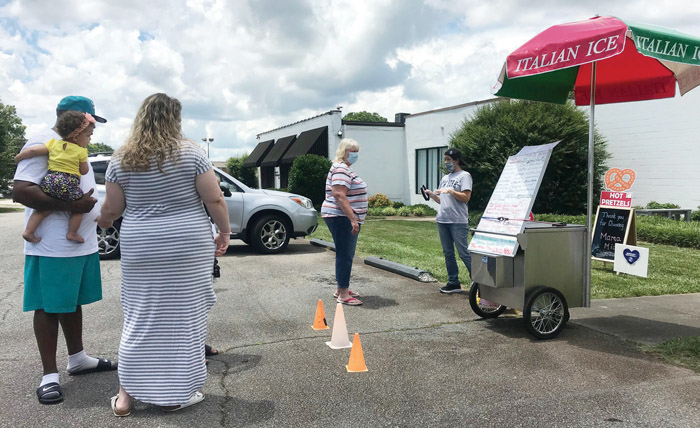 Kathleen Oliveri, right, talks with a customer while others wait at Mama Mia’s Italian Ice in Clemmons. Photo by Jim Buice, for the Clemmons Courier. 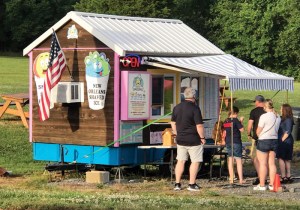 Ice cream at Cindy’s SnowCreamery. Photo by Jim Buice, for the Clemmons Courier.

With the arrival of summer, and all the accompanying heat and humidity, that also means it’s time for ice cream and other frozen treats.

There are plenty of choices in Clemmons — depending on your preference. Of course, ice cream has always been an established favorite wherever you go, but then there’s custard, Italian Ice and snowballs, among some of the most recent additions to the local business landscape.

“The country is divided a little bit in what types of frozen concoctions are found in different areas,” said Kim Goodin, who owns Cindy’s SnowCreamery along with his wife, Cindy. “Of course, ice cream is a universal treat across the entire country.”

Cindy’s SnowCreamery is in its third year operating out of a small trailer on the back side of the parking lot behind Carlton’s at the corner of U.S. 158 and Harper Road near Tanglewood and features what Goodin calls a local favorite — snow cream.

“It’s combining the shaved ice or snow business with a North Carolina favorite being snow cream,” Goodin explained. “I grew up all the time having snow cream in the winter time.

“People who are looking for ice cream when they come here and realize we don’t have ice cream usually are convinced that they ought try this because it tastes just like a homemade ice cream — tastes like you’ve sat on the porch for an hour turning that handle and churning out homemade ice cream. That’s the best way to describe what our vanilla snow cream tastes like.”

However, it’s just one of the 120 flavors offered on the menu, and once you start mixing flavors, there are thousands of options among the snowballs and snow creams. Some of the top choices include vanilla, dreamsicle (creamery orange) and peaches and cream — along with about everything else you can imagine.

So what’s the difference between a snow cone and Cindy’s snowball?

“The snow cone that you might get at a ballgame is a crunchier product, and it usually has syrup that has gone through the ice just like a soda will,” Goodin said. “Then you have what we do, which is a snowball where there is a (New Orleans) shaved ice to the point that it becomes a snow texture. It’s very fluffy, very soft in a way where the flavor stays throughout the product.”

And it’s very popular, based on the cars that frequently pack the parking lot and usual lines waiting to order. In fact, during the Phase I of the government restrictions, a complaint was filed against the business for not following the proper social distancing guidelines.

Goodin denies any wrongdoing, saying it was something they “had to overcome, even though we were doing it right in the first place.”

The transition has been made from Phase I, where customers had to take their sweet treats and leave the property, to Phase II when Cindy’s was able to put its picnic tables back out where people could enjoy their snowballs on site.

“It was pretty tough in Phase I, but we’re doing pretty good in Phase II,” Cindy Goodin said.

Just a few miles down the road on U.S. 158 adjacent to the library is another alternative to ice cream — Mama Mia’s Italian Ice, which is owned and operated by New York natives Nat and Kathleen Oliveri.

It is made in a machine like an ice-cream maker, but the ingredients are water, sugar and real fruit juice.

“It’s a whole fruit ice treat,” Kathleen Oliveri said. “It’s not syrup and water frozen. There are some pieces of fruit in it.”

Nat Oliveri said that there’s nothing quite like eating authentic Italian Ice.

“It’s different from a slushie or a snow cone,” he said. “It’s more a sorbet, more of a gourmet type.”

The Oliveris moved to the area from New York 11 years ago and opened their business three years ago. Nat gets his ice from his cousin in Queens, the Lemon Ice King, who is featured in the opening credits of the “King of Queens” television show.

“Frank Sinatra used to visit my cousin’s shop,” Oliveri said. “Normally it’s a weekly trip up to Queens to get ice from my cousin. I haven’t been able to go up to get my ice right now (because of the restrictions with the coronavirus), so I’m having a shipper bring it down. It’s costing me a little more, but I’m trying to keep everyone safe.”

Some of the favorite Italian ice choices from a full board of choices includes vanilla (which is the snow cream equivalent), lemon, peach and peanut butter.

“When I was a kid there were only two flavors — lemon and chocolate,” Oliveri said. “To this day, that’s all I eat. I sample the other stuff.”

The business is diversified with Italian Ice drawing 50% of the customers and the other half split among those buying bagels, hot pretzels, Italian bread and pizza kits.

With the state guidelines related to the pandemic, the Oliveris have continued to do curbside ordering and pickup in Phase II but look forward to allowing patrons to come inside soon.

“We want to be safe,” Nat Oliveri said. “We’ve been holding our own through this. The community has been supporting us, and we’re very thankful.”

A recent addition to the local mix is Abbott’s Frozen Custard, which opened late last summer in Clemmons Town Center — just off Lewisville-Clemmons Road in the Village Point area on the north side of I-40.

Jennifer Wall, one of the owners of Abbott’s, described the difference between custard and ice cream.

“Custard has a creamer and smoother texture,” she said. “It has eggs and butter fat in it. It’s slow churned in our machines here while ice cream is churned faster and has more ice in it.”

Wall said that chocolate almond and cookies and cream have emerged as favorites, but that black raspberry and all the peanut butters are very popular — along with the milk shakes.

The shift to the new Phase II guidelines in late May has helped with business as Abbott’s gains more exposure in its second year in a developing shopping center. Like Mama Mia’s, Abbott’s just did pints sales during the stricter quarantine of Phase I.

“It’s gotten better,” Wall said. “I think people are getting out more, and it helps we have the outdoor seating. It’s hard to tell how we’d do in a normal summer because we didn’t start until the end of August last year. Things are progressing week to week.”