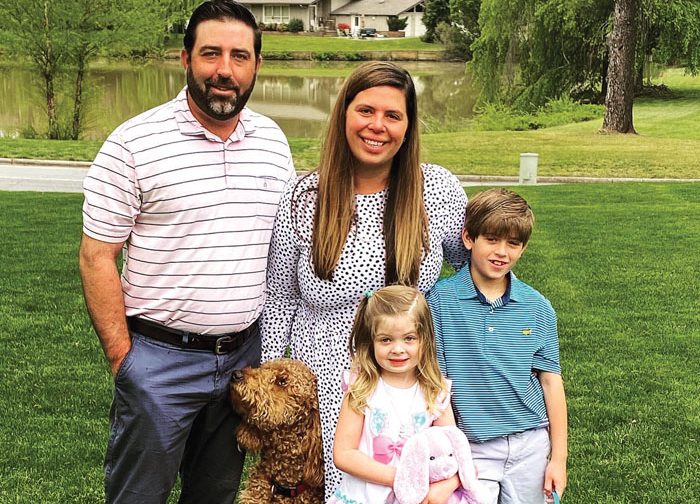 Carrie Hileman with her husband, Michael, son, Will, and daughter, Allie.

Carrie Hileman embraced the meaning of hard work from a young age. Growing up in Florence, S.C., Hileman was the daughter of a farmer. “He farmed 7,000 acres and I helped with picking vegetables,” notes Hileman. She helped her dad farm tobacco, cotton, corn, soybeans, wheat, and peanuts just to name a few.

As a way to spend down time together as a family, Hileman remembers vividly the fun her family had by going to the University of South Carolina (USC) football games as a kid. “Every home football game, we would drive our RV down. My dad was a state constable, so a state trooper vehicle drove the RV. As a kid, I thought that was so neat,” reflects Hileman. She was so dedicated even while attending boarding school at Darlington School in Rome, Georgia; she would bring home friends and roommates to partake in the Gamecock festivities. “I had a foreign exchange student come with me over Thanksgiving one year. I think she was shocked at the intensity of it all,” laughs Hileman.

Of course, when it came time to applying for college, Hileman had only one university in mind. “I only applied to one place, so I was glad that I got it there,” smiles Hileman. “I originally planned on picking a degree that would parlay into a job in hospitality. My mom was the executive director for South Carolina’s recreation and tourism, and thought that would be a good fit for me as well. I learned pretty quickly I didn’t want to work in restaurants and hotels on the weekend though,” explains Hileman. She graduated from USC in 2006 with degrees in psychology and business.

After graduating, Hileman headed to Coastal Carolina University to work as an academic adviser for a year. Hileman had realized she would do well by honing her interpersonal skills. “I enjoyed working with the freshman who had undeclared majors. It was a good learning experience,” says Hileman. She would also have another life-changing event, she met her future husband, Michael during that time. “He was attending the golf academy in Myrtle Beach,” explains Hileman. “He was down there because that program was helping prepare golfers to get on tour eventually.” After their initial meeting, the rest was history. “We went to a football game a month later. He took me to a N.C. State/Clemson game because he knew my intense allegiance to USC, this would ensure that I would cheer for the Wolfpack,” jokes Hileman.

Hileman enjoyed a courtship revolving around football before they finally were married in Pawley’s Island in 2007. “After we got married we decided we didn’t want to live at the beach long-term so we started looking for jobs. Michael found a job in Clemmons, so I began looking for one too,” explains Hileman. She has been in human resources ever since her move to North Carolina. She is currently the employment development manager for Sunrise Technologies. “What I love most is the opportunity it gives me to meet great people and make connections,” explains Hileman.

Once Michael and Carrie settled into their jobs in Clemmons, the expanded their family with children, Will (8) and Allie (6). “One of the things we noticed about being parents and talking with our friends is that we wanted more options in the Advance and Clemmons area for kid-friendly restaurants that adults liked too. So we sketched on a napkin a business plan with four other friends, and Tanglewood Pizza Company came into fruition. It’s been a great opportunity for us, and we’ve gotten such support and feedback from the community,” notes Hileman.

Although between being part owners of a successful restaurant for the past six years, her full-time job in human resources, and being a mom, Hileman enjoys the community in other ways. “I was a part of the Junior League for several years. It was such a great way to help in the community and meet other people, especially when we first moved to a brand new city,” says Hileman. She found that her new city had great resources too. “I’ve helped put on a football camp in Bermuda Run that has featured Chris Reynolds, the Davie High School quarterback who will be attending the University of North Carolina at Charlotte,” explains Hileman. “The kids in the community really enjoyed that.”

Hileman’s appreciation for hard work and pitching in is now shaping her own children’s experiences as they grow up in our community.