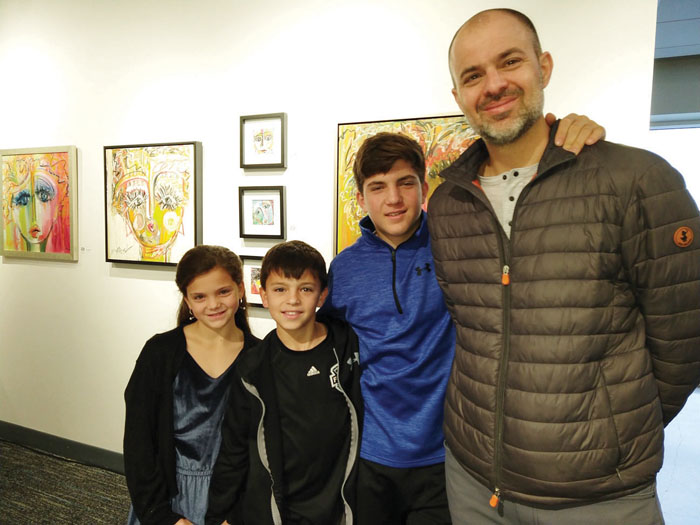 Dr. Scott Tonidandel with his children Celia, Simon and Oscar.

Dr. Scott Tonidandel grew up in a family where hard work paid off and competition was part of daily life. The middle child of three boys, Tonidandel lived in a suburb of Cleveland, Ohio. During Tonidandel’s childhood, there was a conveniently located premier figure skating center equipped with Olympians and best of the best trainers. “My mother had been a national judge, so we were exposed to the sport early on in life,” remembers Tonidandel. It was no surprise given the athleticism that ran in the family that Tonidandel gave figure skating a try as well. Tonidandel did so well at figure skating by his junior year of high school he was third in the country. His commitment to figure skating was so rigorous that he was schooled by a program provided by the U.S. Department of Education in between his figure skating training sessions. “The norm was to wake up and train for 5-6 hours, and then start school at 11 a.m. until 3 p.m. Then I would head off to play tennis after school got out,” recalls Tonidandel.

Tonidandel’s passion for tennis extended past his high school years. Tonidandel was undefeated throughout his entire high school career in tennis. When it came time for choosing college, his older sibling cracked the code of where was a good fit. “My older brother chose to go to Davidson College to play. We were drawn there because of the academics and it was also Division I for tennis,” notes Tonidandel. He played all four years while at Davidson College. Tonidandel enjoyed the academic side of Davidson College. He studied industrial-organizational psychology and simultaneously immersed himself in economic classes. “I had the opportunity to study at the London School of Economics and Political Science during the summer so it didn’t interfere with tennis,” says Tonidandel.

While playing tennis and managing his academics at Davidson, he also managed to meet his future wife, Ashley. “We first met on Nov. 19, 1993,” recalls Tonidandel without hesitation. “We’ve been together ever since. Although, she too played tennis, we actually met through mutual friends. She was 10 times the tennis player I was though with lots of conference awards on her belt despite multiple ACL tears,” explains Tonidandel.

After Scott and Ashley graduated from Davidson College they headed to Texas. Ashley planned to attend Baylor College of Medicine, and Scott wanted to get his M.A. and Ph.D. in industrial-organizational psychology at Rice University in Houston. “I enjoyed that side of psychology because it was the blending of economics too,” says Tonidandel of his five-year program.

After Ashley graduated from medical school, the now-married couple headed back to North Carolina. “Ashley’s family was from N.C., and some of the top anesthesia programs she was considering was in the state. I started teaching at Davidson in the psychology department in the fall of 2002,” explains Tonidandel.

Both Ashley and Scott decided after establishing their careers it was time that their family expand. Their eldest child, Oscar, was born in 2005, son Simon in 2007, and Celia in 2009. They quickly adapted to the “new normal” of life. “Once Oscar was born, I coached soccer in the fall, basketball in the winter, spring soccer, and put that on repeat for several years. Then when the second child was born it doubled, and so on,” jokes Tonidandel. Although Tonidandel did less of the coaching, as the kids gradually got older and advanced to more competitive leagues, he is still very involved with taking them to their practices all over the state. “We have a room in our house called the soccer room. We play a game we call 3 games to 5 where we rotate different partners. The room doesn’t have furniture so we can play it. Luckily we haven’t broken any windows. We have put some holes in the plaster board,” laughs Tonidandel. “The kids have gotten so controlled with their possession of the ball they keep it down.”

Aside from taking the kids to their practices, meets, games, and competitions, Tonidandel has taken on a new role professionally. “I left Davidson two years ago, and now work as a professor of management at the Belk College of Business at the University of North Carolina at Charlotte (UNCC),” says Tonidandel. He also is a faculty member of the Organizational Science Ph.D. program at UNCC. “I really like it although it was a big change for me. A lot of my work involves data and computer science, and artificial intelligence learning. UNCC is really positioned well to do that. They just started the first data science program in N.C.,” notes Tonidandel.

One thing is for certain about our neighbor who is a natural trailblazer; Tonidandel has never shied away from the work it takes to accomplish his goals.