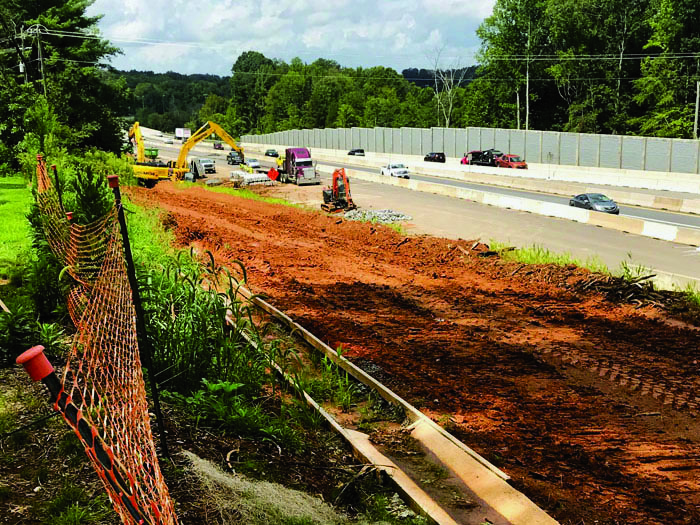 Photo by Jim Buice While work on I-40 from Harper Road in Clemmons to N.C. 801 in Bermuda Run continues at a frantic pace, including the road, bridge and noise walls, the Lewisville-Clemmons Road improvements project remains on hold.

Meanwhile, I-40 widening from Clemmons to Bermuda Run rolls on

While construction is in full swing on the I-40 widening project heading west from Clemmons toward the Yadkin River and Bermuda Run, the long-anticipated Lewisville-Clemmons Road improvements project remains stuck in neutral.

It’s been nearly two years since the Clemmons Village Council allocated all 100 Transportation Advisory Committee points to what was named Project U-6004, which was added to the new State Transportation Improvement Program’s list.

And it’s still sitting there, with snags starting last September when all preconstruction activities on this project and others throughout the state were put on hold by unforeseen budget issues created by the impact of recovery efforts from Hurricanes Florence and Michael, rockslides, snowstorms and isolated flash floods as well as settlement expenses related to Map Act cases.

While Pat Ivey, the longtime engineer for Division 9, was hopeful that NCDOT was starting to work through some of the fiscal challenges, along came the coronavirus pandemic in March to stall any forward movement for projects that weren’t already under construction.

“Obviously with the pandemic, DOT has seen significant revenue reductions with projects being put on hold, and we’re trying to work through the reprogramming process now based on revenue that we believe we can have,” Ivey said. “Projects currently under construction are not impacted by this. So pretty much everything else is going to be delayed. We will not know for a few months what the new schedule will look like, but it’s pretty much of a guarantee that any project including Lewisville-Clemmons Road is going to be delayed.”

None of this comes as a surprise to Village Manager Scott Buffkin, who was aware of the significant budget issues late last year and then along came COVID-19 this spring.

“We had talked with DOT about getting together again before all this happened,” Buffkin said, “but since then, they pretty much had told us if we had entered into a local project, it may be a while. At this point, I don’t see this happening any time real soon given DOT’s financial status.”

Trying to figure out the best fix for Lewisville-Clemmons Road from I-40 to U.S. 158 has been a focal point for years, and it seemed like the approval of the project by the council in September 2018 would trigger the start of improvements for the busy stretch of road, including the interchange.

The decision to allocate the points for the project culminated a long process that started nearly a year earlier when the mayor (John Wait) and three council members (Michelle Barson, Scott Binkley and P.J. Lofland) were elected largely on a “no median” platform. They were then faced with addressing the dangerous stretch of Lewisville-Clemmons Road — including many twists and turns before the NCDOT ultimately recommended that a median be placed from I-40 to Stadium Drive, which is only 20% of the entire corridor.

Ivey said that all the preliminary findings showed the shorter median for the busiest part of the road to be the best option. The council constantly pushed NCDOT for more options and alternatives and wanted to be assured it would be heard as the process continued with Lofland and Chris Wrights appointed as delegates from the council to work with NCDOT.

There were a couple of informal meetings earlier in 2019 before NCDOT’s budget problems surfaced in the fall. Binkley was then appointed as the new delegate to team up with Wrights in working with NCDOT after Lofland lost out in her bid for re-election in the November election.

In the meantime, Ivey said last year that the interchange at I-40 needed to become a priority in the overall process and even introduced the idea of diverging-diamond interchange as one to consider to help with the capacity problems, particularly during rush hour.

So after focusing on the medians — and where to put them and where not to put them — followed by considering what the interchange is going to look like, it’s now just a question of when the project will get restarted.

Meanwhile, the I-40 widening project from Harper Road to N.C. 801 to six lanes, including the westbound and eastbound bridges and putting up noise walls on both sides of the highway, enters the stretch drive.

“The project is a little more than 70% complete and should be finished by the end of the year,” Ivey said.