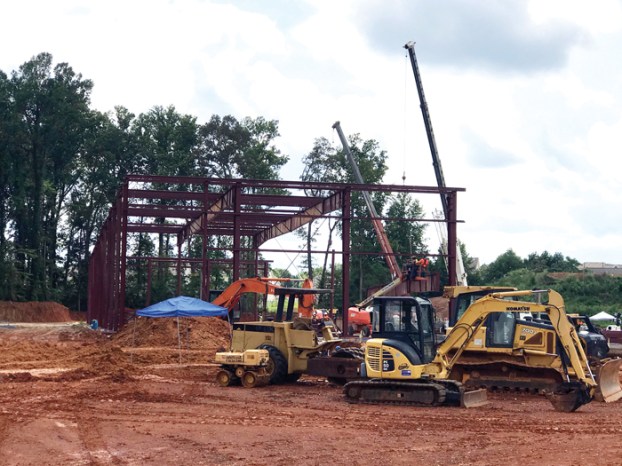 Construction is underway for the new RISE Athletic Performance Center in Bermuda Run. Photo by Jim Buice, for the Clemmons Courier.

Rising up: Multi-sports complex under construction in Bermuda Run with anticipated opening date of June 2021

When Mayor Rick Cross was running down a list of positive developments in the Town of Bermuda Run in last Tuesday night’s meeting, he led off with RISE Indoor — the massive multi-sports complex that is under construction on the hill above the Sports Park.

“There’s a lot of energy around town, and we’ve got the RISE Athletic Performance Center that’s going up,” Cross said. “The footings are being put in, and the steel is going up.”

Actually, this project has been on the books since 2017 when the ownership group for Carolina Athletic Performance bought 22 acres from Twin City Youth Sports and announced plans for a 120,000 square-foot indoor athletic center — which was considered to be one of the largest of its kind in the eastern United States. The property is located at the end of Twins Way east of Kinderton Village and west of the Sports Park.

But it didn’t happen right away. 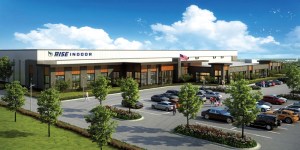 “This is close to a $14 million project, and it required the right investment group to be involved and the proper funding to be in place,” said Neil Cornatzer, development partner, “and after some time, we were able to do that and put together the right team of folks.”

That includes Lane Newsome, the general manager who has run AAU and USA Volleyball events and served as manager of the Greensboro Sportsplex for over seven years. “He has a lot of knowledge and experience,” Cornatzer said.

Then there’s Adam and Jessica Barber, who started the original project and are partners along with Jason Tutterow, who is the main principal behind the development itself. The Barbers operate Torque Performance and Fitness, which offers sports specific training to athletes and will continue to do so in the new facility.

“Not everybody’s doing these kind of things, and it takes a vision,” Cornatzer said. “We were able to show what we have programmed for the facility and commitment for the facility — first, tournaments, and second, club teams and recreation teams will be practicing in here on a daily basis, and it will be set up for larger tournament events on the weekends.”

Of course, there’s also the collaboration with NC Fusion and their neighbors at the Sports Park.

“We’re working with them and meeting their demands for indoor space and training for some of their athletes,” Cornatzer said. “They have 250,000 people that come through there a year that can be utilizing our facility for fitness and dining. We did a feasibility study that supported the facility need in the region and anticipated north of $8 million in year one in local economic development/impact.”

Cornatzer said that in 2019 the site was cleared and grading was done before “we officially started to ramp up” in late June this year and now putting up steel for the building frame as part of the “48-week process” by general contractor Landmark Builders to hopefully open the facility by June 1, 2021.

Highlights of the facility include:

• Restaurant and concessions on site

• Over $1 million in onsite technology

• Live streaming from all court and field surfaces

“On the stats sheet, we’ll have a lot of basketball and volleyball,” Cornatzer said, “and we’ll have pickleball, which is the fastest growing sport in the nation. We’re currently working to have sports medicine and an orthopedic group. And along with all the cardio and fitness areas, we’ll have some dining options and concessions, such as serving smoothies and prepared foods, and hot foods on the weekends.”

Cornatzer said that the goal is to offer something for everyone from youth and clubs from elementary school through college along with sports and programs for adults and seniors.

“This is a very unique facility, and we’re thrilled to be here,” Cornatzer said. “We’ve seen the demand and understanding what that is. Being next to the Sports Park and the NC Fusion relationship, we really do have one of the largest sporting hubs in the Southeast for sure.”

Also in last Tuesday night’s meeting, in his comments, Cross said, he spent some time with Scott Wollaston at the Sports Park, saying, “There are things going on over there. They’re starting to get some people back. 801 Southern Kitchen is open and staying busy, and there’s a new hair salon, The Cutting Edge, that’s opening up, Maddie’s (bakery) is expanding, and McDonalds is getting a facelift.

“Just to me, in these days when there’s so much concern about what’s going on, and rightfully so, I look around the Town of Bermuda Run, and we have a number of positive things going on.”

In the only action item on the agenda, the council approved a resolution to adopt an updated version of the Northern Piedmont Regional Hazard Mitigation Plan. The initial plan was developed in 2014.

By Betsy Ramsbotham For the Clemmons Courier Picnics are on the list of favorite summer activities. When COVID-19 safety precautions... read more