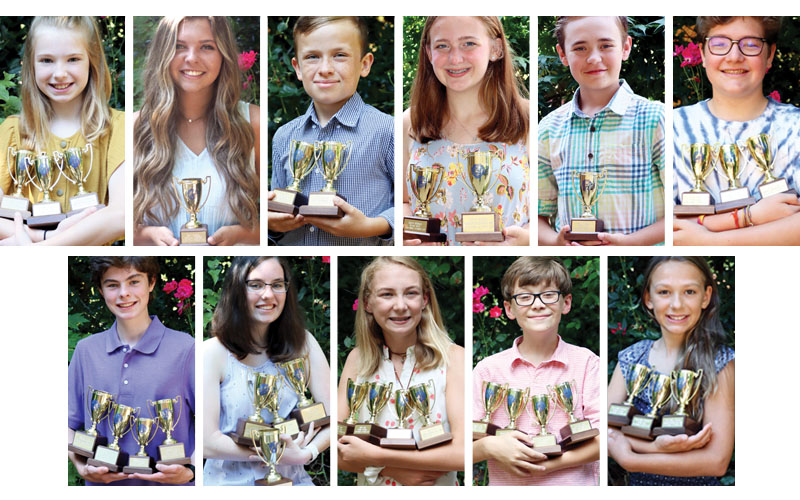 Students from Advance and Clemmons earned their National Federation of Music Clubs gold cups at the 2020 NFMC Junior Music Festival held on the campus of Wake Forest. North Carolina holds 13 area NFMC Junior Festival music competitions around the state each year with more than 4,000 students competing annually. They are sponsored by the National Federation of Music Clubs (NFMC) and are designed to give musicians of all levels and abilities the opportunity to perform and receive yearly evaluations in a non-competitive environment. Participation in the NFMC festivals promotes music study, stimulates interest in the musical literature of both the U.S. and the world, and encourages each student to reach a high standard of musical achievement. Their NFMC festival gold cup program is nationally recognized and honors outstanding and excellent musicianship skills in all areas of music. Gold cups are earned in three-year increments if a student earns a score of superior for each of the three years.

Since their founding in 1898, NFMC has become the largest nonprofit organization in America to promote and support American music, performers and music education. They are chartered by the Congress of the United States, and are the only music organization that holds membership in the United Nations. NFMC provides opportunities for musical study, performance and appreciation to more than 135,000 senior, student and junior members in 6,500 music-related clubs and organizations nationwide. Among its member are professional and amateur musicians, vocalists, composers, dancers, performing artists, arts and music educators, music students, music patrons and benefactors, and music lovers of all ages. Through their junior festival program, with more than 117,000 participants nationwide, they offer more than $750,000 in state and national scholarships.

The following students earned their NFMC festival gold cups for 2020 at the NFMC Junior Festival held on the campus of Wake Forest University:

Mallory Andrews is a rising fifth-grade student at Shady Grove Elementary. Her parents are Adam and Allison Andrews of Advance. Andrews has earned her NFMC festival gold cups in the events of hymn playing, American patriotic/folk songs and piano solo. These first-level cups represent three years of scoring superior in each of these events. She is on track to earn her 15-point cups in the events of musicianship and piano duet in 2021. Andrews’ 2020 entry into the NFMC annual “Poetry in Music” event also placed in the top five entries for the 14 states included in the southeastern U.S.  Andrews loves dancing and has been taking dance since she was 3 at In Motion Dance Studio. She loves spending time with friends and family. She wants to be a veterinarian when she gets older because she loves animals. She is a member of Clemmons Methodist Church.

Samuel Boulos, (not pictured) whose parents are Kamil and Joelle Boulos of Advance, earned his first four NFMC festival gold cups after three perfect years of a score of superior in piano solo, piano duet, hymns and American patriotic/folk songs. He attends Salem Baptist Christian School in Winston-Salem where he is in the sixth grade. He is a member of Friendly Arabic Church and enjoys playing drums and being with his family.

Ryan Madison Fussell earned her first NFMC gold cup in the vocal musical theatre event this year, and is on track to earn gold cups in the events of vocal art song, vocal American patriotic/folk song and theory/musicianship during her upcoming senior year. Her musical theatre competition music included “I Feel Pretty” from Westside Story and “Feed the Birds” from Mary Poppins. Fussell is a senior at Davie High School and sings with the Davie High Show Choir and Vocal Ensemble. She is a member of Pinedale Christian Church and is the daughter of Matt and Alison Fussell of Advance. Fussell plans to attend UNCC in the fall of 2021.

Jaxon Gardner is a resident of Clemmons and the son of Ryan and Tiffany Gardner. He is an incoming middle schooler this year starting sixth grade and attends Clemmons Presbyterian Church. Gardner has participated in the Wake Forest NFMC Junior Festival for the past three years in the piano events of American patriotic/folk songs and hymn playing and has earned his 15-point gold cups in both of these events. He is on track to earn his gold cups in the events of piano solo and theory/musicianship in 2021. Gardner loves playing and watching anything about baseball, basketball and football. He also loves to go trout fishing with his dad in the mountains, as well as reading, swimming and running. This summer he ran the entire Salem Lake trail.

Will Hedrick is the son of David and Kathy Hedrick of Davie County. He is an eighth grader at North Davie Middle School and is a member of Clemmons Presbyterian Church. Hedrick enjoys baseball, riding bikes, exploring with friends, playing in the band, ringing with the Middler Chimes and being in the youth group at CPC. Hedrick earned his 2020 gold cup in piano duet with his sister, Holyn, as his duet partner. Their competition music included two contemporary arrangements: “Switcheroo Boogie” and “Crystal Lake.” Hedrick has previously earned three NFMC Festival gold cups in his piano events and is on track to earn his theory/musicianship gold cup in 2021.

Holyn Hedrick is a sophomore attending Davie High School. She earned her NFMC festival gold cups for 2020 as a 15-point cup in the piano duet event, and a 30-point cup in the piano event of American patriotic/folk songs. Her 30-point cup represents six consecutive years of scoring superior in this event. She is a member of Clemmons Presbyterian Church where she sings with the youth choir and has rung for two years with the Middler Chimes.  She enjoys being in the band at Davie High, crafts, reading, participating in the CPC youth program and is in the STEM Honors program at school. A favorite past-time is being with friends. Hedrick has previously won three NFMC Festival gold cups for her excellence in piano.

Sean Lane is an eighth-grade student at Ellis Middle School and is a member of River Oaks Church. He plays with the WEMS tennis team and enjoys volunteer work as a WEMS Civitan. His creative arts interest include music and photography. Lane is the son of John and Jackie Lane of Advance and he has been a three-year member and participant of the NFMC. Lane earned his festival gold cups in piano American patriotic/folk songs, hymn playing and piano solo, representing a consecutive score of superior for each of the past three years. His hymn playing selections included two traditional hymns:  “Just As I Am” and “All Hail the Power of Jesus’ Name.” Lane is on track to earn his theory/musicianship gold cup in 2021.

Jeffrey Lyons is the son of Michael and Karen Lyons of Clemmons. Lyons attends West Forsyth High School where he is a sophomore. His 2020 NFMC awards include a 15-point gold cup in piano concerto, 30-point cup in piano solo, 30-point cup in hymns and a 30-point cup in American patriotic/folk songs in piano. He has been a member of NFMC for six years and his 30-point cups reflect a score of superior in each event for each of the six years.  Lyons plays tennis on the West Forsyth tennis team and enjoys biking.  He is an active member of Clemmons Presbyterian Church and the youth choir.  He also regularly provides service music for the worship services. Lyons hopes to study and pursue a career in environmental science.

Natalie Lyons is a senior at West Forsyth High School and plays percussion in the West Forsyth Wind Ensemble. She is an active member of Clemmons Presbyterian Church and enjoys participating in the youth group and the youth retreats. She will be attending college in the fall of 2021 and plans to pursue a major in either forensic anthropology or biology. She is the daughter of Michael and Karen Lyons of Clemmons. Her NFMC Festival gold cups for 2020 include 30-point cup piano solo, 30-point cup hymn playing, 30-point cup American patriotic/folk songs and a 30-point cup in piano duet. All four of Lyons’s awards represent six years of scoring a superior in each event. Some of her favorite activities include reading and listening to music.

Abby Ross is the daughter of Matt and Lauren Ross and a member of Hillsdale United Methodist Church. After receiving the highest score of superior in each of her NFMC events, Ross earned her festival gold cups in piano solo, piano duet, American patriotic/folk song and hymn playing. She is on track to earn her gold cups in 2021 in vocal art song and vocal musical theatre. Ross has excelled in her musical efforts this past year, singing the lead role in “Annie” at Ellis Middle School, as well as winning the NFMC “Music – A Magic Carpet Ride” essay contest for the state of North Carolina.

Parker Ross is a sixth-grader entering middle school. He earned his NFMC gold cup in the piano duet event with his sister, Abby, with both having received a score of superior for the third year in a row. Ross also earned gold cups in the events of piano solo, American patriotic/folk songs and hymn playing. He is on track to earn his theory/musicianship gold cup in 2021. He is the son of Matt and Lauren Ross and a member of Hillsdale United Methodist Church.

Giulianna Steuart has earned three NFMC Festival gold cups for 2020. Her events include hymn playing, piano American patriotic/folk songs and piano solo. She is a duet partner with Mallory Andrews and together they will both earn their piano duet gold cup in 2021. Beside piano, Steuart loves swimming, basketball, volleyball, reading, drawing and playing with friends. She is a member of St. Timothy’s Episcopal Church in Winston-Salem and is the daughter of Michael and Kristen Steuart of Advance. Steuart has also earned the music studio award of “personal best memory” for the past three years. She is on track to earn her NFMC gold cup in theory/musicianship in 2021.

The above listed 12 students are members of the music studio of Teresia Ann Queen, local piano and voice teacher, recently named again as having the No. 1 ranked federated music studio in the state of North Carolina by the NFMC. This is indeed a high honor from within a national organization that has over 135,000 members across the U.S. The studio is a junior club which participates annually in the NFMC Junior Music Festival. Although many other factors contributed to this honor, the participation and success of her students at Wake Forest was the largest contributing factor to the state and national ranking for Queen’s studio.

Other students who contributed to the state and national ranking (but who are in the middle of gold cup years and not pictured here) include Eli and Katelynn Beadle, Elaina and Samuel Boulos, Aaron Clodfelter, Jed Flippin, Layla Hazlip, Anna Hedrick, Daniel Hennessey, Garrison Hewitt, Beckett Lunde, Leela and Tyler Moore, Kristen Roberts, Marion Shelton, Landon Vick, E.J. and Arabella Yaroszewski  Each student is to be congratulated for all they have accomplished, shared and contributed to this statewide recognition as well as their own individual perfect scores and awards.