Same neck of the woods: Father and his two children find careers at Egger 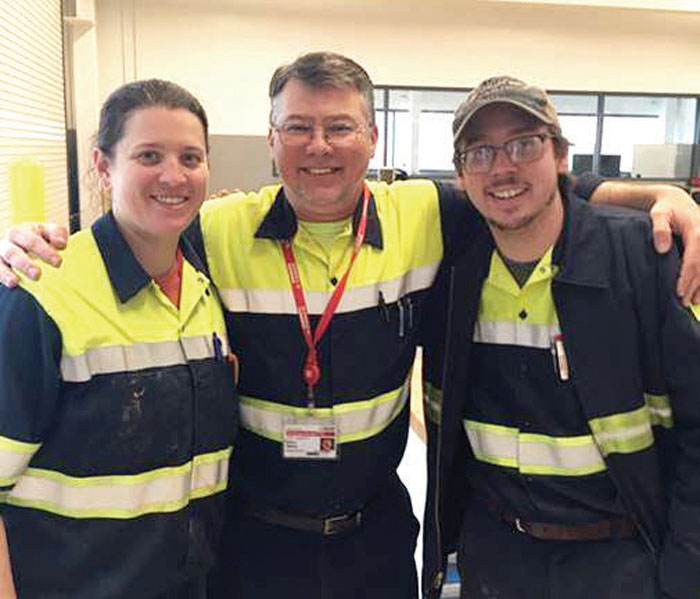 It has been said that a family that works together…well, that’s not quite the way it goes, but in the case of three members of a Clemmons family, there is some truth to the fact that there is close bond between a father and his son and his daughter who all work at the same place.

Darrell feels intrinsically rewarded in his role training about twenty individuals in the Egger apprenticeship program that is now in its third year. He develops his trainees to become specialists in either an electrical or mechanical track. They are enrolled in a four-year program that includes both hands-on training on the job as well as classroom learning that leads to an associate’s degree and two journeymen certificates. They receive a full scholarship during the apprenticeship program.

It has been especially satisfying and rewarding for Darrell to have his son Dylan among those who he is training. “I absolutely love it,” he said when asked about what it is like to be training his own son. “It is much more relaxing than you might think, and it has brought us closer.” He  joked that Dylan chose the electrical program rather than the mechanics program “just to spite me” noting that his specialty area is mechanical.

Dylan remarked that being trained by his father has resulted in a newfound respect between the two of them. “My job is interesting,” he said, “and it’s been nice for my dad to have the chance to watch me grow while I am learning it.”

He also commented on the appreciation that he has for his working environment at Egger. “They give you time to be creative and to use your own knowledge and to build things from scratch,” he said.

Samantha’s work situation is quite unique as she trained for three days in England to become a press operator, but her machine is still being developed.   Until the machine is running, she has been doing core drilling and cleaning. Darrell is proud of her for her work ethic and her commitment to her job.  “She’s a go-getter,” he said of his daughter. “She runs circles around all of us.”

All three members of the Dixon family are grateful for the opportunity to work for Egger, as they consider it to be a dynamic company. Founded in 1961 in Tyrol, Austria, the company manufactures wood-based solutions for the furniture and interior design, building and flooring industries. After considering 50 locations, Lexington was chosen in 2017 to be the first site for a plant in North America and the 20th worldwide. It sits on more than 200 acres. A three-phase building program is in place with plans to invest $700 million and eventually employ 770 individuals.

Darrell is especially impressed with the commitment that Egger offers to its employees on a personal level. “I like the interest that they put on personal development,” he said. In his position as an apprenticeship trainer, he has seen the value of his role in working with trainees as they continue to develop their craft and specific skills.

Dylan enjoys the working environment and the opportunity to work with individuals from other countries. “Working with people from other cultures is intriguing,” he remarked. “Since this is the first plant that the company has built in America, there are individuals working here from Austria, Spain, France and some other countries. It is like a melting pot here, and it is part of the daily routine to work with people from various parts of the world.”

Samantha has similar feelings about the positive influence of various cultures in her work environment. “The openness and the honesty from the European side allows us to have the chance to learn so many things,” she said. “I have been impressed by how everyone in the company is focused and pays great attention to detail.”

It is sometimes recommended that family members should not share the same work setting, but it is obvious that Darrell enjoys working in the same place as his grown children, and that all three of them enjoy their jobs and get a great deal of satisfaction from the work that they do.