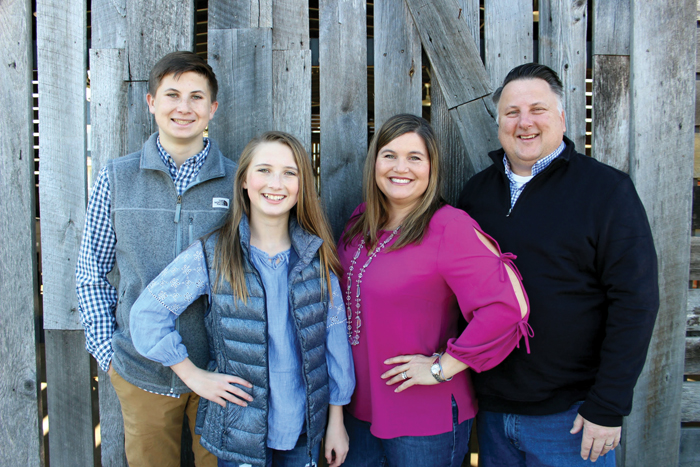 Susie Stamey spent her early years in Underhill Vermont. “I’ve always told my siblings that I was the real Vermonter,” jokes Stamey. “Both my older brother and sister were born in New Jersey before my parents moved. I loved the active life style we were encouraged to have living in Vermont as kids.”

Although Stamey and her siblings were all encouraged to be active kids, they learned at an early age that they had muscular dystrophy. “I learned at the age of 12 that I had it. I realized that I couldn’t run quite as fast, and if I tried to I would fall down,” explains Stamey. “Although my siblings had it, my case was pretty severe.” Stamey’s muscles degenerating didn’t stop her from building a love for cross-country and downhill skiing. “In the winter, we were skiing, and in the summer we would hike, bike and play softball,” recalls Stamey. “For my high school team I was still able to play tennis despite the muscular dystrophy.”

“The muscular dystrophy played the biggest challenge in my running,” says Stamey. “It motivated me to want to become a medical technologist so I could actually cure it.” Stamey headed to West Virginia University to begin pursuing her dream. “Other family friends that I knew were heading to West Virginia. My parents had said I needed to go somewhere that family could get to me if I needed it. We had family in Pittsburgh. It made sense and I was able to expand my wings safely,” explains Stamey. “I completed all of my pre-requisites in two years. At the end of my sophomore year I learned that there was a three-year wait for my program that would take me 2½ years to complete. I didn’t know what I would do if I had to sit around and wait, so I went back home.”

Stamey had the courage to try many types of jobs in both high school and college. “I had worked as a sledding hill attendant, front desk clerk, in the season pass sales department, camp counselor, and even had a job skiing in a mouse costume. I wasn’t scared to try anything new. I just wasn’t sure what that would be,” notes Stamey.

Stamey knew she needed to move closer to her family. “If you don’t have an income, you know your only option is to move home with you parents. I began work at Rack Room Shoes in Winston-Salem,” mentions Stamey. Her parents had since left Vermont and set up roots in a much warmer climate. “Honestly at the end of the day, I’m so glad that I didn’t end up living in a laboratory as a medical technologist. I don’t think it would have made me too happy.”

Stamey had worked with several temp agencies to secure other jobs. “I was hired to do underwriting by the Republic Mortgage Insurance Company,” says Stamey who worked with the regional managers. “This opportunity allowed me to work at First Union for awhile as well. Around this time, I met my future husband, Phillip,” smiles Stamey. “We were both busy people and took advantage of the online dating tools that were emerging at that time. Although, initially I didn’t think I was ready for a relationship so I made him pursue me a little bit. He even had to convince me to move back to Winston from Charlotte to be closer to him. It worked though.”

Susie and Phillip were married in 2001 after being together a little over a year. Stamey was working in product development for Aon until she and Phillip decided to expand their family with their oldest, Daniel, in 2004. “I really wanted to stay home with my kids when they were born,” reflects Stamey. “I took care of other friends’ kids Monday-Thursday. It was nice; he always had someone to play with. On Fridays, a group of moms from church would get together for a morning out group at each others’ homes.” Stamey enjoyed her new role as mom and they had daughter, Emma, in 2007.

Having children and establishing a sense of community has been important to Stamey. “Although, I was raised Catholic, we began attending the River Oaks Community Church since the year it first opened in 1998,” says Stamey, the current youth leader for middle and high school kids. “It’s incredibly rewarding helping these young ladies on their faith journey. This will be my fifth year.”

Stamey has also enjoyed living in a tight-knit neighborhood community of Clemmons West. “I’ve run the Clemmons West children’s sale for the past 13 years. This was a great resource to me when my kids were younger. It was actually started in the ’70s by a group of women in someone’s basement as a co-op. It’s pretty neat to see how it’s evolved and expanded. It’s quite the feat to get it running and a great benefit to families that can repurpose a lot of items,” explains Stamey. Her role within her neighborhood also included being the president of the pool board. “Our kids loved doing swim team there, and spent much time free time there. I enjoyed the role for two years.”

Stamey’s also resumed another hobby of rescuing animals during COVID-19. “I had always been an animal person. When Phillip asked me to get married, I had four cats. He had only one dog. He had a lot to consider when we first got together with all my fur babies. We’ve had many animals come into our lives because they didn’t have anywhere else to go. Fostering during COVID-19 has been so rewarding. I’d encourage everyone to do it,” notes Stamey, who’s fostered for both the Forsyth and Davie humane societies when needed. “During this time, we also like to get out and golf as a family. Both Daniel and Emma play golf for their schools at West Forsyth and Meadowlark. It’s a nice way for us to spend time together.”

“Although one thing I wish we were able to do soon is travel. I love to travel. If I could encourage young and healthy people to stop putting off today what you want to do, like traveling, I would. Don’t wait. Live it. As my muscular dystrophy affects me from knee down since it’s a stark reminder of why that’s so important,” explains Stamey.

Our neighbor’s reminder of the importance of taking risks and trying new things sums up how she has lived her journey. “I believe God has different stepping stones for you if you pay attention. Life is happening now. So live it.”