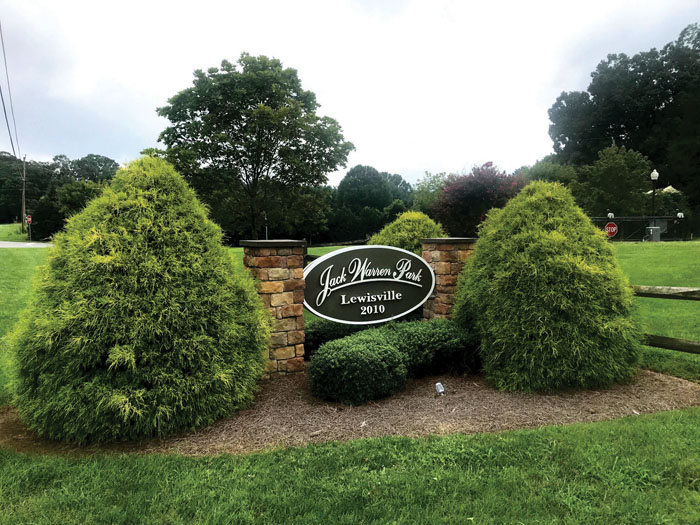 Jim Buice photo Lewisville received a donation of 15 acres of land in the middle of town years ago from Mary Alice Warren that became Jack Warren Park, which opened in 2010. And now, Warren’s gift of the other 15 acres adjacent to that location will be the site of Lewisville’s new community center, which will be named Mary Alice Warren Community Center and is scheduled to open in September 2021.

While the Town of Lewisville moved forward in its regular August monthly meeting with plans for a groundbreaking for its new community center and a scheduled completion by this time next year, the only remaining question was a name for the facility.

But really there was only one choice, as Mayor Mike Horn articulated in making his motion to name it Mary Alice Warren Community Center, which was unanimously approved with words of admiration from council members.

“Years ago, the town received a very generous donation of land by Mary Alice Warren in the name of her husband Jack Warren,” said Horn, who is in his fourth term as mayor and was presiding at the Aug. 13 meeting. “That land of approximately 15 acres became Jack Warren Park. We started talking about a community center and had a number of locations in mind, but truly in the back of our minds there was only one place where this community center could go, and it would be most appropriate. Mary Alice Warren came forward and said, ‘You know I’ve got another 15 acres that’s adjacent to Jack Warren Park. Would you like that for the community center?

“We certainly didn’t hesitate to accept that offer. It’s rare that you have 30 acres of absolute pristine prime real estate in the center of any community that’s donated to the town. So council members, what I would like to ask for your approval tonight is that we officially name our new community center Mary Alice Warren Community Center.”

The council approved a series of motions to provide the funding for the project, including approving amending the Capital Project Ordinance Community Center in the amount of $4,094,725 and amending the Budget Ordinance in the amount of $997,788 to transfer funds from the Municipal Buildings/Land Capital Reserve to the Community Center Capital Project to fund completion of the new community center construction. 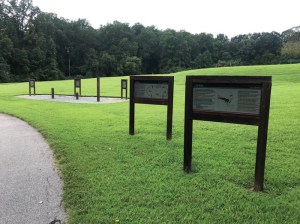 Jim Buice photo
Lewisville received a donation of 15 acres of land in the middle of town years ago from Mary Alice Warren that became Jack Warren Park, which opened in 2010. And now, Warren’s gift of the other 15 acres adjacent to that location will be the site of Lewisville’s new community center, which will be named Mary Alice Warren Community Center and is scheduled to open in September 2021.

The Community Center Capital Projects Fund was established last year with financing from the Town’s Municipal Buildings/Land Capital Reserve Fund, installment financing and transfers from the General Fund as necessary.

Town Manager Hank Perkins then proposed awarding the construction contract to Fairwood Construction LLC from Charlotte in the amount of $3,688,218, which includes construction contingency funds, with a time-frame notice to proceed and complete the project in a 365-day window from when notice was given.

It was also approved unanimously, meaning the 12,000-square foot Mary Alice Warren Community Center, which will include an entry area, meeting area, activity area, multipurpose area and kitchen area, is projected to be completed by September 2021. It will be right next door to Jack Warren Park where Warren’s family donated the land for that park, which was built in 2010.

“Folks, we’re off and running,” said Horn, who announced the groundbreaking for the project is scheduled for Saturday, Sept. 12. “This is exciting. Excuse me for a moment if I get a little choked up on this. This has been a long time in the works.”

Council members expressed their appreciation to Warren in their comments with Dr. Kenneth Sadler stating in his approval of the motion, “Yes, with a debt of gratitude from the citizens of Lewisville for your generosity.”

Councilman Fred Franklin called Warren “the biggest benefactor to our town,” and councilwoman Jane Welch offered her thanks, adding, “talk about contributing to her community, it’s a joy to know this woman and express immense gratitude.”

From her perspective as probably the youngest member of the council, Melissa Hunt said: “It’s going to be something that will be impacting generations for years to come — my children and then my children’s children.”

Horn said that this project was a vision of the council and will serve as a wonderful addition to town facilities that will bring people together.

“You’ve heard me say on numerous occasions that in order to build community, you’ve got to have places for the community to get together such as what we’ve done with Shallowford Square, what we’ve done with Jack Warren Park,” Horn said. “The community center continues to allow us for opportunities to come together and get to know each other, and also to maintain that sense of what makes Lewisville a special place.”

New Clemmons resident has lived a rich life of…