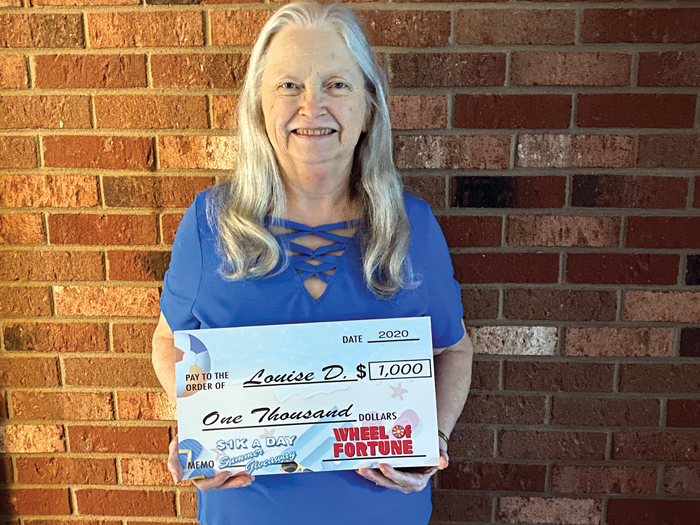 Louise Davis with her $1,000 check that she won from the Wheel of Fortune contest.

Louise Davis, who resides in northern Davidson County, has watched the syndicated game show Wheel of Fortune for decades. Her loyalty to the show paid off when she was a big winner recently after entering the show’s Summer Sweepstakes contest. Winning contestants are awarded $1,000, and the show also awards $1,000 to the local food pantry where the winning contestant resides. Davis received her check on Monday, Aug. 24, and the Clemmons Food Pantry has also received the money designated to them as the local pantry representing where Davis lives.

“I have been watching the Wheel of Fortune since Chuck Woolery was the host,” Davis said. “That’s how far back I go with the show,” she continued, indicating that she has been a loyal viewer for many years. She is a member of the Wheel Watcher’s club, and she won the Summer Sweepstakes contest by first entering the contest online. When her name was selected, she had to correctly identify the answer to the puzzle that the winning contestant attempts to solve at the end of the show.

When Davis was notified that she had won the contest with a phone call from the administrators of the puzzle, she had to complete some paperwork that verified that she was not associated with the show or the producers of the show in any capacity. When that process was completed, she became an official winner.

When asked if this was the first time that she had won anything of significance, Davis responded that she had once won carpet for a room in her house and later granite countertops for her kitchen in prior contests. She does not yet have definite plans for her winnings from the Wheel of Fortune contest, but she is considering applying the money toward some new living room furniture. Davis has certainly been a successful contest player as she has been able to use her winnings to upgrade her house on several occasions.

Although she is grateful for the considerable amount of money that she won for herself from the Wheel of Fortune contest, Davis is even more pleased that $1,000 has also been given to the Clemmons Food Pantry. “I am more excited about the food pantry getting their check that I am about me getting my check,” she said.

Steve Eller is the current secretary of the board of directors for the Clemmons Food Pantry and a past board president. He said that the check the pantry has received from the Wheel of Fortune contest is much appreciated. “The pantry is grateful to receive $1,000 during such an uncertain time in our country,” he said. “We have been fortunate to have great community support, but things can change so to receive this money is amazing, especially as we run our current operations and are getting closer to opening our new building.”

Eller indicated that the pantry is still serving clients during the pandemic and that specific needs include dry pasta, canned fruits and cereal although all food contributions are appreciated.

Davis expressed a soft spot for those who are in need of food during these challenging times, and she is especially concerned about the number of children who often have to go without food.

“I’m just thrilled that a food pantry received the money that they did from the contest,” she said. “So many people need food right now, and I’m so glad that this money can be used to purchase food for them.”