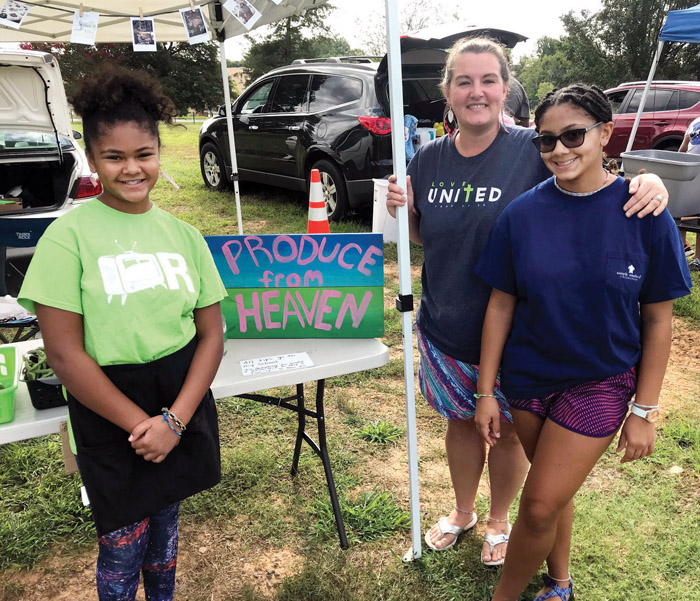 At age 10, Nevaeh (which is Heaven spelled backwards) Chamblee, left, operates Produce from Heaven after taking on a small garden this spring as a science project. She is a regular at the Clemmons Farmers Market. She poses with her mom, Jessica, and 14-year-old sister Lucy. Photo by Jim Buice, for the Clemmons Courier.

In addition to all the wonderful produce, goodies and other items at the Clemmons Farmers Market, everybody has a story.

Just take a walk around the semicircle on the lot that is part of the Jerry Long Family YMCA property, and you’ll see and hear a little bit of everything.

That includes the tale of a 10-year-old “farmer” — yes, the age is no typo — from Clemmons who operates Produce from Heaven. Her name is Nevaeh (which is Heaven spelled backwards) Chamblee. She got into this new business at such a young age after taking on a small garden at as a science project while being homeschooled with help from her mom. That was the result of regular school getting shut down in March because of the coronavirus pandemic.

“I love it,” she said with a big smile while tending to her stand on a surprisingly refreshing Saturday morning of the Labor Day weekend. “This is the first time I’ve done any gardening. I like to see things grow, and I get to learn things I’ve never known. And it’s very peaceful.”

“I grew everything from seeds,” said Nevaeh, who is in the fifth grade at Salem Baptist Christian School and has a jar on her table stating that all donations go to her school to support a scholarship to help a family.

Although the garden is starting to dwindle this time of year, she has learned a lot and produced a bountiful crop in her first year, including a tomato plant up to 7 feet tall, foot-long cucumbers and one watermelon that weighed in at 29 pounds.

Her mom, Jessica, said that Nevaeh has been a regular at the market since paying the vendor fee earlier this summer — coming as soon as she had five zucchini and a few other items.

“She has sold out every time except for once,” said Jessica, who added that the business name came after a brainstorm session. “I told her to use something with your name. She said, ‘like I’m doing produce.’ I was like, ‘do something with produce and your name.’ We got a Gmail account and a Facebook page for her business.”

Her 14-year-old sister also has her own business, “Creations by Lucy,” but instead of produce she does handmade crafts, specializing in earrings, bracelets and the like. Lucy was set up at a table on the other side of Nevaeh under the tent Saturday and also has a Facebook page. She ships all across the state and from Mississippi to Massachusetts.

Both sisters have dreams of working for NASA when they grow up (Lucy actually said she’d like to be an astronaut), but Nevaeh also has thoughts of being a dentist and a gardener.

“I want to keep on doing it,” Nevaeh said of her passion of digging in the dirt.

Her mom added with a laugh, “She wants to be a dentist so she can fund her gardening and maybe buy some land.”

If you haven’t been to the Clemmons Farmers Market this summer, come check it out on a Saturday morning before it closes down for the year on Oct. 10.

There’s something there for everyone, including plenty of interesting stories like Produce from Heaven and many others.

Mike Horn, who is serving in his fourth term as the mayor of Lewisville, admittedly was choked up during the town’s August meeting when it was announced that everything was moving forward with the plans for the long-anticipated community center.

Unanimous and overwhelming approval was given to name the facility after Mary Alice Warren, who donated the 15 acres in the prime location adjacent to downtown — just as she did more than a decade ago for the same amount of land in the tract next door that became a park named for her husband Jack Warren.

So on the day of the virtual meeting, Horn said he spoke with her, knowing what was on the agenda.

“At 99 years old, I talked to her this afternoon,” Horn said during the meeting. “She asked if anything interesting was happening at the council meeting tonight, and I said, ‘no, not much Mary Alice, but I encourage you to at least tune in.’ Mary Alice, I know you are watching and once again please know from our council what a special person you are and our appreciation is extended to you.”

Certainly, it was a no-brainer for the council to name the new 12,000-square foot community center in her honor. The timetable calls for the completion of the $4.5-million facility by this time next year. The official groundbreaking is scheduled for Saturday at 10 a.m. at Jack Warren Park.