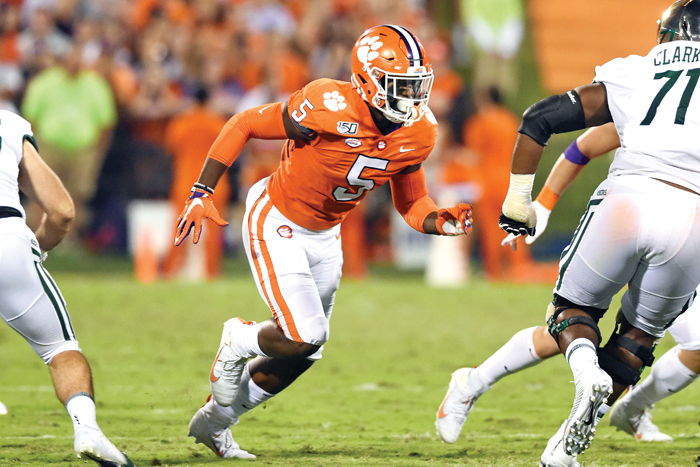 Clemson's K.J. Henry runs a play during the first half against UNC-Charlotte on Sept. 21, 2019, in Clemson, S.C. (AP Photo/Richard Shiro)

K.J. Henry, a mega-recruit out of West Forsyth in 2018, redshirted at Clemson as a freshman and was a bit player in 2019.

But the 6-4, 255-pound defensive end has the potential to be an essential piece for the Tigers as a redshirt sophomore in 2020.

“I love it,” Henry recently told Sports Illustrated. “The culture speaks for itself. It’s so cliche, because as a recruit you think there is no way it’s still like that. That is the talk to all high school football players, that it won’t be that way when you get there. But that is exactly how it is when you get here. There are great guys, great competitors and great athletes, and above all are some great men. So, overall, it’s just been great.”

Henry was a football/basketball star for the Titans. As a football senior in 2017, he was rated the No. 6 player in the nation by ESPN, No. 14 by 247Sports, No. 26 by Rivals and No. 27 by PrepStars. He was the No. 2 player in North Carolina by Rivals. He was named a second-team All-American by USA Today, and he played in the Under Armour All-American Game.

Henry, though, had to pay his dues when he joined the powerhouse Tigers. As a freshman in 2018, he got 39 snaps in four games and was credited with nine tackles (two for losses) and a fumble recovery before redshirting. He made his college debut with one tackle and the fumble recovery in 13 snaps against Furman. He registered five tackles, including two for losses, while playing near his hometown at Wake Forest.

Henry played a backup role as a redshirt freshman in 2019. In 15 games, or 350 snaps, he tallied 22 tackles (4.5 for losses), two sacks and three pass breakups. He had a sack against Georgia Tech, a half-sack and a pass breakup at Syracuse and broke up two passes against Charlotte. He had three tackles, including a half-sack, against Boston College, three tackles against N.C. State and shared a tackle for loss against Wake. In the ACC Championship Game against No. 22 Virginia, he had two tackles as Clemson clobbered the Cavs 62-17.

“I’d say I grew the most confidence-wise from last year,” he told SI. “Obviously it is a week-to-week thing. If I don’t have confidence in myself then I won’t make any plays. Going through last season from beginning to end, my confidence grew and my teammates had more confidence in me and that helped me play a lot better, too. I think my confidence affects how you play and how fast you play.” 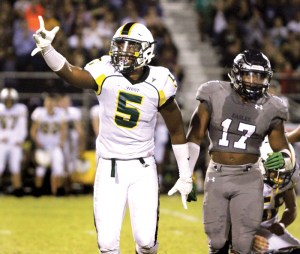 As Henry approaches his redshirt sophomore season, he seems gracious and humble — and hungry to play a big role. He has become a leader on and off the field, having made the ACC Honor Roll last year.

“I feel like I’ve grown in ways, trying to find myself,” he said. “Just do the best I can be, as influential as I can be in my time here and being able to use the platform as much as I can, as it’s not here forever. At the same time I know you know God put me on this earth to give His message and ways that I could do it in a positive light, and so I’ve just been able to grow that through P.A.W. Journey, my position group, really just the culture here. I’ve been able to grow my all-around self, so it’s been great off the field just as it has on it.”

Making it all the better, Henry is a part of an incredible program. The Tigers won 29 of 30 games in 2018-19. They own two national championships in four years, they’ve played in four of the last five national title games and they’ve rung up nine straight 10-win seasons under coach Dabo Swinney.
In the ACC, it’s most likely going to be Clemson and everyone else again in 2020. Most people already have Clemson penciled in the College Football Playoff (it has played in the last five CFPs).

Henry is relishing his leadership role in 2020.

And then: “I enjoy the leadership role that I have. Anyone that knows me knows that I’m always talking. I feel like that I’ve been a leader ever since I was young, but I wasn’t necessarily as vocal my first couple of years. I’m very confident now with it being my third year.”