Shifting chefs: Local chefs who were put out of work by the pandemic have taken different paths, including being regulars at the Clemmons Farmers Market 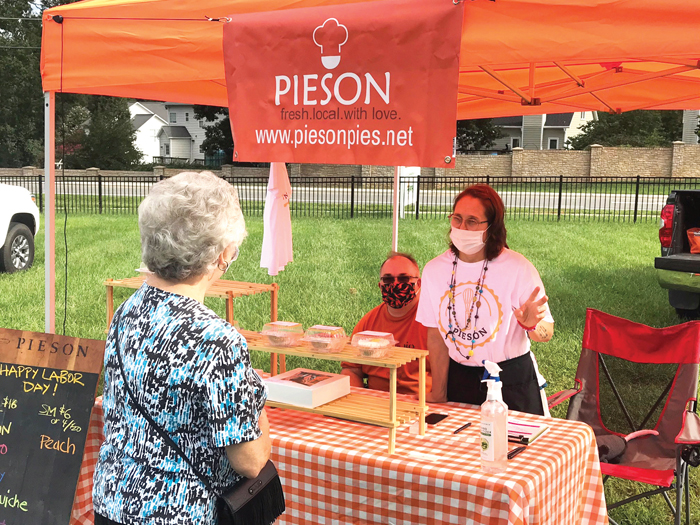 After losing their jobs as a result of the coronavirus pandemic in March, John Bouley, a longtime executive banquet chef, and his wife, Marcie, decided to start a new business, Pieson, where they sell pies. They have a booth every Saturday at the Clemmons Farmers Market. Photo by Jim Buice, for the Clemmons Courier.

John Bouley and John Ingino are local chefs who share the same first name and a similar journey. They were both put out of work by the coronavirus pandemic in March and have been forced to reinvent themselves to make a living while figuring out a new path going forward.

You can find them on Saturday mornings at the Clemmons Farmers Market — Bouley selling pies through his new business, Pieson, and Ingino unloading produce from a farm he had started on the side three years ago as a hobby. Now he is co-owner of Patterson Farms & Nursery.

Actually, another addition at the market, Produce from Heaven, was created by a 10-year-old girl this spring, also as a result of the pandemic when schools were shut down. The young owner turned a science project through being homeschooled into a garden — and a ultimately a business where she sells the items she has grown from seed (see story, page 2).

But back to the chefs…

Bouley was executive banquet chef at the Benton Convention Center, which includes the Marriott and Embassy Suites in downtown Winston-Salem, when he lost his job after the government shutdown.

“As many people as we’ve got, I knew it was not going to happen as far as going back to work any time soon,” John said. “We’re talking second quarter of next year before they’re going to reopen, if that. I had to come up with some plan.”

Meanwhile, his wife Marcie, who had her own massage therapy business for 21 years, also was forced to close by the restrictions. So, what to do?

“And she’s like, my client said do pies,” John said.

“We were both put out of work the week of March 25,” said Marcie, who recalled that conversation with her friend. “We stayed home that week, and she called and asked what we were going to do. I said I have no idea, and she said with John’s skills, if he wanted to make something to eat, I would buy it and tell my neighbors to buy if that would help. He said I can make a really good tomato pie, and we started the next week playing around with it. I like the idea of delivering pies. Everybody loves pies.”

So Pieson, a variation of Paesan (Italian for “friend”) as a tribute to those who have supported their venture, became a reality.

They then stated looking for a place to do the pies and discovered Canvas Cake Studio in Winston-Salem where they have been able to share the kitchen with a baker who had gone into business about a year ago and makes wedding cakes but was suddenly getting lots of cancellations due to the pandemic.

“We’ve experimented,” Marcie said of the pie menu. “We do savory and sweet, which I think is also a draw.”

John said that the “biggie” has been the tomato pie, and they now have three variations, including Italian. The best-selling fruit pie is the blueberry pie. Lemon pie has been a new popular addition.

Besides the Clemmons Farmers Market, Pieson does pies for individuals and businesses.

“I deliver, and he is the chef,” said Marcie, who was able to return to her job as a massage therapist after being closed for eight weeks when the governor’s order went into effect. “I am back working in my practice, and we tag team everything. We have picked up commercial accounts, which has really helped. Clemmons Country Store sells our tomato pie and quiche, and then there’s Buie’s Market in Winston-Salem. We can also guarantee delivery to the door of anyone who wants pie.”

Marcie likes to share pies with the community, including taking them to the homeless shelter. She said there are a lot of valuable lessons to share with their two boys based on their predicament.

“We could have sit at home and collect unemployment because frankly the unemployment is pretty cushy,” Marcie said. “But as same time, what are you doing with your time? Let’s get out and work because when that runs out and we can’t have that or need that then we’re self-sufficient. That’s a good feeling and lot of life lessons we’re trying to teach our kids through this. We’d like to keep going.”

And as they have made progress in their endeavor, business has also picked up for the owner of Canvas Cake Studio, so the Bouleys, who live in Pfafftown, are looking for a bigger kitchen.

John, who has 30-plus years of experience as a chef and previously did work at Wake Forest (and helped head the effort for events related to the 2000 Presidential debate) is considering doing deboned turkeys and perhaps casseroles for the upcoming holiday season.

Certainly, he didn’t see 2020 working out the way it has.

“This wasn’t anywhere on the radar,” John said. “I would only go back to being an executive chef if I had to — if I can make a living doing this.” 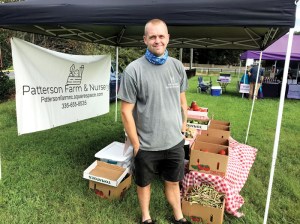 John Ingino claims to be a chef and a farmer, but after Fratellis Italian Steakhouse closed in March because of the coronavirus pandemic, he decided to make farming — which he had started doing as a hobby three years ago on the side — as his “all-time thing.” He is co-owner of Patterson Farms & Nursery and a regular at the Clemmons Farmers Market. Photo by Jim Buice, for the Clemmons Courier.

Ingino, the co-owner of Patterson Farms & Nursery, was working as a chef for Fratellis Italian Steakhouse in Winston-Salem when the pandemic hit. He had been there for the last six years and previously was the executive chef at Willow’s Bistro — also for six years — along with other restaurants.

“I’m a chef and a farmer,” said Ingino, who is from East Bend and admits to having greater respect for food after taking on both roles. “So when the pandemic happened, I had the farm on the side that I’d been working on just as a hobby, and I’m trying to make it my all-time thing now. I didn’t go back to Fratellis. I have an 8-year-old daughter to take care of, and I can’t send her back to school. So she is homeschooled now. I’m trying to adapt to everything.”

Ingino’s garden is 20 acres, but he was quick to point out that “it’s not all planted. We’re trying to start small and kind of work our way up. We have a 100-foot by 40-foot greenhouse that we’re trying to winterize and continue along with a lot of this stuff.”

The farm was founded by Ingino in the spring of 2017 and named after his grandfather, Tom Patterson, who was the original owner of the property.

In addition to the market here, he and his partner do markets in Archdale, East Bend and King, and are looking to sell out of stores while also sourcing restaurants such as Mozelle’s and 1703 Restaurant & Catering, both in Winston-Salem.

“The more the merrier,” Ingino said of the business, “but we only have so much. I can definitely sell more than I can produce. That’s a good thing. Hopefully, we can solve that problem sooner rather than later.”

That includes selling to fellow market vendor Pieson, which sets up shop regularly just across the way at the Clemmons market.

“They get tomatoes and basil pretty much weekly,” said Ingino, who hopes to keep the “farm thing” going beyond the hopeful return to normalcy in today’s world.

“I’m trying to stick with this,” he said. “It’s nice to have that automatic check every week, but this is a better quality of life for sure.”