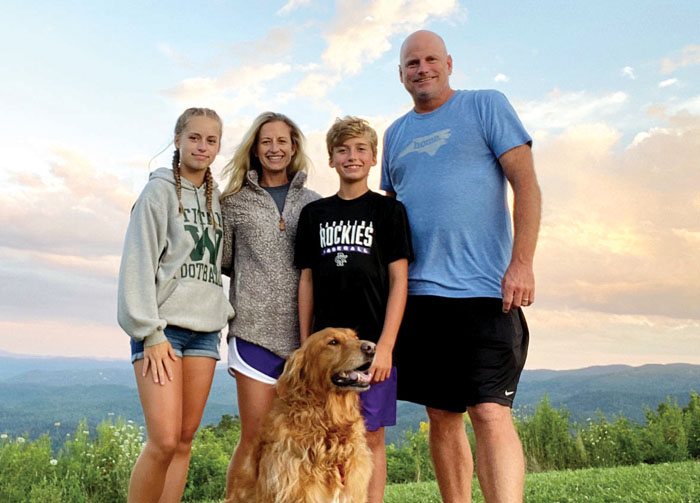 Margaret Bovender has always considered Clemmons to be home. “I loved growing up in an area where there was so much emphasis on community,” explains Bovender. The West Forsyth High School alumna enjoyed playing sports like swimming and soccer for her school. “I made lifelong friends from my experiences,” Bovender notes.

When it was time for Bovender to decide what direction she planned for college, she chose the University of South Carolina. “I thought that I wanted to work with dolphins or become an underwater archeologist and South Carolina had one of the best programs for that. I realized after my first year there though that I wanted to go into medicine and transferred back in state to the University of North Carolina at Charlotte,” says Bovender. She loved the nursing program and the options being in Charlotte gave her for her clinical studies.

“When I graduated, I interviewed all over the country but ultimately I decided to head back to Clemmons to be close to family,” recalls Bovender. “I accepted a position in the operating room at Novant Health Forsyth Medical Center.” Another factor to consider in Bovender’s decision was her soon to be husband, Brad, who grew up in the Clemmons area as well. “I knew my husband from long ago because we had a lot of friends in common. He was also friends with my older brother. After high school, we kept running into each other and started dating during college,” reflects Bovender.

Brad and Margaret had their first child, Hannah, in 2006 and son, Colby, in 2009. “When my daughter Hannah was born, I was finishing up my master’s from Duke University which allowed me to specialize as a family nurse practitioner,” says Bovender. “It was hard on top of having a newborn baby because I still had 100 hours of clinical work after my degree. I was lucky though because I had a huge support system of both mine and Brad’s parents.” Bovender was able to work two shifts a month as a PRN, a Latin term meaning, “As needed.”

Once Bovender decided to begin working more hours in the medical field again, she decided to work in plastic surgery where she worked for almost two years. “It was challenging though because the surgery schedules would often keep me there later into the evening, and I wanted to be home with my family,” says Bovender. When a friend of Bovender told her about a position at Novant Health Hillsdale Medical Associates that was becoming available, Bovender went in to be considered for the family nurse practitioner position. “Colby was just two days old when I went in and interviewed for the job. I was openminded about it because I wanted a change of pace and a schedule that would work better for my family. I’m so glad that I did because it’s such a great group. We are all very close, and I appreciate that I have the opportunity to weigh in on decisions about the practice,” explains Bovender. “I really enjoy working with patients to understand health issues and find solutions. Everyday is different and I get to see a variety of patients.”

Bovender’s position has truly allowed her to enjoy having the time to watch her children grow up and be a part of their lives and interests. “It seems like just yesterday that Hannah was the first kindergarten class at Morgan Elementary School. Now Hannah is already a freshman at West Forsyth and on the junior varsity cheerleading team. As a family, this time of year we would typically be watching West Forsyth football every weekend because Brad coaches it, but sadly with COVID-19 that’s on pause for now. It’s so fun because the coaching staff and teachers at West care so much about the kids. They are so invested. It’s neat to see that on the flip side as an adult and parent. I really enjoy watching Brad as a teacher and a coach to the kids. He really gives it 110% and has a talent for it,” says Bovender.

Although some sports have been put on hold, Bovender is still able to watch her son play for the Rockies baseball team because it’s outside. “Our family has a real love for participating in sports and spectating, whether it’s West Forsyth, college, semi-pro or pro,” mentions Bovender. “Even though everything is looking different now, we still try to stay active as a family. Luckily, my children and husband share my enjoyment for that. Being a mom has made me feel so blessed. I don’t think you ever realize you could love something or someone so much. Everyday is something different but it’s fun to see the world through their eyes,” remarks Bovender.

Bovender’s sense of family and importance has been inspired but the generation ahead of her and Brad. “I feel lucky to have Brad as a partner and best friend. We have had great examples by both his parents and mine who have been married for over 50 years. Their relationships are still fun and it’s reassuring to see what’s ahead,” smiles Bovender.

Our neighbor’s appreciation for community and family reminds her daily of what’s most important in life. As the former first lady Barbara Bush once noted, “When all the dust is settled and the crowds are gone, the things that matter most are faith, family and friends.”