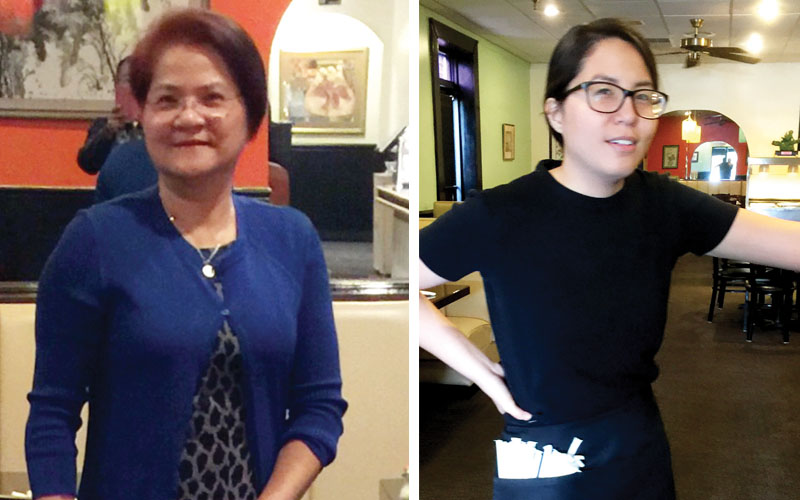 Judy Heng, the owner of the Mandarin Chinese Restaurant in the Meadowbrook Mall in Clemmons, left, and her daughter and employee Serene Liew, right.

Even during the best of economic times, there are many challenges facing a restaurant owner. About 60% of new restaurants fail within the first year and nearly 80% close before their fifth anniversary. The challenges are particularly great for independent restaurant owners who are not affiliated with a national or regional franchise.

The Mandarin was the first restaurant that Heng purchased after moving from Raleigh to Clemmons. She has since opened a second restaurant called 18 Malaysia on Martin View Lane off of Country Club Road in Winston-Salem.

The creative entrepreneur sponsored an open house soon after she purchased the Mandarin in 1994 and offered a free meal. She fondly remembers a large turnout that helped the restaurant have a good start under her ownership. Heng eventually expanded the restaurant to provide additional seating for her customers.

The Mandarin has been a popular choice for both lunch and dinner for Clemmons residents for the past 26 years, and most of the customers have enjoyed the expansive buffet that features many Chinese specialty items.

Like other restaurant owners around the country, Heng has been struggling to keep her business running successfully for the last six months. The coronavirus pandemic caused the shutdown of indoor dining during Gov. Roy Cooper’s implementation of Stage 1 mandates, and when those restrictions were lifted, restaurants could only offer inside dining at 50% capacity during Cooper’s Stage 2 directive.

This presented a unique challenge for Heng because 90% of her business before the pandemic was the buffet at her restaurant. Although there are a variety of lunch and dinner menu options, she noted that nearly all of her customers visit her restaurant for the buffet. “It has been really difficult because most of the customers have always come here for that,” she said.

It is currently not financially feasible for Heng to offer the buffet due to the limited number of customers who are dining inside so she has been relying mostly on take-out orders. There was an uptick in business initially during Phase 1 because many restaurants in the area including most Chinese restaurants were closed. When those restaurants opened to offer take-out orders, business for the Mandarin restaurant leveled off.

Business is currently at about 60% for Heng compared to what it was before the pandemic, but she is determined to persevere until everything returns to normal. “I enjoy seeing customers coming here and enjoying our food,” she said.  She looks forward to having more of them dining inside when the current restrictions are lifted.

Heng is quite proud of her daughter Serene who graduated last year from the University of North Carolina at Greensboro. Her undergraduate degree is in sustainable tourism and hospitality. Serene is among the seven employees who are working for her mother at the Mandarin restaurant. Heng and her daughter share a special bond that was strengthened when she spent quality time with her after selling the restaurant before purchasing it again when Serene went to college.

Her daughter and her employees are the lifeblood of her restaurant, and Heng is grateful for their support. “I have some employees who have been with me for many years,” she said, “including one who has been with me since the day that I opened.”

Hopefully, things will improve soon for the restaurant business and especially for the Mandarin restaurant which has been a staple in Clemmons for many years.

The Mandarin is currently open every day except Mondays from 11 a.m.-9:30 p.m. A variety of appetizers and dozens of lunch and dinner options featuring chicken, pork, beef, and seafood are now available for both pick-up and indoor dining. The restaurant is located in Suite 17 in the Meadowbrook Mall in Clemmons across from the old K-Mart parking lot. The phone number for pick-up orders is 336-712-1009.