Blue Ridge to beach: Clemmons native to cycle 500 miles from Asheville to Wilmington in two days 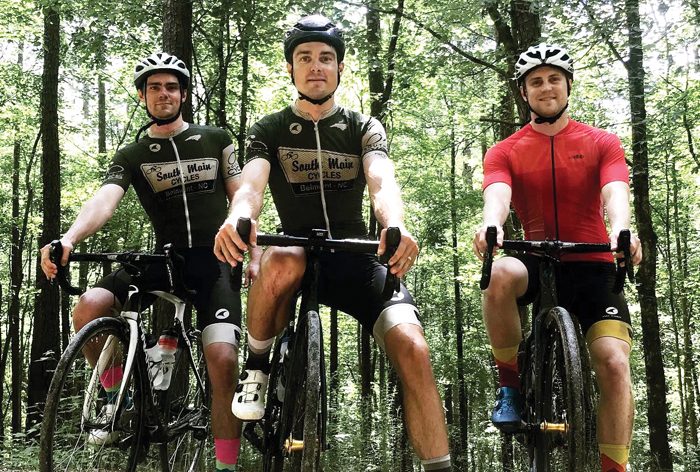 The Bissette brothers. From left, Matthew, Michael and Randall. Michael, a bicycle racer, is planning to ride 500 miles from Asheville to Wilmington in two days.

Michael Bissette is going to ride his bicycle 500 miles in two days — a trip from Asheville to Wilmington. Sound a little bit crazy? Way too extreme to be achievable? Well, then you don’t know Michael Bissette.

A Clemmons native and graduate of West Forsyth High School and North Carolina State University, Bissette loves nothing better than pushing himself to the extreme; setting a serious challenge for himself and then plotting a strategy to achieve that goal. Doing something the easy way would never cross his mind.

While there have been many adventures over his almost 30 years of life, one of the more recent challenges was bicycle racing. Four years ago, he took up the sport and quickly found himself winning races and establishing himself as a serious competitor. In that short four-year period, he competed in between 40 and 50 USA Cycling-sanctioned events and moved from a Category 5 rider to the top level as a Category 1. He achieved that ranking after the only event this year due to the COVID-19 pandemic — a race in Georgia where he finished first. While the pandemic has pushed bicycle sales to record levels, the sport of bike racing has been seriously impacted, much like lives, jobs and recreational activities around the globe.

“I had plans this year to continue training with a friend, Chester Triplett, to participate in the tandem cycling event in the Paralympic games. Chester was honorably discharged from the military after a loss of his central vision,” Bissette explained. “When we met, his goal was to someday participate in the Paralympics. The tandem event is the only one in this competition that allows a competitor to team up with someone who does not have an impairment. We were training and looking forward being able to pursue this goal, but with the COVID-19, the Olympics and Paralympics were postponed until 2021. 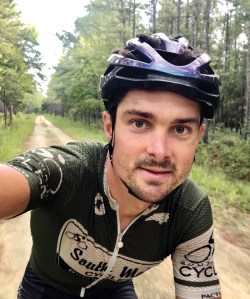 So, while waiting for the opportunity to continue that quest, what does an adrenaline junkie like Bissette do? Well, in this case, he decided to pair his love of bike riding with a desire to inspire others to find ways to be active outdoors, and his interest in being of service to the community. Riding that 500 miles will not only satisfy his need to be outdoors challenging himself, but will also raising money for Feed the Carolinas, based in Clemmons. The nonprofit organization is a collaboration of the 10 Feeding America food banks in North and South Carolina.

“With the onset of the virus, many people have looked for new ways to conduct events, and Endurance Magazine has the idea for a Blue Ridge to The Beach challenge,” Bissette explained. “What they created was an event that would challenge people — bike riders, runners, swimmers and even walkers, to spent six months staying active, tracking their progress and completing the 475-mile distance.” And the good news is you can do this all while still staying close to home. As a participant completes the miles, progress is tracked on an online tracking platform.

If you are interested, information about the event is available at the Endurance Magazine website, and while the event has started, there is still time to join in. Either bike, run, swim or walk 18 miles a week or 2.57 miles per day for no more than six months.

Sounds simple enough, but then again simple isn’t a word Bissette finds all that palatable. Which is the reason he has created his own challenge within the event. With the sponsorship from Whitley Law Firm in Raleigh, Bissette came up with the idea of the 500-mile ride in two days, with the idea of fundraising in support of Feeding the Carolinas. “There were a number of charities supporting the magazine’s event, with Feeding the Carolinas being one of them. I chose this one because they are based in my hometown of Clemmons and because it’s something that needs to be addressed. Food insecurity is a constant stress for many in our state and elsewhere, and even more so in times like this,” he said. His goal for the ride is to raise $5,000.

The two-day ride will start on Oct. 10 in Asheville and from there, Bissette will ride toward Raleigh and then on to Wilmington.

“I’ve done a lot of studying of possible routes that will take me on less congested roads because I need to ride as fast as possible. As it is, I’ll be riding after dark both days.”

This isn’t something a rider can accomplish alone, and Bissette has the perfect teammate in his wife, Emily. “We’ve enjoyed this sport together, being able to travel and explore new places, and in this upcoming event, she will be following in a support vehicle to provide assistance. The endurance it takes to be active at this level requires nutritional planning as well as all of work that goes into the physical and mental training.  I spend the three days before a big event, getting into the right head space,” Bissette explains. One of his favorite quotes from a great cyclist was, “It doesn’t get easier. You just go faster.”  “It has to be about loving what you’re doing and being willing to push yourself. You can’t look at it as having 300 more miles to go. You just tell yourself to get through to the end of the day. Having family and friends come out to support me in the racing I’ve done has been a great motivator.

One of his biggest supporters, Emily, will be posting her husband’s progress over the two days on his Instagram account so that friends and supporters may follow along. “I’ve also encouraged people to come out and ride with me along the way, and I will be making a short stop in Raleigh to meet representatives with the Whitley Law firm for a Q&A and short ride along the Neuse River Greenway.

Bissette’s brother, Matthew, is an attorney with the firm, and also an avid bike rider. In fact, bicycling is a family tradition. Michael’s father, Steve, and his youngest brother, Randall, are also cyclists, and several years ago the two of them rode the entire length of the Blue Ridge Parkway in five days. Michael completed a 200-mile section of that ride on one day, his longest ride to date.

According to Endurance Magazine’s founder, Steve Lackey, more than 5,500 challengers have so far committed to the Blue Ridge to the Beach Challenge and more than 20,000 people across North America are participating in other such city-by-city virtual challenges. More than $350,000 has been raised nationwide and $97,000 in North Carolina.

Bissette estimates that by the time he’s finished the ride, he will have been on his bicycle for 25 hours, burning about 20,000 calories. Sounds like a lifetime of physical exercise for most of us, but without a doubt, there will be another extreme challenge in days ahead for Bissette.

“I do it because it’s exciting and I love to push myself. I would like to be someone who inspires others to reach for bigger things, to discover what they are capable of. I love being outdoors and being active, I’m really looking forward this this ride and all that has to be done to prepare. But I wouldn’t be honest if I didn’t also say, I will be very relieved to dip my front wheel into the water on beach in Wilmington.”

*Anyone interested in donating to Bissette’s team should visit https://runsignup.com/michaelbwhitleylawfirm