Battle of Shallow Ford commemoration to be held Saturday 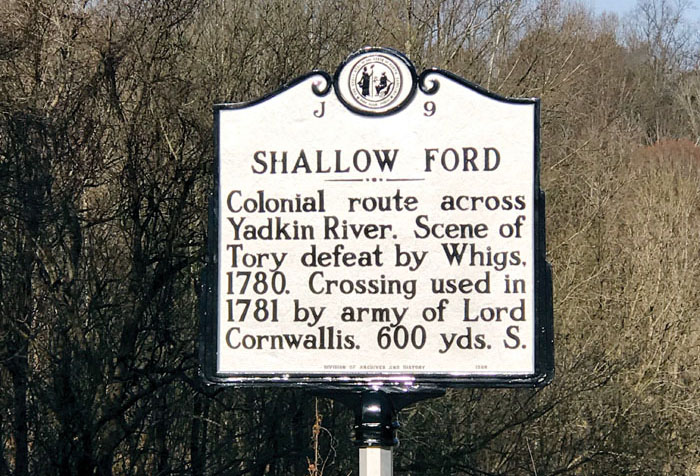 Shallow Ford sign near the Yadkin River. Photo by Jim Buice, for the Clemmons Courier.

This year’s commemoration of the Battle of Shallow Ford will be held outdoors in front of the historic Huntsville Methodist Church, which is located at 4214 Mt. Sinai Drive in Huntsville. All those attending must bring their own chair, wear a mask and observe all rules related to coronavirus pandemic.

It will be the 240th anniversary of the battle, which took place Oct. 14, 1780, exactly one week after the Battle of Kings Mountain. One Patriot (Whig) and 14 Loyalists (Tories) were killed during the battle. The Patriot, Capt. Henry Francis, was buried where he fell. Two of his descendants, who are presently living in Texas, will attend this year’s ceremony..

The Bethabara Chapter of The Sons of the American Revolution (SAR) is the sponsor for the event. The North Carolina SAR Color Guard will participate.  There will be a review of the battle and inductions of several new SAR and DAR members. The ceremony is open to the public.

Along with the commemoration and the history involved, an initiative has been in the works for some time to preserve a large tract of land in Forsyth County that borders the Shallow Ford. Merrikay Brown of the Lewisville Historical Society along with Andy Kelly and Sam McCormick of SAR were inspired several years ago to maintain and promote the history of a site where the Great Wagon Road crosses the Shallow Ford.

The group is working toward finalizing details and looks forward to provide more details regarding the project in the near future.