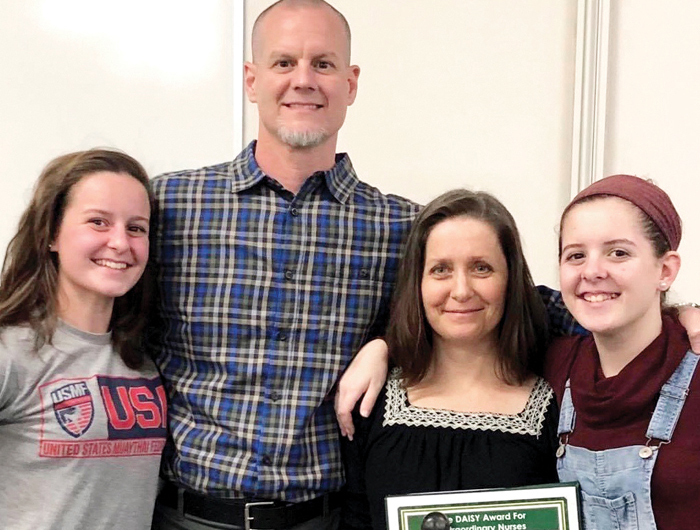 Jennifer McBride with her husband, Chris and daughters, Gillian, left, and Ava, right.

Jennifer McBride has never been scared to chase her dreams and go after what is important to her. Born in Wisconsin, McBride’s family moved to North Carolina when she was in sixth grade. “Even from that early of an age, I knew that I wanted to go into nursing and help people,” remarks McBride. “Although, initially I believed I would become a nun. However, when I learned at the age of 5 or 6 that meant I could not get married and start a family, that helped steer me in the direction of nursing.”

Her own immediate family instilled McBride’s love for family. “I have a fraternal twin sister and we are very close. Although we aren’t identical, we look very much alike and people often confuse us,” notes McBride. “We enjoyed participating in a lot of the same things, like running cross country when we attended West Forsyth High School. That’s where I really developed my love for running. I thought it was a great way to participate in a team sport that also allowed an individual competition component to it. I’ve found that running has always helped me clear my mind.”

When McBride graduated from West Forsyth in 1991, she headed to the University of North Carolina at Wilmington to get her degree in nursing. “My freshman year, I was in the cafeteria and met my future husband, Chris. He was a baseball player and very focused on his sport. It took us 6 months before we went out on our first date, but once we did we were together ever since,” explains McBride. Chris and Jennifer got married in 1996. “From the moment I got out of school, I worked in the critical care unit of various hospitals. I would work the 12-hour shifts several days a week,” says McBride. “We had lived in Australia for a few months because Chris had started playing baseball professionally. However, Chris had developed some serious shoulder injuries so he had to refocus his career and decided to go back to school for physical therapy. We had our first daughter, Gillian, in 2002, so it made perfect sense to move back to Clemmons to raise our expanding family while Chris also went back to school. My family was still there, and I had really enjoyed growing up there too.”

The McBride’s welcomed their second daughter, Ava, in 2005. “I was able to still work the night and weekend shifts at Forsyth Medical Center in the critical care unit when Chris was home with the kids,” mentions McBride. McBride embraced motherhood also. “I enjoyed being involved with them in their classrooms, going on field trips, and helping in other miscellaneous capacities at their schools.”

The McBride’s got a curve ball to their family unit when Jennifer was diagnosed with breast cancer at 41 years old. “I had found a lump and immediately went to get a mammogram. It was really hard for me to be the patient and not the nurse. I worried though about my children, my husband, and my family,” reflects McBride. “I had a double mastectomy and radiation. Radiation lasted for 5½ weeks, every day Monday thru Friday. It was grueling. I worked through the entire treatment course except for the very last week. It was a helpful distraction.” McBride has now been cancer-free for five years.

The grateful breast cancer survivor relishes in still giving back in her community as a nurse. “When the new hospital opened up in Clemmons in 2017, I began working there in their critical care unit,” says McBride. “I just work nights now a few days a week. It works best for spending time with my family. It gives us time to do things that we really enjoy. For instance, we love volunteering at local humane societies. We started helping at Forsyth Humane Society several years ago by walking the animals, cleaning their cages, and socializing them. We’ve even driven a new mom and her puppies out of state to another rescue and enjoyed helping that way.” McBride’s nursing skills have been very useful with fostering as well. “We currently have a 4-week-old kitten from the Humane Society of Davie County that we are getting back to health,” she explains. “It’s very rewarding to help them get a loving home.”

Our neighbor has found that you get what you give. McBride has trusted her instincts along her journey, found strength from her family and friend when things didn’t go as planned, and reaped the rewards of hard work and dedication.